The mayor of the Sicilian city of Palermo, Leoluca Orlando, on Monday granted honorary citizenship to the crews of three boats involved in rescuing human lives in the Mediterranean Sea.

On Monday, the crews of the Mare Jonio and Sea Watch migrant rescue vessels received honorary citizenship of the City of Palermo, alongside Captain Carlo Giarratano of the fishing boat Accursio Giarratano, which had interrupted its work to rescue some migrants at sea.

The honor was bestowed by Palermo mayor Leoluca Orlando.

''This is a day that fills us with joy,'' Mediterranea Saving Humans, the NGO in charge of Mare Jonio, wrote on Facebook. ''Starting today (Monday), the Palermo flag will be flying even stronger on the Mare Jonio. Thank you.''
'For conducting rescues at sea with courage'
''For having conducted with courage, and taking full responsibility for doing so, in compliance with constitutional and international regulations concerning rescues at sea,'' a statement illustrating the reasons for the conferring of the honorary citizenship said, ''of the obligation to recuse those who are in danger and to bring them to a safe port, out of respect for human rights (...) for having a vision that rejects all forms of egoism, that defends life always and in every way, that tries to prevent anyone from having to face death in the attempt to reach European coasts and in so doing moving forward a battle for all of humanity, making the emergency laws of the sea prevail and hoping that they be respected by all and not be exploited for institutional our political ends.'' 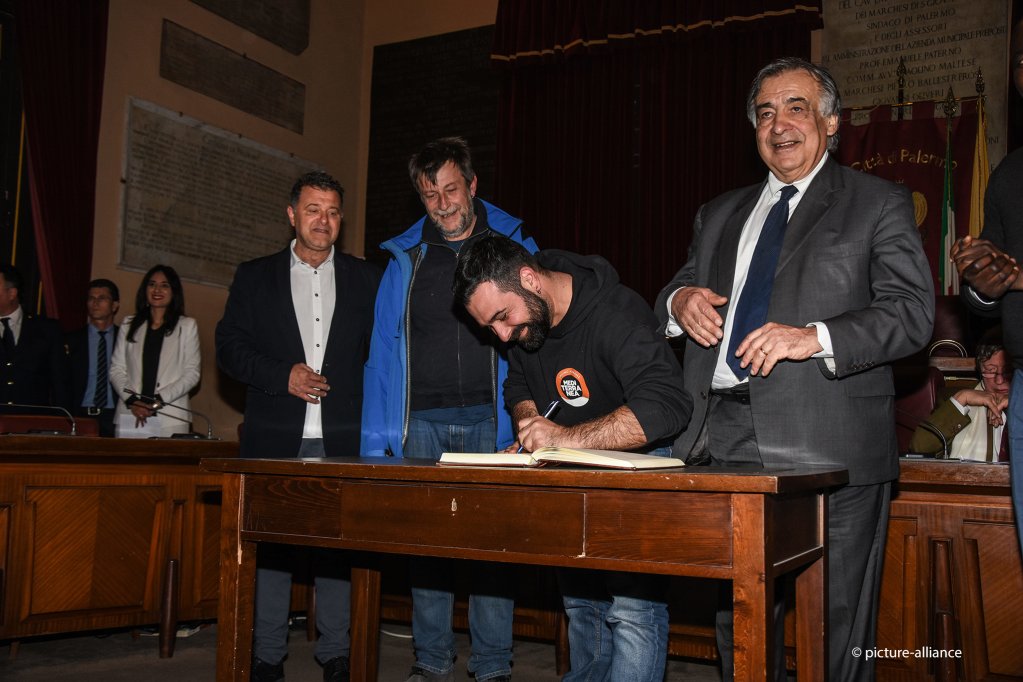 ''For the passion and commitment of men and women who work onboard daily, helping to create an open and supportive city,'' the statement continued, ''based on respect for human life, giving hope to those who have lost it, multiplying bridges between the sea and the ground, rebuilding humanity and defending the rights of every human being.''
'Palermo a land of bridges and not barriers'
Receiving the citizenship on behalf of the Mare Jonio crew were Alessandra Sciurba and Luca Casarini. ''As Palermo resident, I am happy that yet again my city has proved to be a land of bridges and not barriers, a safe port of a Mediterranean Sea that must cease to be a cemetery and the scene for crimes like the Libyan captures. It is wonderful to be here for our companions of the wind, Sea Watch and Carlo Giarratano,'' Sciurba said, according to a statement released.
Pietro Marrone, the captain of Mare Jonio, said that ''until yesterday, I was a man who had almost been arrested simply for having rescued and brought to safety some people. Today (Monday), I am receiving honorary citizenship from Palermo, a recognition that is precious to me and all the crew.''