Out of protest against government plans to build a network of detention camps on the Greek Aegean islands to replace overcrowded existing ones, hundreds of islanders on Thursday demonstrated in central Athens. They announced legal challenges and obstruction of the construction of the new facilities.

On Thursday, Greek officials and residents from Greek islands in the Aegean Sea, hit hardest by the country's refugee crisis, staged a protest in Athens against government plans to build new migrant camps to replace the overcrowded existing ones.

"SOS Moria," some banners read, referring to the notorious Moria camp on Lesbos. "The islands may no longer be camps of lost souls," said others.

The demonstrators from the Aegean islands of Lesbos, Chios and Samos, currently the home of tens of thousands of asylum seekers, gathered in front of the interior ministry and the Parliament in downtown Athens.

Last November, the new conservative government, which came to power in July, announced that the present camps are to close this year. Members of the government argue that the move is vital to properly organize the registration of asylum seekers and deport migrants denied international protection.

With the slogan «Not another #Moria» residents of the North Aegean islands protested in the Ministry of Interior against the govt's plans to create massive closed detention centers. They believe this will deteriorate even more the situation on the islandshttps://t.co/vD12DPXc0V

But island authorities said they were planning legal challenges and blockades at the sites where the new camps are planned to try to block construction.

"We will resist the construction of new camps by all available means," the northern Aegean regional governor Constantinos Moutzouris told Alpha TV at the protest: "We are ready to do everything to find peaceful solutions, provided the government abandons these (requisition) methods."

The government said the new, smaller facilities that will replace the existing camps will be designed to accommodate a total of 20,000 asylum seekers for a maximum of three months at a time. It expects them to be operational by mid-2020. But authorities and residents on the five Aegean islands with camp facilities, which include Leros and Kos, have opposed the initiative.

The present camps on the five islands currently house more than 38,000 migrants and refugees -- even though they have an official capacity of 6,200. Moria alone is home to some 20,000 despite only being built to house 3,000.

Last year, a surge in migrant arrivals -- the number nearly doubled from 2018 to over 70,000 -- caused serious overcrowding at the existing camps as most migrants arrived on the Greek Aegean islands.

Aside from squalid living conditions, there are frequent outbreaks of violence in the camps. Last week, a group of around 300 migrants who marched to the village of Moria clashed with police, who used tear gas to disperse the crowds. Also last week, seven people on Lesbos were arrested on suspicion of forming a vigilante group to attack migrants.

Frustration on all sides

The ongoing deadlock, five years after the height of the so-called refugee crisis, has caused frustration among both island residents and asylum seekers.

UN organizations, human rights groups and the Council of Europe, among others, have repeatedly condemned the dire conditions in the camps. This week, for instance, UNHCR urged Greece to intensify efforts to address the "alarming overcrowding and precarious conditions for asylum seekers and migrants" staying on Lesbos, Chios, Samos, Kos and Leros.

Rights activists and opposition parties have also criticized plans to make the proposed new camps closed facilities as they would restrict the freedom of movement that asylum seekers currently enjoy on the islands.

At the protest in Greece, some banners called for "illegal migrants" to be expelled and for the country's borders to be closed. But some demonstrators chased off former deputies and senior figures in the neo-Nazi "Golden Dawn" party after they joined the protest, an AFP news agency journalist witnessed. 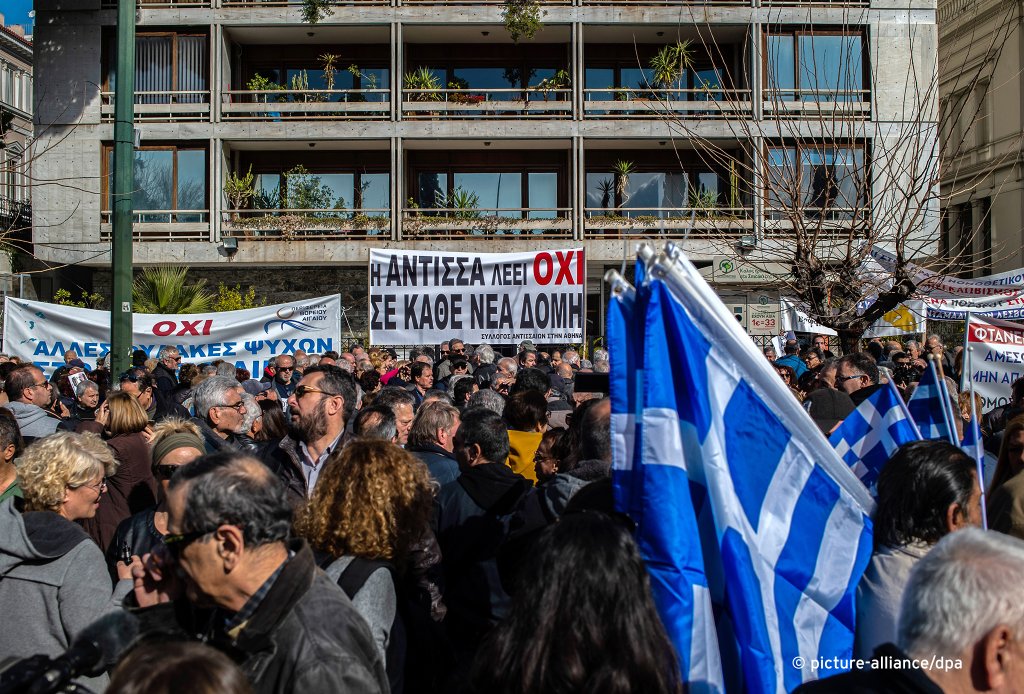 While 2020 so far has seen fewer arrivals compared to the same period last year, the crossing from Turkey appears to become more dangerous -- although many of these islands are mere kilometers away from the Turkish coast.

Whereas migrant deaths on the three Mediterranean routes to Europe halved last year compared to 2018, according to IOM, this year already 63 migrants died trying to reach Greece from Turkey -- more than 20 times as many as in the same period last year.

In January, eleven migrants, eight of them children, drowned off Turkey after a boat taking them to Greece sunk.

Situation 'out of control'

While he told AFP the situation on the islands was "dramatic," UNHCR representative Philippe Leclerc "welcomed the announcement by the government to create new camps," adding that as many asylum seekers as possible needed to be transferred to the mainland in the coming weeks.

But Stratis Kytelis, the mayor of Lesbos capital Mytilene, didn't take the announcement at face value. "We don't believe their assurances that all existing structures will be shut down," Kytelis told the Associated Press (AP).

Kytelis' statement echoed the views of other islanders who demand the immediate removal of most of the asylum seekers and accuse the EU of abandoning them.

"People on the islands ... opened their homes and gave what little they had to help [refugees] but unfortunately, because of bad policies the situation is now out of control," Kytelis said. "Europe has put up walls against us, and trapped immigrants and refugees on our island."

After weeks of talks with local officials, the government this week caused further anger by announcing that land could be requisitioned for a three-year period to build the new camps.

With material from AFP, AP, dpa