Nine people were killed in two shootings at hookah bars in the city. The suspected attacker was later found dead in his home next to his mother's corpse.

The shootings took place at approximately 10 p.m. local time (2100 GMT/UTC) at two shisha bars in different parts of the city.

The alleged perpetrator reportedly opened fire at the first shisha bar in Hanau's downtown, killing three people, before driving to the neighborhood of Kesselstadt and opening fire at a second shisha bar, where five people died. Authorities said that the shooter had "xenophobic motives."

Following the shooting, police sealed off the area while special forces launched a major search.

They subsequently found the 43-year-old suspect dead in his home nearby his 72-year-old mother's corpse early Thursday. Authorities believe that the suspect returned home following the attack and committed suicide.

Police also found a letter claiming responsibility for the attack in the suspect's home, while investigators are also examining a video that he may have posted online several days earlier in which he details several conspiracy theories. They were able to find the suspect's address after following up on witness statements about a getaway car.

Both German Chancellor Angela Merkel and investigators said there are indications that the suspect had far-right motives, including the letter and video as pieces of evidence. Most of the victims had an immigrant background, according to security sources. However, a clear motive has not yet been formally established. 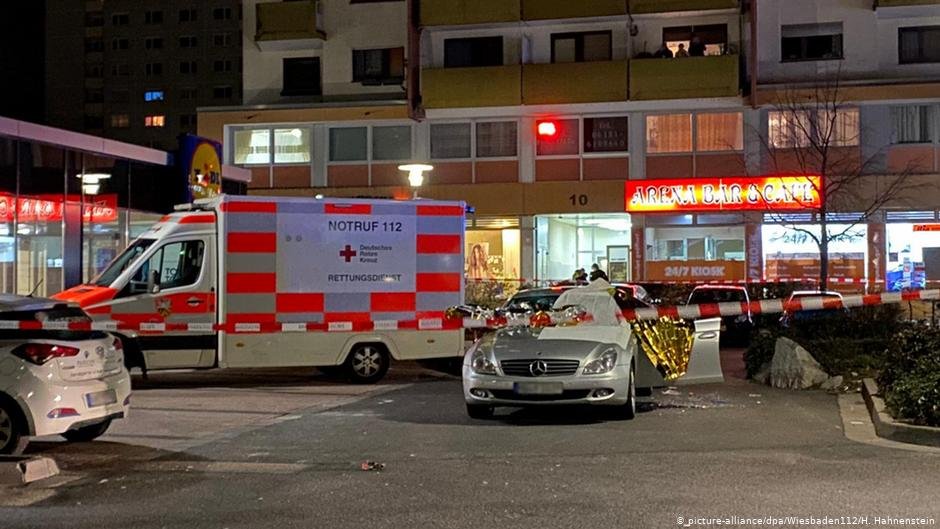 Near miss for local resident

Speaking to DW’s Rebecca Staudenmaier in Hanau, 49-year-old Ali Mengücek recounted the events before the shootings.

Mengücek, who has lived in the area for the last 40 years, said he was walking home with his two children when he saw four men — "all quite tall and fairly young," perhaps 40 or under.

He said they were standing in groups of two, about 30 meters apart. He walked in between them, telling his two girls to pick up the pace.

"I live about 50 meters past where they were standing. When I got home and shut the door, then I heard the six shots. I believe this was six or seven minutes after I had walked past with my two little children. I then opened the window, people were running back and forth and screaming. Within about five minutes, police were on the scene," Mengücek said.

About two hours later he spotted ammunition on the road and reported it to the police.

The shisha bar is a focal meeting point for a tight-knit Kurdish community, said DW's Staudenmaier. Many of the victims lived on the same street where the bar is.

Following claims of a confession letter outlining the suspected shooter's far-right motives, the federal prosecutor took over the case. The entity's involvement is an indication of the severity of the shooting in Hanau, as it exclusively deals with serious crimes and is the highest prosecutory, or police authority in Germany.

The federal prosecutor primarily handles cases of crimes against the state, including treason, espionage and terrorism, and cases involving genocide, crimes against humanity and war crimes.

Right-wing attacks differ from other types of mass shootings and attacks because the perpetrators often have legal access to firearms, said Nils Duquet, a senior researcher at the Flemish Peace Institute.

"It seems like the perpetrator had a hunting permit," he said. "What police forces have been noticing across Europe is that they fear that right-wing extremism is on the rise, and that these people can also have access to guns both legally and illegally. That raises the alarm."

German Chancellor Angela Merkel gave a short statement on the shootings, calling racism and hate "a poison" to society.

"It is too early to say what the background of this incident is but we will do our utmost to explain what happened," she said.

Annegret Kramp-Karrenbauer, leader of the Christian Democratic Union, said on Twitter that she was "stunned and sad," adding that the reasons for the attack must be explained. "Violence driven by right-wing extremism must not be left alone, we must stand united against it."

Senior CDU politician Katja Leikert, who represents the Hanau constituency in the national Bundestag parliament, offered condolences to those affected and thanks to the first responders.

"On this terrible night in Hanau I send those close to the victims all my strength and heartfelt condolences. Hopefully the injured recover swiftly. It is a horrific scenario for us all. Thanks to emergency services," Leikert said.

Speaking on a special "Bild live" show set up by the major German newspaper of the same name, the mayor of Hanau, Social Democrat Claus Kaminsky, said it was "barely possible to imagine a worse evening."

"This was a terrible evening that I am sure we will be dealing with and remembering with sadness for a long, long time," he said.

Germany's government spokesman, Steffen Seibert, also tweeted his condolences. "My thoughts are with the people in #Hanau this morning, where an appalling crime was committed ... We hope that the injured will recover quickly."

A problem with public shootings

"It's clear that there seems to be a problem with public shootings in Germany," said Duquet, referring to January's shooting in the small town of Rot am See, which left six people dead, and a far-right attack on a synagogue in Halle in 2019, which left two people dead.

He added that such an attack can have the capacity to inspire copycats. "It's possible that these recent attacks that we have seen in Germany might lead to more. One of the examples is the Halle shooting perpetrator. He wrote in his manifesto that he wanted to inspire other people to carry out these attacks."

Editor's note: This is an expanded and updated version of a previous article.