The community center in the French village of Cloître-Saint-Thégonnec in Brittany serves as an “alternative school” for migrants and asylum seekers. The students at the center learn everything from French, mathematics and science to the local Celtic language, Breton. The classes, which are offered by volunteers, help the migrants integrate into French society. InfoMigrants went to visit.

It’s Wednesday morning, and it's quiet on the streets of Cloître-Saint-Thégonnec, a Breton village of 650 people. Only the auto repair shop, located on the main avenue, seems to be open at this hour. It is hard to imagine that in just a few moments, about a dozen migrants and asylum seekers will arrive for their daily classes. At 9 am, a white minivan drives up to the community center and drops off a small group of students whose happy chatter and laughter finally breaks the morning silence.

“Welcome to the Alternative School of Monts d’Arrées!,” Samba from DR Congo exclaims with a big smile on his face. As soon as he arrives, he joins his classmates from Mali, Guinea, Iran and Bangladesh to have breakfast together with Christine, a member of the charity group Utopistes en Action. “We eat and then we get to work,” she says from the kitchen of the small community center. In the meantime, four teachers put together worksheets and prepare for the morning classes. It’s Wednesday, and the subject of the day is French.

The unusual school opened in May 2018 with the support of local authorities. “When we started out, we were just a group of residents; we mainly collected clothes. But after a while we realized that the reception centers that were in charge of the migrants lacked proper educational opportunities and so we decided to open up a learning facility,” Sandrine, co-president of the charity, says. Since the school opened, 30 teachers of all ages have volunteered to teach French, English, maths, science, history and geography. Even the regional Celtic language, Breton, is on the curriculum. 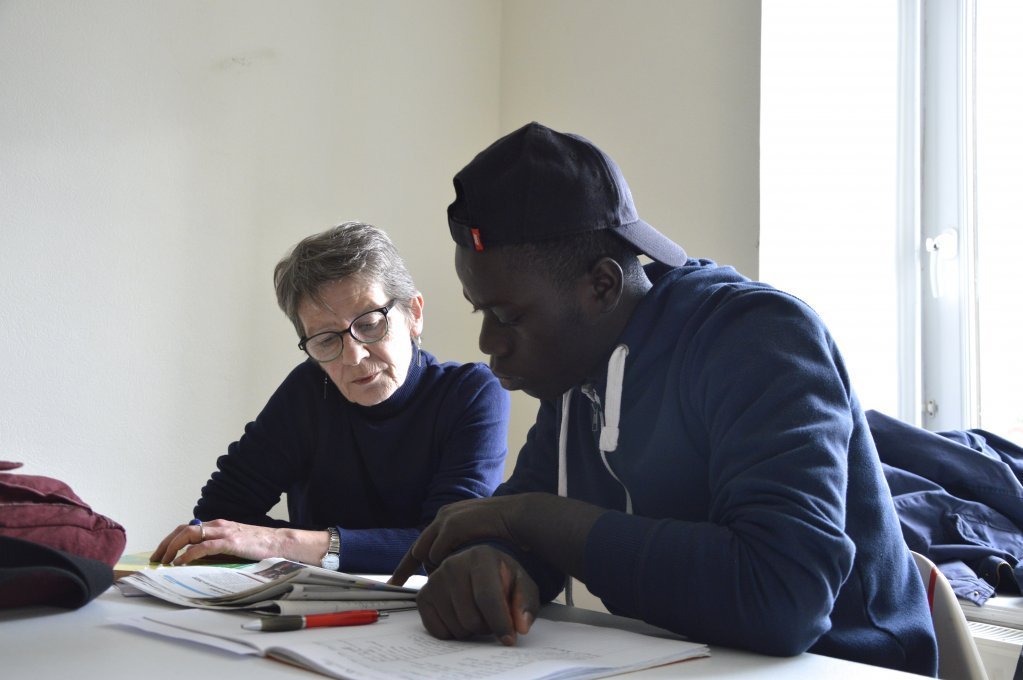 The students who attend the school have often been referred to it after coming into contact with other aid groups in the region. The charity running it, Utopistes en Action, also provides most of them with accommodation, either with local families or in a larger house that Utopistes en Action has rented since March 2019 after receiving funding from municipality communities. Every morning, Utopistes en Action volunteers take turns in driving the “school bus” to pick up the students in the white minivan. The only conditions attached to attending the school is to be present, have the desire to either resume their studies or to undertake vocational training, and to have launched their regularisation processes.

At 9.30 am the classes start. The volunteers divide the students up into groups. Majid and Sufian, from Iran and Bangladesh, stay on the ground floor with Brigitte, who recently retired. “I’m the teacher today,” 34-year-old asylum seeker Majid jokes. For him, French is a brand new language. He is eager to learn and is already translating the words on his worksheet with the help of his phone. “Le chat… The cat!,” he tells Sufian in English. Sufian, who is more reserved and is hiding under his hat, gives him a childish look.

Along with Mamadou, a Malian miner who is practicing reading in the classroom next door, Sufian is the youngest of the students. For them, the goal is to resume their studies in French public school as soon as they are ready for it. “We try to give them a solid foundation so that it won’t be too difficult for them once they’ve enrolled into high school. That’s why we also teach math and science,” Sandrine explains. “My parents didn’t have the means [to send me to school properly], so in Mali I mainly attended night classes,’ Mamadou explains in his still somewhat hesitant French. 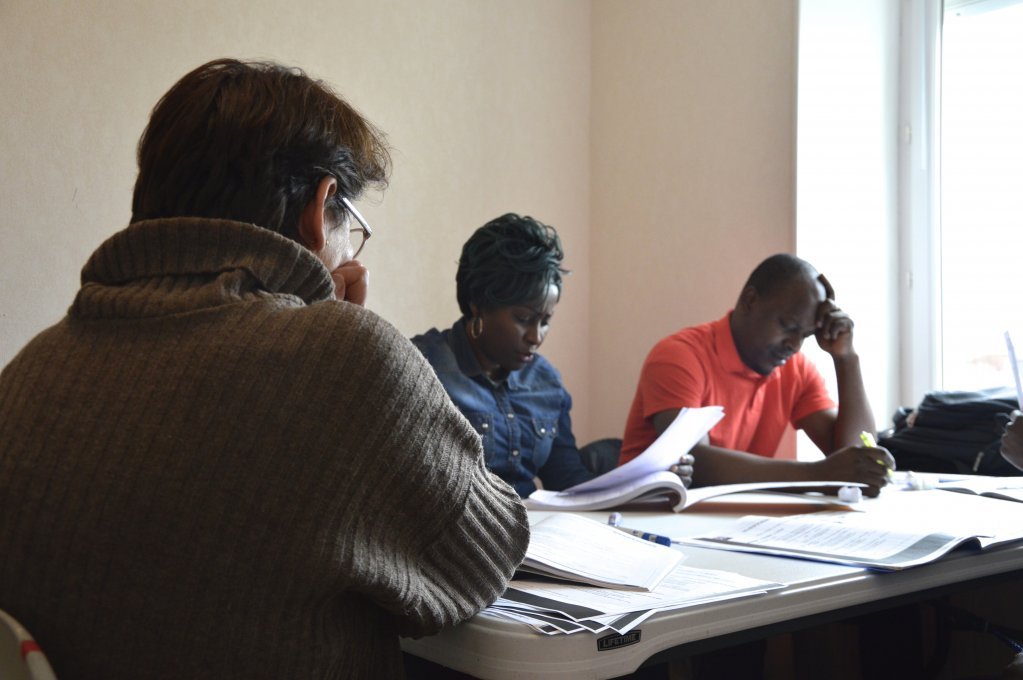 Of the around 50 students who have attended the school since it opened, more than half of them are minors. According to the charity, nearly 70 percent of them have since enrolled in public schools. Aside from the classes, the volunteers also help them get their status as minors officially recognized so that they can get access to the French child welfare services, ASE.

On the first floor, four students are in the midst of learning grammar with Florence, who teaches French as a foreign language. Because of their West- and Central African origins, these students are already French speakers, but the class helps them prepare for official French language tests such as DELF (Diplôme d'études en langue française), which, if passed, will work in their favor during their regularisation processes.

Marie-Claude is from DR Congo and came to France to reunite with her family. She isn’t accommodated by Utopistes en Action, but has sought out the school in order to prepare for her upcoming French language test. “I have my DELF exam in March, it’s a bit of a race to get there!,” she says. Samba has already passed the test with flying colors. The 30-something asylum seeker now wants to train to become a mason. “The school gives us a real chance to integrate,” he says.

But integration is also about being involved in the local community and participating in cultural activities. This is why the students regularly contribute to the local community by helping with the apple and onion harvest, making and selling wood furniture and helping organize the traditional Breton fest-noz festivities as well as the “Utopia festival”. They also guest schools and conferences where they talk about their experiences and explain their reasons for having gone into exile.

21-year-old Guinean Abdoulaye is well on his way to become Cloître-Saint-Thégonnec’s new football coach. The village hasn’t had a football club for years. “We’ll start up again after the holidays, it’s too cold now,” he tells a young blond boy who has come to the school to ask him to play football with him. In Cloître-Saint-Thégonnec, the migrants seem to be more than accepted members of the community, they are appreciated.

After three hours of French lessons, Christine has cooked up a nice hot lunch for everyone to enjoy. The students help her prepare by putting away books and notebooks and set the large table in the main room. The shared meal allows them to take a break before they resume their afternoon classes with two more hours of French. “It’s intense, but it will be like that at school and in a professional setting: we help them get used to the pace,” says Sandrine, who keeps a special look out for her “little guys”. She is demanding, but full of kindness.

From Monday to Thursday, the classes run all day long, while Fridays are free so the students can catch up on doctors’ appointments and administrative meetings. 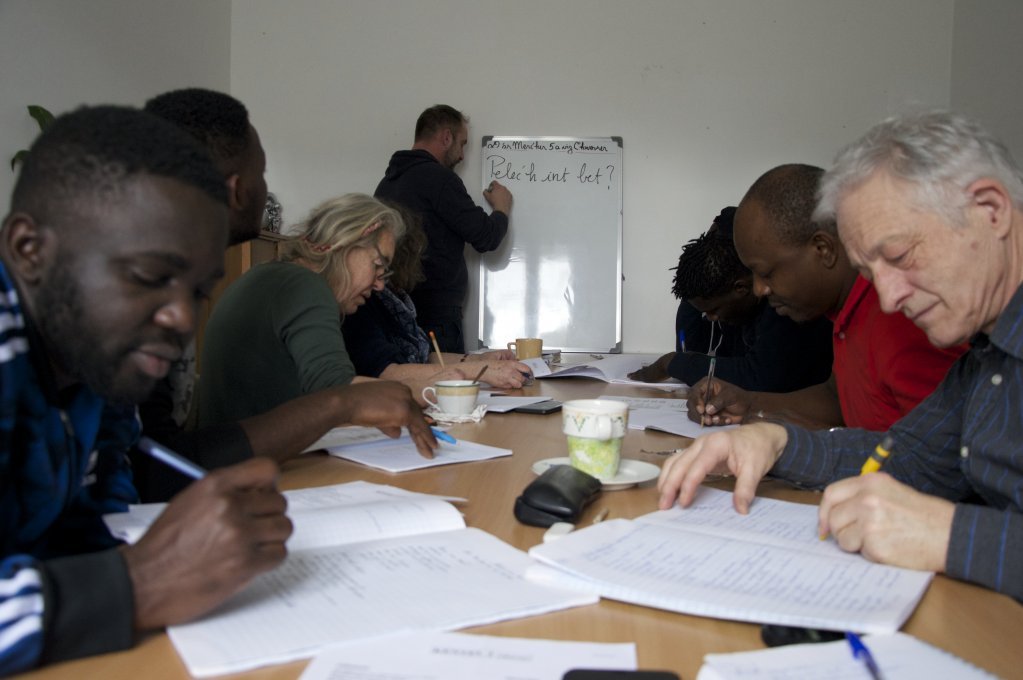 Following Wednesday’s French classes, a more unusual class awaits them: A Breton language class. The class is open to everyone who lives in the village and its surroundings. Even Christine and one of the French teachers have brought their notebooks along to attend the class as students.

Surprisingly, Abdoulaye is the most talkative of them all. "Penaos 'mañ kont Abdoulaye?" (How are you?) Lus, who regularly teaches in a bilingual school in Morlaix, asks. “Mat-tre!,” the young Guinean replies, seemingly very motivated to learn the local language, which is rare even for young Bretons to speak.

“Once, I went into a café and I greeted an old man in the Breton language. The people were surprised and must have told themselves: ‘who’s this African speaking Breton?,’” he laughs. Sandrine says that by learning Breton, the students will be equipped with “a few phrases to strike up a conversation or make people smile”. Many of the students have already fallen for the charm of the region and see themselves staying there. Soleymane, from Guinea, is one of them: “I’ve known Paris, and the [notorious] Porte de la Chapelle. I’m staying here. It’s calmer.”