Greece has 'no right' to suspend asylum applications, UN

The Greek government announced it would suspend asylum applications for one month on Sunday, March 1. It said it was invoking an emergency EU clause to do so; but suspending asylum has no basis in international law says the UNHCR.

"All States have a right to control their borders and manage irregular movements, but at the same time should refrain from the use of excessive or disproportionate force and maintain systems for handling asylum requests in an orderly manner," read the UN refugee agency UNHCR’s press statement on March 2. The statement was responding to the situation at the Turkey-EU border and Greece’s announcement it would be suspending new asylum applications for a month.

UNHCR appeals for calm and easing of tensions

States have right to control their borders and manage irregular movements but should refrain from use of excessive or disproportionate force and maintain systems for orderly handling of asylum requestshttps://t.co/LuJ9hSwH27

Although it was reported that the Greek government's decision to suspend asylum applications for a month was based on an EU emergency clause, UNHCR underlined that "Neither the 1951 Convention Relating to the Status of Refugees nor EU refugee law provides any legal basis for the suspension of the reception of asylum applications."

Our national security council has taken the decision to increase the level of deterrence at our borders to the maximum. As of now we will not be accepting any new asylum applications for 1 month. We are invoking article 78.3 of the TFEU to ensure full European support.

Greece stated it was invoking the emergency clause that deals with a sudden influx of third-country nationals into an EU country. It allows for provisional measures but, according to the UNHCR, only those adopted by the European Council, after a proposal from the European Commission, in consultation with the European parliament. That is to say, the clause does not allow for measures adopted unilaterally by one country.

Even when following the letter of the clause, "it cannot suspend the internationally recognized right to seek asylum and the principle of non-refoulement that are also emphasized in EU law. Persons entering irregularly on the territory of a State should also not be punished if they present themselves without delay to the authorities to seek asylum."

UNHCR emphasized that those arriving at the border were often in "precarious conditions," and included "women, children and families." They said that among the nationalities arriving were Syrians, Afghans, Iranians, Sudanese and others.

'No justification' to leave people stranded at the border

The refugee agency called for international support for both Greece and Turkey to address the situation and said that neither state should be left alone to deal with the numbers of people who were now arriving.

The international charity Oxfam also released a press statement reacting to the situation. "There is no justification for the decision by the EU and the Greek government to leave people stranded in a no-man's land at their borders without access to food, shelter and medical care. Instead of supporting Greece’s efforts to keep people trapped at its external border, the EU should remember its humanitarian and legal obligations and make sure that these women, men and children can safely access protection," Oxfam said. 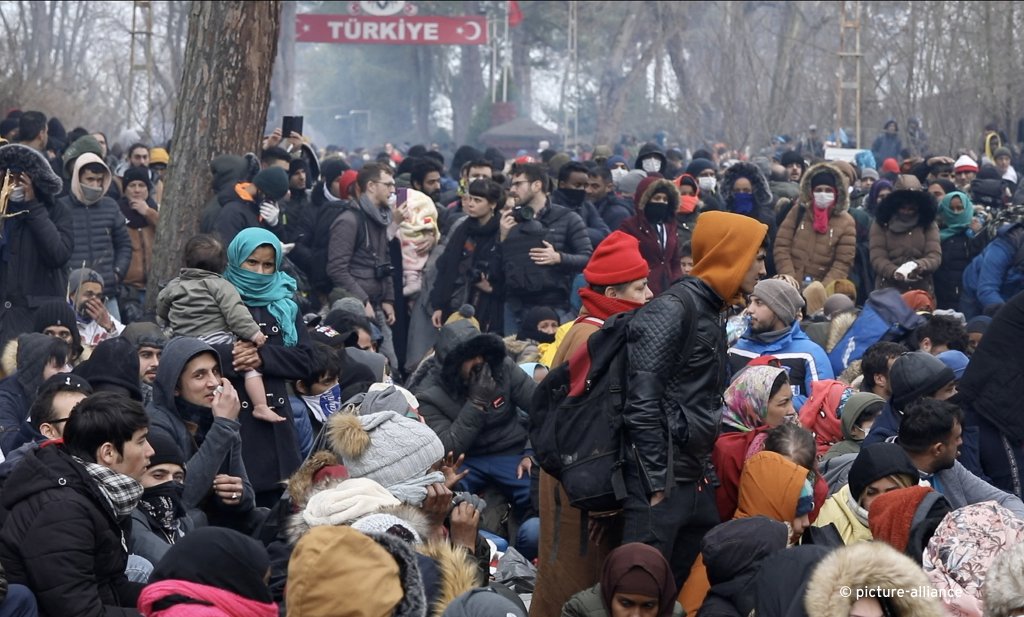 Oxfam's European migration campaign manager Evelien van Ruemburg called the Greek government announcement to suspend asylum "gravely concerning." She said it was "reminiscent of the disastrous lack of leadership in 2015/2016 when no government in Europe wanted to take responsibility for people in need, and the EU concluded its migration deal with Turkey which was fundamentally flawed."

Oxfam said the EU-Turkey deal had turned people in need of safety into political bargaining chips. Van Ruemburg concluded that the EU needed to support Greece and rectify the situation at its external borders. "It is critical that all states live up to both the letter and the spirit of the Refugee Convention, and remember that the EU cannot effectively fulfill its role as a leading humanitarian actor when it continues to prioritize policies of self-interest over the rights and dignity of human beings."

The executive director of the EU border agency Frontex, however, Fabrice Leggeri, said in a statement on March 2, that the agency would be supporting Greece in trying to protect the borders. "Given the quickly developing situation at the Greek external borders with Turkey, my decision is to accept to launch the rapid border intervention requested by Greece. It is part of the Frontex mandate to assist a Member State confronted with an exceptional situation, requesting urgent support with officers and equipment from all EU Member States and Schengen Associated Countries."

Leggeri said that Frontex had already increased surveillance at the Greek borders and was deploying officers from across the bloc "to provide immediate assistance." Leggeri confirmed the agency's core mission as protecting the European borders. That included, he clarified, helping Greece register and screen migrants. That, Leggeri said, was also "important for returns."