Migrants at Turkish-Greek border: 'We want another life'

Thousands of migrants and refugees have gathered at the Turkish-Greek border, desperate to make it into the European Union. DW correspondent Tunca Ögreten spent two days there, and reports a volatile situation.

"Life in Turkey is very tough. As soon as they open the gates, I'll make my way to Germany," says Muhammed, who is from Afghanistan and looks much younger than his 18 years. He's carrying two small bags with some clothes and snacks. Nothing else. He wants to cross over into Greece, but tells me he has no idea what to expect, how arduous the journey will be, how many days it will take — and whether he will actually make it over the border.

I bumped into Muhammed on a street in Istanbul's Zeytinburnu neighborhood, where many other migrants have gathered. Most are from Afghanistan and Pakistan; I only came across one Syrian refugee. Muhammed still hasn't decided whether he will actually attempt the journey to Greece. He knows Turkish President Recep Tayyip Erdogan is using the migrant situation to exert pressure on the EU.

But when, on February 27, Erdogan announced Turkey would no longer prevent people from crossing the border into Europe, many migrants in Zeytinburnu sprang into action. Taxis, buses and cars now line the street, with drivers advertising trips to the Turkish city of Edirne, about 220 kilometers (140 miles) away near the borders with Greece and Bulgaria. 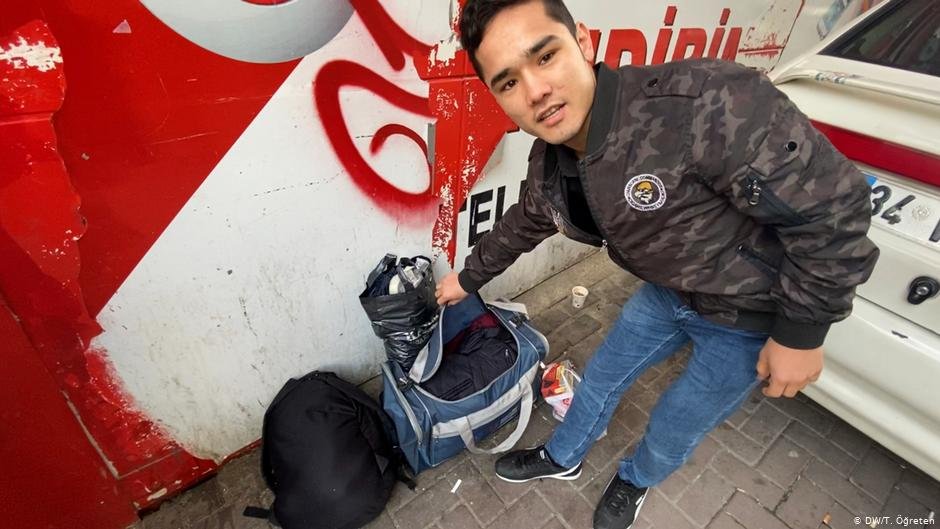 Muhammed and his five friends also want to head to Edirne. So he haggles with one of the drivers, who says he will charge €22 ($24) per person for the three-hour journey — a price the group is unwilling to pay.

I ask about Muhammed's family. He tells me they're currently in the town Nigde, in central Turkey. There, he explains, "they are working for a pittance." Muhammed has been doing various odd jobs in Istanbul and is frustrated by the experience. He says that "either they fire us so they don't have to pay up, or they withhold some of the money we were promised."

Muhammed and his friends eventually agree on a fare — €16 each — with the driver, who promises to drive them straight to the border. But he warns that "if the authorities catch us, I will pretend not to know you. Otherwise, I'll get in trouble." Two hellish days at the border

The group sets off in a gray VW van, and I follow behind in my car. After just 50 kilometers, Muhammed calls me to say that his driver is feeling nervous because I keep tailing them. So he tells me we should meet in Edirne. "Otherwise," he adds, "he will kick us out of his car and keep our money."

Along the way I spot dozens of other vehicles filled with migrants, including women and children, all heading toward Edirne. A few kilometers from the Pazarkule border crossing, I'm stopped by large group of police. Brusquely, one of them asks me what I want. I reply that I am a journalist, and hand over my international press card. He wants to know whether I'm from Turkey or abroad. I tell him I'm from Turkey and, seemingly pleased with my answer, he lets me drive on.

More than 1,000 migrants have gathered at the border crossing. I don't see any Turkish law enforcement officials anywhere. Migrants are sitting on the ground, with some burning branches to keep warm. There is a fair bit of smoke in the air, and the scene is oddly reminiscent of a dystopian movie.

Some migrants have managed to get past the barbed wire and move into the border strip separating Turkey and Greece. But just 100 meters (330 feet) on, Greek border guards have taken up position. Whenever anyone get close to the border they fire tear gas in their direction, forcing them to flee back to the Turkish side. The air is now thick with smoke and tear gas, which along with rain and intense cold defines my time at the border.

In my two days there I see babies crying in their mothers' laps, and people suffering from desperation, hopelessness and hunger. I meet three men in their late 50s on the night after my arrival. Judging by their accents, they're from Istanbul. Their clothes are relatively clean, so they must have arrived recently. One of them asks which border crossing will be opened, to which I reply that there is no plan to do so. They won't tell me where exactly they are from, and I get the feeling they are ordinary Turks trying to mix in with the migrants to cross over into the EU. The men then ponder crossing the border by boat. 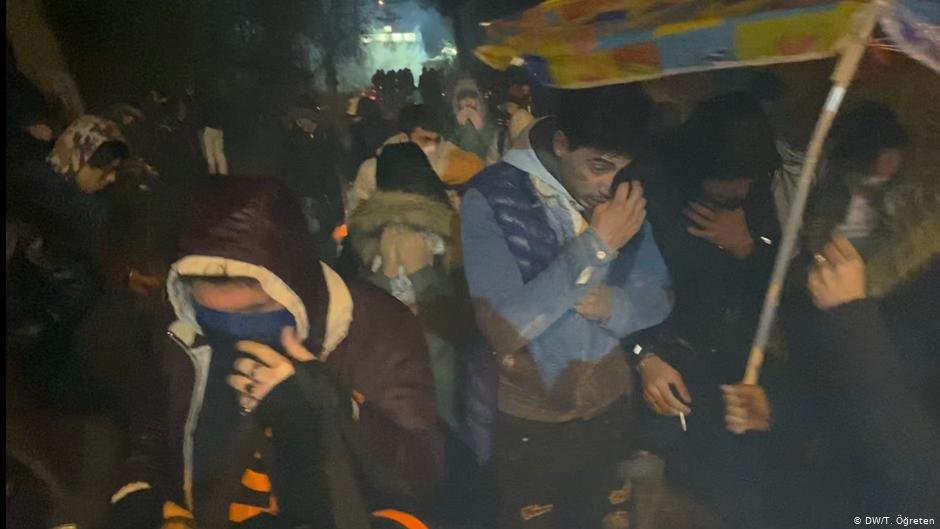 'We want another life'

In the early morning hours of my second day I get a call from Muhammed. He tells me they've bought an inflatable plastic boat for 800 lira (€120/$130) and are now waiting for the right moment to paddle across the Evros River that marks the border to Greece. He sends me his location, hunkered down by a patch of forest, and I make my way over to see him. On the opposite side of the river, only 50 meters away, armed Greek police officers are vigilantly monitoring the situation.

As Muhammed waits, he snacks on a Turkish bagel and then lights a cigarette. As I'm about to take his picture, he gets angry. "What are you doing, brother?! Don't film me! If my mother sees this, she will be very sad," he says, adding: "She doesn't know I smoke, either."

The teenagers are using their phones to pick the best route across the river. Muhammed, meanwhile, tells the other migrants gathered with them that so far about 100 people have made it to the other side. A far larger number, however, were caught and sent back.

Eventually I return to Pazarkule border crossing, where some 3,000 migrants are now camped out. There are people from all corners of the world: Africans, Iranians, Pakistanis, Palestinians and many Afghans. But I meet very few Syrian refugees, however. Tensions with Greek border guards, meanwhile, have intensified.

As ever more migrants make their way to the border, Greek officers fire more tear gas into the crowd. Right in front of my eyes, five people are severely injured — one of them is still a child. The migrants react angrily, with some throwing stones at the border guards.

Amid the chaotic, violent skirmishes, a tall young man throws his hands in the air. In fluent Turkish, English and Persian he yells: "We've had enough of war! Stop throwing stones and sit down. We want another life."