Members and supporters of German far-right groups have been involved in clashes with demonstrators on the Greek island of Lesbos. The right-wing activists have traveled to Greece, they say, to show solidarity with islanders and defend Europe's borders against migrants.

Violence broke out in the Lesbos capital Mytilene on Saturday when demonstrators clashed with members of foreign right-wing groups. A prominent German far-right blogger Oliver Flesch, who had traveled to Greece, was reportedly among the group. Flesch said they were surrounded by up to 25 anti-fascist demonstrators and he thanked the police for “getting them out.”

Reporting on the incident, local news site stonisi.gr implied that the group was connected to a fire in a migrant shelter run by the Swiss NGO "One Happy Family" which burned to the ground. On Monday, the cause of the fire had not been established.

Stonisi had also reported that Oliver Kirchner, a member of Germany’s far-right political party, Alternative for Germany (AfD), was involved in Saturday’s demonstration in Mytilene. Kirchner has denied that he was present, telling the dpa news agency on Sunday that he had never been to the island, or to Greece.

Members of right-wing groups from several European countries have traveled to Greece in recent days to stop migrants from crossing Greece’s borders. Saturday’s incident in Mytilene was the second time in as many days that they have been at the center of clashes.

On Friday, members of the right-wing Generation Identity movement said they were attacked in the port city of Mytilene. An eye-witness claimed that anti-fascists had attacked the men, who were from Germany and Austria, according to Germany’s largest news website, t-online.de.

A photo published on the site shows “a bleeding right-wing extremist with a bandaged head, beside him a member of the [Generation] Identity movement, Mario M. from [the German city] Halle.”

Last week, Katharina König-Preuss, a state parliamentarian in Germany’s left party, Die Linke, said members of far-right groups should be stopped from traveling to Greece. She said there had been talk among extremists about the need to be armed to defend Greece against the refugees.

Greens member of the European Parliament, Erik Marquardt, who has been on Lesbos since February 25, also tweeted on Friday that “there are probably 40 international Nazis, including convicted criminals.”

According to Stonisi, the group that claimed to have been attacked in Mytilene said they were journalists and they wanted to present the “Greek side,” t-online reports. It also says photos show an Austrian member of the Generation Identity and a man who appears to be a politician from the German right-wing nationalist NPD party.

The men reportedly said they were not members of a non-government organization. “Presumably, they assumed that they would have been attacked on this basis,” according to t-online. 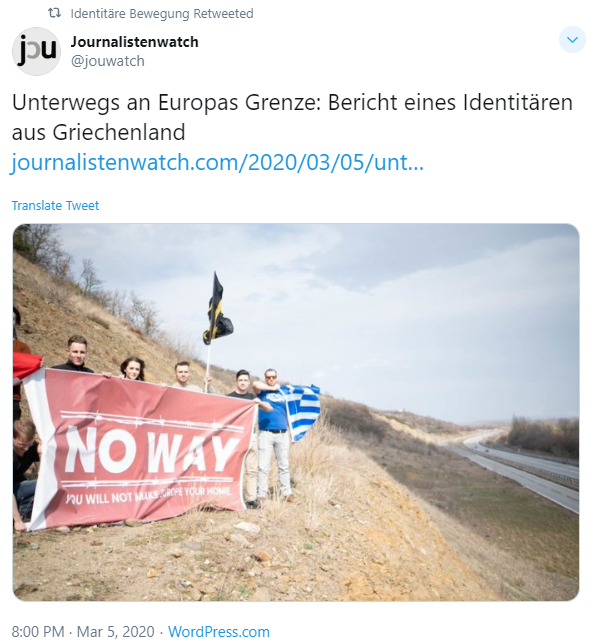 König-Preuss also expressed concern about attacks by far-right activists on refugees, aid workers and journalists in Greece. Several aid groups on Lesbos announced last week that they were suspending work and evacuating personnel because of attacks on staff. Douglas Herman, from the organization Refocus, which teaches media skills to refugees, said “once night falls, there are non-stop attacks on NGOs, on workers, on people who are here as volunteers.” Herman told the AFP news agency that “fascist” mobs were responsible for the violence.

The Dutch group Boat Refugee Foundation, which provides medical care in the Moria migrant camp on Lesbos, told the agency that aid workers’ cars had been hit with steel pipes, adding that the violence seemed to be led by a “small group of right-wing extremists” who wanted to prevent more migrants from coming.

On Monday, the crew of a human rights observation ship Mare Liberum, docked in Lesbos, said they were attacked by a mob of fascists who shouted, threatened them and poured fuel on the deck.

Police have opened an investigation after the reports of several attacks, AFP reports.