Fake news? A war on social media over migrants at the Greece-Turkey border

Greece and Turkey are engaged in a proxy war on social media over what is happening on the border between the two countries. Since Turkey announced on February 28 that it would no longer stop migrants crossing into Europe, causing thousands to rush to the border, both sides have accused each other of carrying out abuses and spreading fake news.

There is nothing new about animosity between Greece and Turkey, or the use of social media for political or ideological ends. But since late February, the conflict on platforms like Twitter and Facebook over the situation on the border between the two countries has reached extraordinary levels.

Unverifiable photos and videos have been shared on social media by both sides, leading to further accusations and causing tensions to escalate.
When Turkey accused Greek border guards of killing migrants, including one who was shot during clashes at the border, the Greek government posted a video on Twitter insisting that this was "fake news". 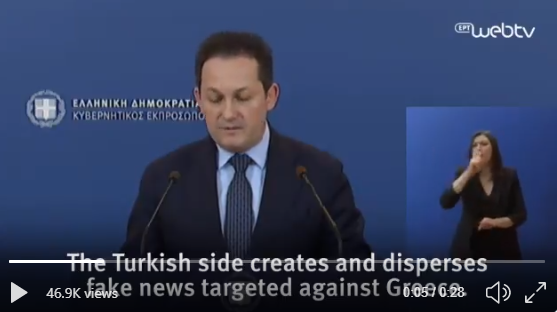 Greek authorities accused Turkish forces of setting off smoke bombs and tear gas on the Greek side of the border and giving migrants wire cutters to cut the fences intended to keep them out, to which Turkish Foreign Minister Mevlut Cavusoglu responded on Twitter, accusing Greece of "spreading fake news about us".
In the same tweet, the foreign minister used the hashtag #GreeceAttacksRefugees, which shows videos of the Greek coast guard using a pole to beat migrants in an inflatable boat, of migrants saying that they were forced to strip by Greek police, and of a child who looks to be suffering from a tear gas attack.
Meanwhile on Greek Twitter accounts, according to Reuters, the hashtags #GreeceUnderAttack and #GreeceDefendsEurope have become common.

On Monday, a video circulating on social media appeared to show a tractor on the Greek side spraying liquid towards the border fence, covering hundreds of migrants on the Turkish side. Some said it was a farmer spraying pig urine along the border. Others said it showed Greek police and farmers spraying chemical weapons.
According to Reuters, one of the accounts frequently retweeting videos and commentary from the Turkish side has been Russia Today, the Russian international media network funded by the Russian government. "Turkish propaganda with fake videos," commented one person on a video on Twitter on March 9 titled "#Turkey claims Greek soldier 'fired' at migrants."
Elsewhere on social media, photos show migrants apparently being stripped to their underwear after being caught on the Greek side of the border and then sent back. Others show Turkish forces allegedly trying to dismantle parts of the border fence to make it easier for migrants to cross.
Establishing whether such photos are authentic is often difficult. Investigators from the Bellingcat journalism website, which specializes in fact-checking, looked into claims that Greek authorities have used a lethal type of "extended range" tear gas, after images and videos were posted on Instagram and Facebook of expended munitions near protests by migrants. They concluded that this "may" be the case.
Other groups, such as France 24 Observers try to verify photos and videos. However, fake information online is an increasingly common phenomenon, Observers warns. "Almost anyone can now make, upload and share misleading photos or videos."