Human Rights Watch (HRW) has sharply criticized Greece for holding over 450 migrants on a navy vessel docked on the Greek Aegean island of Lesbos. The organization referred to a Syrian on board the ship who reported inhumane conditions.

More than 450 migrants who arrived in Greece after March 1 are currently held on a navy ship docked in Mytilene port on the Greek Greek Aegean island of Lesbos. Due to the one-month suspension of asylum applications in Greece, they are not allowed to claim asylum at this moment.

NGO Human Rights Watch (HRW) on Tuesday called on Greece to reverse its "draconian policy" towards the detainment of the migrants on the ship.

"Greece's decision to detain more than 450 people on a naval vessel and refuse to allow them to lodge asylum claims flagrantly violates international and European law," Human Rights Watch said in an online statement from Tuesday, March 10.

The men, women and children on the "Rhodes" navy ship were among those the Greek coast guard picked up starting on March 1, two days after Turkish President Recep Tayyip Erdogan announced it was "no longer able to hold refugees" heading across the EU border. 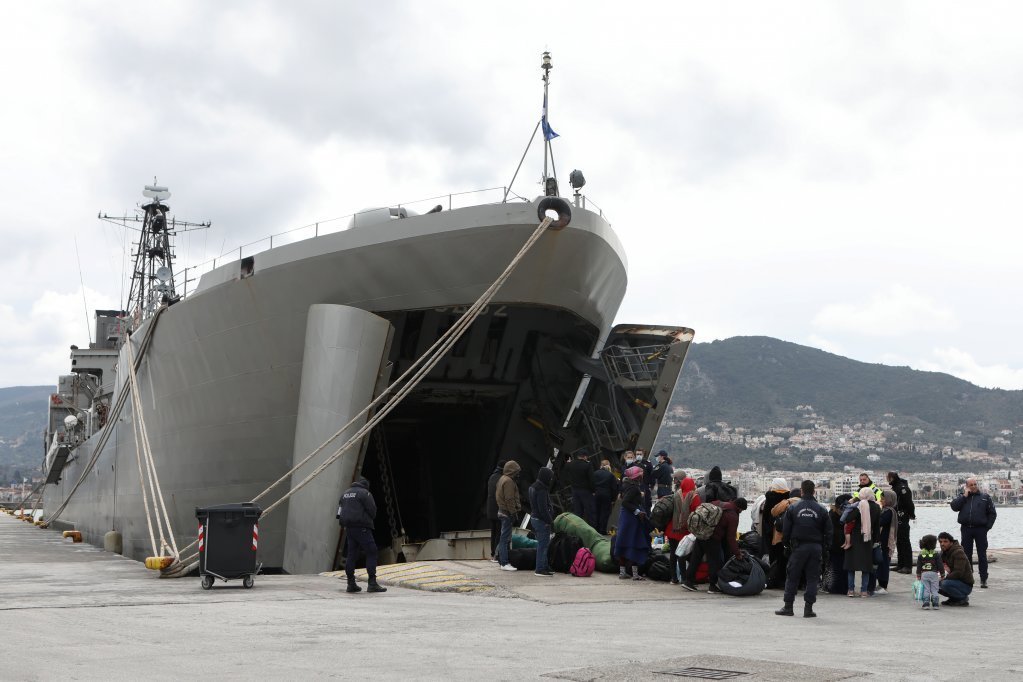 Since Turkey's February 28 decision, more than 1,700 people have arrived on the Greek islands in the Aegean Sea, some of which are located just a few kilometers off the Turkish coast. Many of the migrants who reached Lesbos, which has been struggling to cope with severely overcrowded camps since last summer, were transferred to the ship last Wednesday, March 4.

A Greek defense ministry source last week said the migrants would stay on the transport ship until a new facility to accommodate them had been created on the mainland, news agency AFP reported.

Several reports suggest that the migrants will be transferred to the Greek mainland, where they will be held in detention. According to Greek authorities, the Rhodes only has capacity for around 400 people.

'Arbitrary deprivation of liberty'
Bill Frelick, HRW's director of migrant and refugee rights, called on Greece to "immediately reverse this draconian policy, properly receive these people in safe and decent conditions, and allow them to lodge asylum claims."

Frelick said the Greek authorities had denied him access to the dock area where the detainees were kept during the day -- or to the vessel where they spend the night. However, he managed to talk to a Syrian on the telephone.

“The refusal to allow people in its custody to seek asylum & the open threat to send them back to their persecutors flies in the face of the legal obligations Greece has agreed to and the values & principles it claims to represent.” - @BillFrelick https://t.co/IcxjYUhUWY https://t.co/vj6qcXDic3

According to the Syrian, many of the 451 detainees were women and children. In terms of nationality, most were Afghans, but 118 were Arabs, including Syrians, Iraqis and Palestinians. Somalis, Congolese and others from Africa were also on board as well as pregnant women.

The Syrian criticized the conditions on board. "We had only three toilets for 451 people until today, when they brought five portable toilets. There is no shower, no soap," he said, adding that the children weren't "receiving sufficient food and clothing" and that he had been denied direct access to a lawyer.

Greece's "action may amount to an arbitrary deprivation of liberty," HRW said.

Giorgos Christides, a journalist with German news magazine Der Spiegel, said Wednesday the Rhodes navy vessel was so full asylum seekers had to sleep in buses in the dock area next to the ship.

There’s no more room on board the #Rhodes” navy boat docked in #Lesbos and asylum seekers now have to sleep in buses. They have no right to ask asylum. No one knows when they will be moved or to where. Basic hygiene non-existent pic.twitter.com/0yFY4hLlBv

In Lesbos, close to 20,000 refugees live in miserable conditions in and around the notorious Moria camp, which was built to hold fewer than 3,000 people. With the upsurge in arrivals last week, tension on the island has escalated even further.

On Saturday, demonstrators clashed with members of foreign right-wing groups in the capital Mytilene. The far-right activists had traveled to Greece, they say, to show solidarity with islanders and defend Europe's borders against migrants.

Earlier this week, the Greek government said it would build a new migrant camp around 300 kilometers from the Greek-Turkish land border to house arrested migrants who crossed into the country irregularly.

According to the government, the camp will be built near the city of Serres in the northern Greek municipality of Sintiki. Unlike the government's plans to build similar camps on the Greek islands, which prompted violent protests from locals, the move for the camp near Serres was unanimously decided by the municipal council.

On Tuesday, the New York Times reported that the Greek government was detaining and subsequently expelling migrants isolated at a secret location on its border with Turkey without allowing them to claim asylum. The Greek government denied the report. "There is no secret detention camp in Greece. All matters related to guarding the borders, or involving security, are transparent. The constitution, Greek law and European regulations are in force," government spokesperson Stelios Petsas told reporters.