Italy is in lockdown. Since March 10, the country’s prime minister Giuseppe Conte announced that the whole country would be placed in quarantine until the beginning of April in a bid to stop the spread of COVID-19. The shutdown is placing particular strain on small projects working with migrants.

"Across the whole of Italy they have ordered that all bars and restaurants should be closed at 6 pm every evening until April 3. For restaurants like us, which only open in the evening, that has made things very difficult," explains Pasquale Compagnone, a restaurateur and the director of an integration project, Gustamundo, employing migrants and refugees in his kitchens in Rome.

Gustamundo began life in 2017 when Compagnone, who was already running a Mexican restaurant in Rome decided that the path to integration was through work in the kitchen. He wanted to offer jobs and a chance of integration to cooks from all over the world.

Since Gustamundo opened, it has employed nearly 60 chefs, about half of them women, from several countries around the world, including Senegal, Mauritania, Mali, Ivory Coast, Guinea, Syria, Afghanistan, Iran and Iraq.

The project has two kitchens, explains Compagnone; one for the restaurant and one which provides food for a catering and delivery business.

Since the shutdown announced by Italian Prime Minister Giuseppe Conte on March 10, Gustamundo has had to rely solely on its takeaway business. "We started yesterday [Tuesday] and we had four orders," says Compagnone, admitting that if business carries on like that it will be difficult for his restaurant to survive the month until April 3.

"We are trying to do as much publicity as we can that our takeaway is still open, in the hope that we can keep the project afloat via takeaways until April 4," says Compagnone. The entire menu is still available from Babaganoush (an aubergine dip) and Falafel (fried chickpea balls) and hummus from the Arab world to Somalian Sambusa (samosa like parcels filled with meat or vegetables); Gambian rice dishes, Senegalese Mafé stew with peanuts and beef, to Moroccan tajines and Ethiopian lamb kebabs. 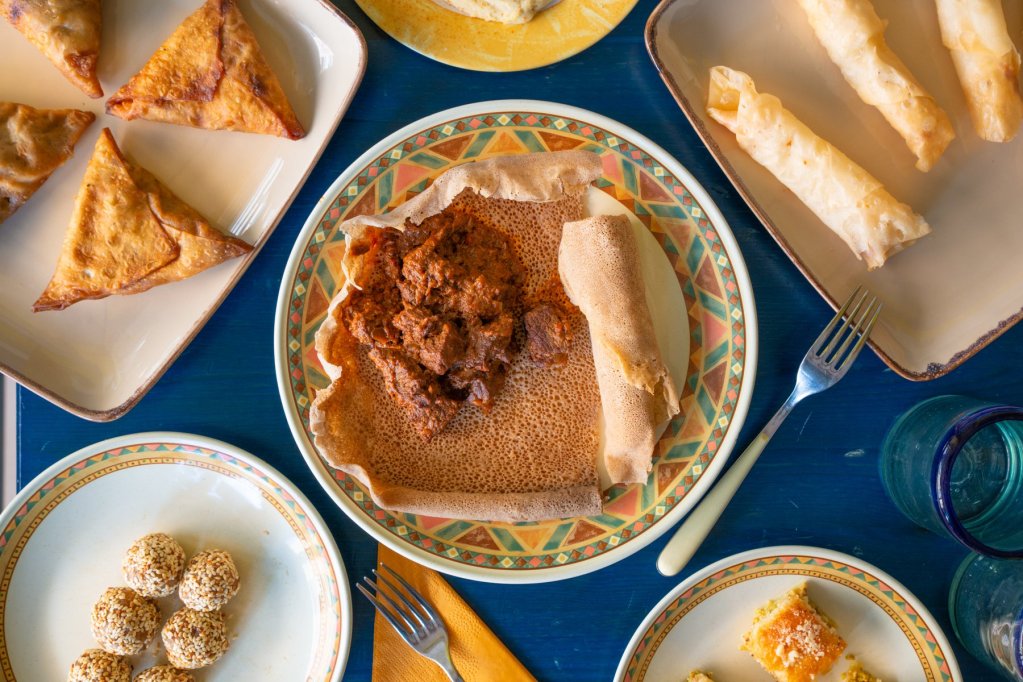 'Each dish tells a story'

"Each dish tells a story," reads the tagline on the menu. Like the story of Ilyas Mohamad from Kashmir who has refugee status in Italy. He has been cooking a selection of Pakistani dishes from his homeland since the start of the project in the hope that he can make enough money for two of his children to join him in Italy. Ilyas Mohammad is 48. Prior to 2009, he and his wife were running a restaurant in a village in Kashmir and were happy. His wife died and Ilyas decided to set off on a long journey towards Europe. He left behind two children and he is hoping that they can join him soon in Italy with the support of Compagnone and his job at Gustamundo. 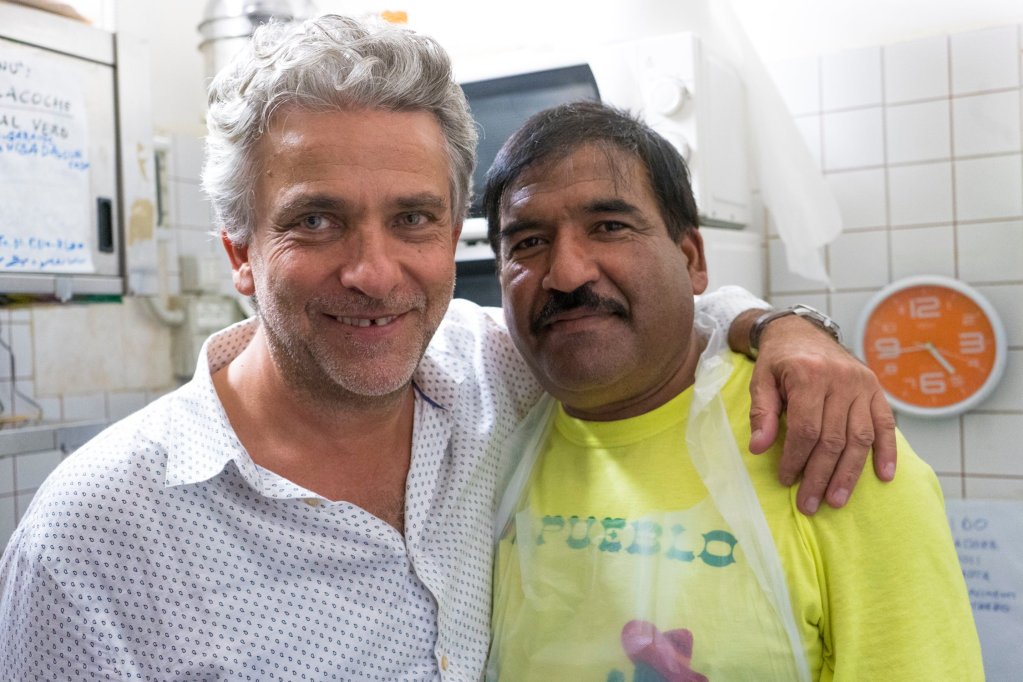 Now with the shutdown, people like Ilyas are worried about their jobs. Jáfar, another of his colleagues from Iraq, who is 22, joined the restaurant team just a few months ago. He was excited to start, but now he, like everyone else, has been asked to take holiday that he hasn’t yet accrued, says Compagnone. Jáfar works greeting and welcoming people in several languages, including near perfect Italian. Until the beginning of April, his job is not needed at all.

The local wardens came by last night just to ask us what we were doing, explains Compagnone. For the next few weeks he and one migrant chef have authorization to be present to prepare the takeaways and deliver them but opening the restaurant is strictly forbidden.

No compensation for businesses

Compagnone explains that so far the government has not offered any compensation to help businesses and projects like his to cope with the shutdown. One member of staff was due to sign his contract next week, says Compagnone. He is understandably worried as he has had a lot of problems converting his residence permit to a work permit. It was only with the contract at Gustamundo that things finally seemed to be paying off, and now this happens. 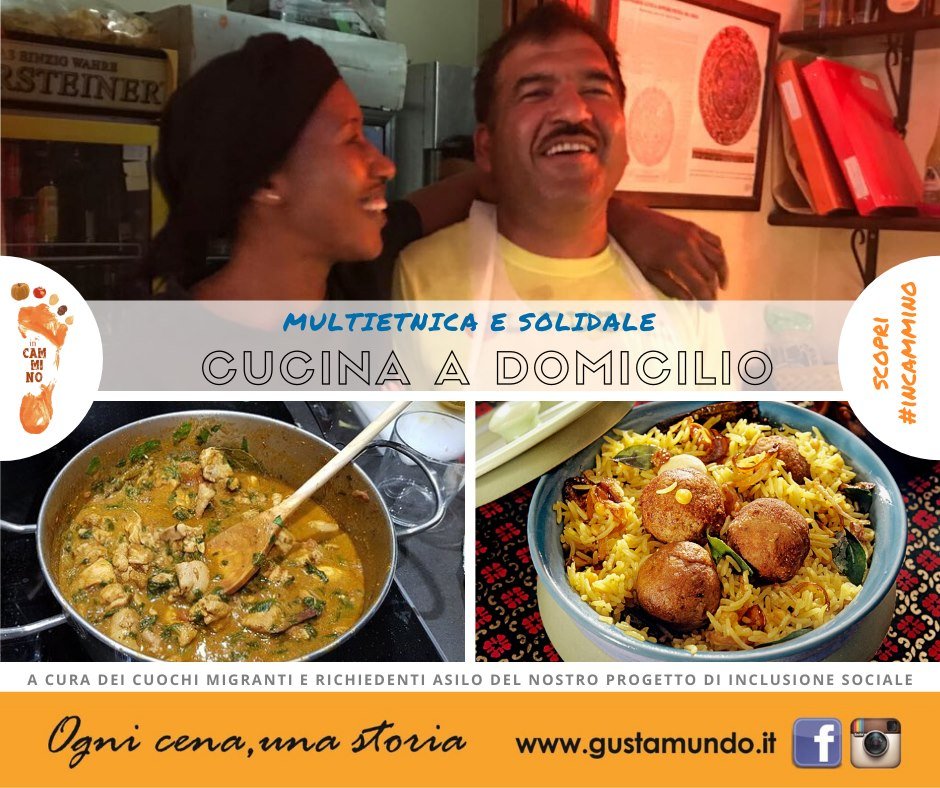 "I’ve told him not to worry, that we will sign the contract anyway and giving them holiday will at least allow them to pay the rent until the end of the month," says Compagnone, but if the shutdown continues, the future seems more than a little uncertain.

'I will not have any work if it continues like this'

Jáfar told the news agency Thomson Reuters Foundation that even last week people had stopped coming to the restaurant. "I will not have any work if it continues like this. Not only me, but all the people I know will not have any work anymore," Jáfar said. Jáfar fled Iraq when he was just 15 and arrived in Rome a few years ago, via Finland. He now lives with his mother and brother in Rome and has a five year refugee visa.

Gustamundo is not the only business to be affected. Thomson Reuters foundation spoke to Francesco Fanoli at Rome’s busy Esquilino market not far from the central station. Fanoli and a group of volunteers used to collect any left-over fresh fruit and vegetables that would otherwise be thrown out, in order to give them to migrants and Italians via a foodbank.

Fanoli told Thomson Reuters that his activity had to stop "last Saturday because it’s very difficult to maintain the one-meter distance between people." Fanoli said he was "sad" that they had to close but thought "it is safer to take precautions."

According to the UN Refugee Agency UNHCR there are about 350,000 migrants, refugees and asylum seekers living in the country. Far up in the north of the country in the Piedmont region on the border with France another project, Villa Quaglina, which provided training for migrants and asylum seekers whilst their cases were being assessed has also been suspended reports Thomson Reuters. 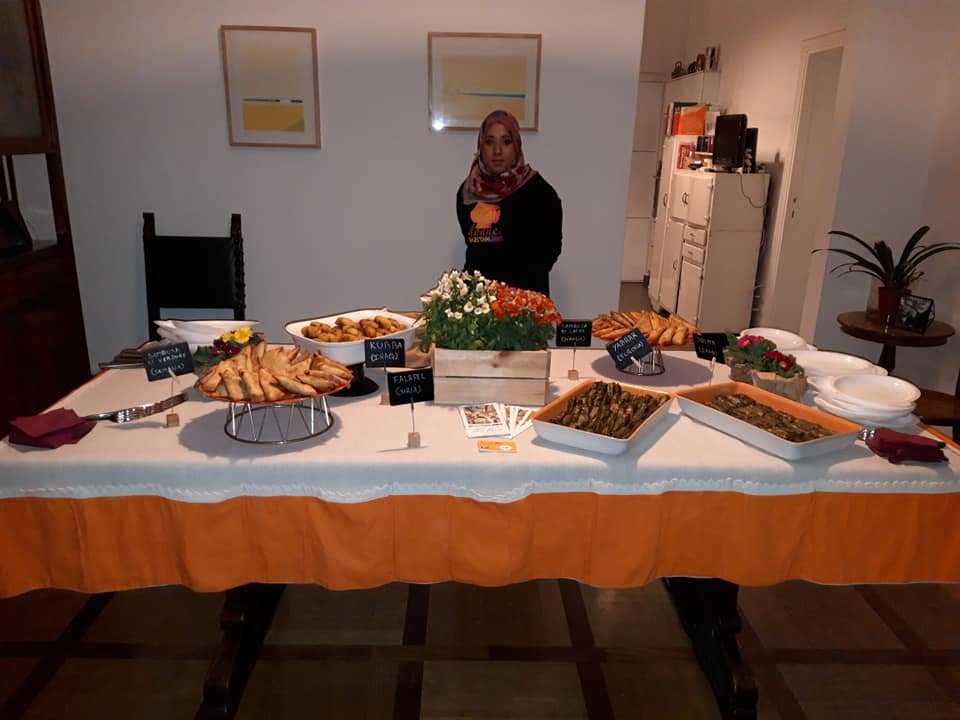 Thomson Reuters quotes the founder of Villa Quaglina, Alberto Mossino: "We have different types of training, for the farm or in the kitchen or to become a mechanic. We have Italian lessons at the school and at the shelter. They were all suspended last week."

His project played host to about 40 asylum seekers. "Many of them don’t have a lot of things to do during the day and that’s a problem," Mossino adds.

On the website for the pro-migrant organization Melting Pot another group of migrants who are living in a CAS, an emergency welcome center for migrants in Bologna have written an open letter explaining the dilemma they now find themselves in as a result of the measures put in place to contain the coronavirus.

They explain that when they have to attend immigration appointments they are expected to wait outside in the open, only allowed to enter the offices in groups of three. However, back at the CAS center they are forced to live, work and sleep in overcrowded conditions which essentially go against the measures demanded by the government.

Many of the migrants at the CAS work in a distribution center and their work in the warehouses has doubled because of the high demand of some goods caused by panic about the epidemic. When they are not working, they say that they are forced to sleep in rooms with five or ten people, sometimes with no window to let in fresh air. They say that the CAS has set aside a container to house anyone who eventually falls ill but "are those measures enough?" ask the migrants signing the letter.

Because of the Salvini decree, they add, many of them have no access to proper health care and are forced to pay for even basic medicines. The letter ends by asking Italian institutions what they will do about the overcrowding in CAS centers across Italy. Reminding the government that by ignoring this problem they are potentially putting the health of the whole population in danger, something that neither migrants nor anyone else wants.

Back in Rome, Compagnone is hopeful that Gustamundo can survive the next few weeks. Gustamundo is not a charity, he explains. It is a business and is meant to help people through real work. "We were doing really well, we were riding a wave at the end of last year," says Compagnone. They got great reviews and they were able to take on a few more chefs. The catering business was really taking off. 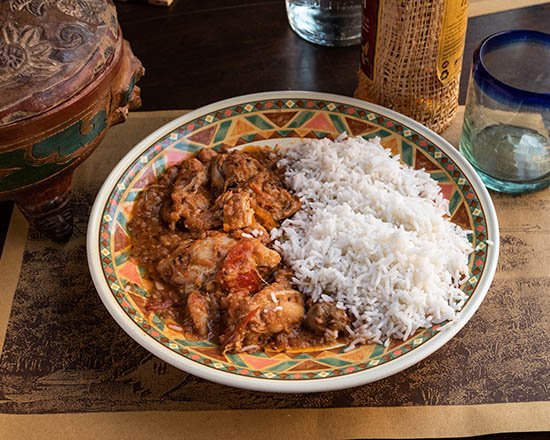 Now the catering side of the business has been suspended and the restaurant is closed and the difference between four takeaways and a full restaurant seems like a huge gulf to fill. "The takeaways will help limit the damage," says Compagnone, cheerfully. "As well as the staff contracts we still have to pay the rent and all the overheads. I think the government is looking into measures to help. There are lots of rumors but we really don’t know what is going to happen. Any measures they do put in place might not help small businesses like us anyway," thinks Compagnone. "They are normally only to help out the really big companies."
He concludes with a smile in his voice that there is nothing much they can do, other than "retain our optimism, [because] without that we are really lost."