Police have responded to a protest by residents of an asylum seeker center in Germany. More than 500 migrants have been placed under quarantine after a man in the facility tested positive for the new coronavirus. Nationwide there are 13 confirmed cases among asylum seekers, a government spokesperson said.

The 533 residents as well as all staff at the reception center for asylum seekers in Suhl in the state of Thuringia have been in quarantine since Friday after one man tested positive for the coronavirus COVID-19. The measures have led to several days of “disturbances” by a small group of asylum seekers in the facility, according to the broadcaster RTL.
At the weekend, some residents tried to leave the facility by climbing over the perimeter fence. They also threw missiles at emergency services, police said. On Monday, about 15 to 20 people partially blocked access to the canteen. Police said the protesting asylum seekers used children as human shields.
A large deployment of police and Special Forces, many of them in protective clothing and facemasks, arrived at the facility on Monday. Police said the situation was defused after talks with the residents. However, RTL reports that more police arrived on Tuesday with water cannons. “There have been significant disturbances since the start of the quarantine measures,” Patrick Martin from the state police told the broadcaster. 22 people were transferred to a former youth detention facility in Arnstadt where they will remain under quarantine, police said.
Mild symptoms
According to a number of reports, the man who tested positive for coronavirus is an Afghan national. He had only mild symptoms and did not require hospitalization. He was taken to another medical center within the facility which has been set up for a maximum of 600 people, said Dr. Marion Peterka.
Two other residents of the center have also been tested for coronavirus after presenting with flu-like symptoms on Saturday evening. Peterka warned that the situation in the center was “precarious”. She said staff, including guards, medical and kitchen staff were also at risk. 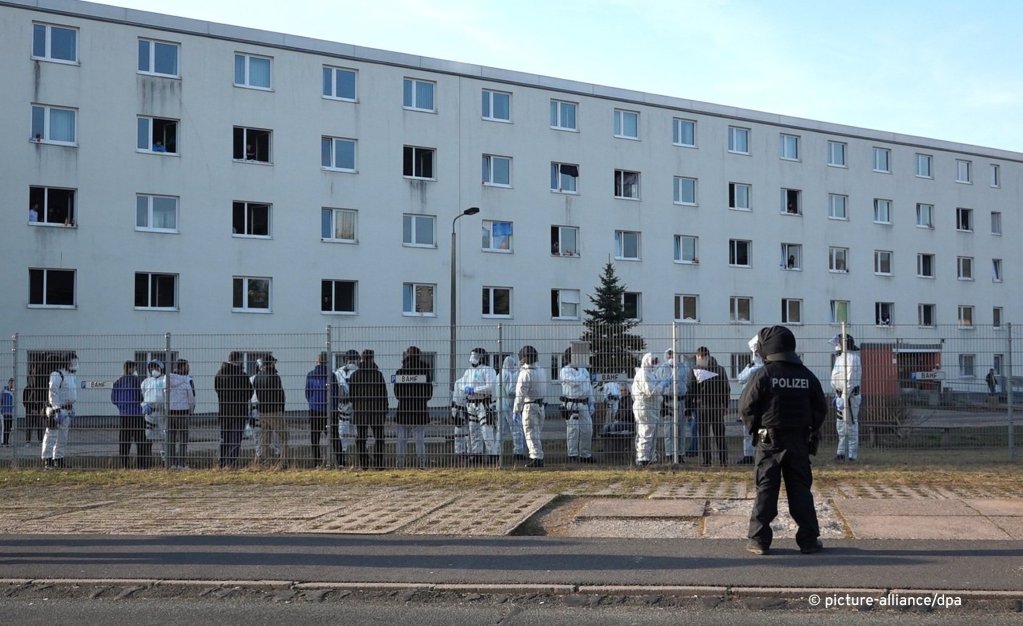 ‘Left alone’
Asylum seekers in the Suhl center feel “left alone”, one resident said. Speaking to local journalists through the fence, the man said there were grave fears for families with children. “We want protective masks, but aren’t getting any,” he said.
“We want a medical examination with a test so that we can be sure, so that the healthy people can leave (the facility) as normal,” the asylum seeker added. “We are trying to stay calm, but I don’t know whether everyone will see it that way if we are kept in here any longer.”
A large number of volunteers have offered to help to explain the situation to residents in their own language. The state Migration Minister Dirk Adams, who traveled to Suhl on Saturday, praised the efforts of volunteers as well as the authorities and police.
As they are unable to leave the center to buy groceries, residents received a delivery at the weekend including cigarettes, chocolate and sweets for the children. Authorities are trying to buy more facemasks in order to offer the residents “at least basic protection,” said Frank Roßner of the state administration office.
Cases of coronavirus infection have been reported at several asylum seeker facilities in Germany. On Tuesday March 17, a spokesperson for the German interior ministry said there were 13 confirmed cases and 31 suspected cases of infection among asylum seekers in several states. "All federal states have taken measures to prevent chains of infection in the respective reception facilities," the spokesperson said.
With dpa