The aid agency Doctors Without Borders is extremely concerned about the threat that the new coronavirus presents to the overcrowded Moria refugee camp on the Greek island of Lesbos. DW spoke with MSF's Florian Westphal.

Greek officials are shutting camps for displaced people nationwide to visitors for two weeks in an effort to prevent the spread of the new coronavirus. Florian Westphal is the chairman of the German branch of Doctors Without Borders. He spoke with DW about fears that the coronavirus might spread in the Moria refugee camp on the Greek island of Lesbos.

How big is your fear that the coronavirus could wreak even more havoc in the Moria camp?

Florian Westphal: We're extremely concerned about the threat the coronavirus presents to the more than 20,000 people living in the Moria camp at the moment. This is a camp that was designed for 3,000 people. So it is more than six times over capacity, and many people are living very cramped together. Some five- to six-person families are living on 3 square meters (32 square feet). That's a catastrophic situation regarding water and sanitation. Unfortunately, this is an ideal breeding ground for a rapid spread of the virus.

What is your biggest fear?

Our biggest fear is that the people are simply not in the position to take the precautions they need to take: In some areas of the camp, there is one water station for up to 1,300 people. The conditions are very cramped. There's no soap; it's impossible for the people to take the most basic hygienic precautions. And that's what's worrying because that means they cannot do anything to stop the spread of the virus if it were to arrive in the camp.

What do you hear from your staff on the ground? Are there any precautions yet?

Our colleagues on the ground report that there is apparently discussion around a sort of an emergency rescue plan, or a crisis response plan, but we don't know what that would look like yet. Generally at Moria, medical care is totally insufficient. There are not enough medics in the camp. We have no idea for the time being how that could be resolved.

From your perspective, does the Greek government have proper emergency planning for the Moria camp yet?

We have heard that they do. And we've certainly started talking with them about that. But the latest information I have doesn't really indicate that there have been very concrete plans as to what they would do if — say in the next couple of hours — we have a confirmed case. That is just something we have to assume and live with as a risk. 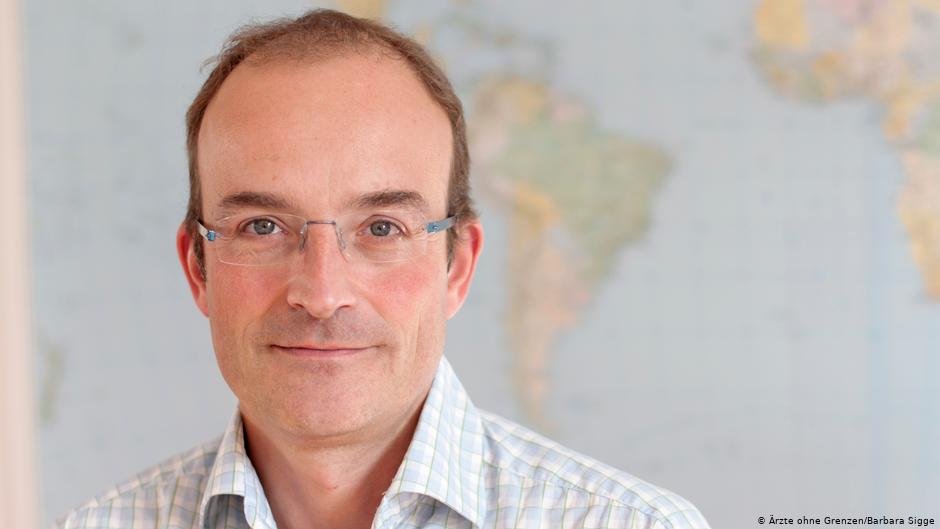 Do you think the coronavirus might already have arrived and just not been tested for yet?


That's always a possibility. We know that one local Greek woman has tested positive. In this crisis, because of this threat, there is only one solution, I think: The European Union must now do everything possible to evacuate these people as quickly as possible. The Moria camp on Lesbos is not a place where you can handle a potential corona threat, and the action needs to come now.

A fire broke out in #Moria camp today leaving behind one child dead, according to the Greek Fire Brigade.

The fire is put out but our medical teams in the MSF clinic opposite the camp are still providing medical and psychological support to those affected by the fire. pic.twitter.com/QFljyRgUQH

What advice is your staff passing on to the residents of the Moria camp?

It is difficult. We all know the advice about how we should protect ourselves against the spread of the virus. But how can you do that there? We tell people "keep a safe distance, wash your hands frequently, use disinfectant," but these things are not available in the Moria camp. That's why people need to be evacuated. That's the only solution and the only way to handle the risk.

Many people there are very vulnerable anyway. There are very sick children there who are suffering from chronic diseases such as epilepsy or diabetes. Others have severe mental health issues, and we have adults, too, who have been traumatized — through violence in their countries of origin or while fleeing to Greece. So it is difficult to predict. But, in principle, all these people are extremely vulnerable to yet another health threat.

You run a hospital outside the Moria camp. What is your biggest challenge?

The biggest challenge right now is the one that it's always been, which is that we're dealing with a crisis, especially a mental health crisis, that we've rarely seen before anywhere in the world. Children are committing self-harm, young children are talking about suicide. They stop eating, stop speaking. We can treat them for the moment at the hospital, but then they always have to go back to where they came from, and that makes them sick. That problem was there before the corona threat, but this threat on top of it is making our work even more difficult.

There is a shortage of water in the camp. So how can people wash their hands and adhere to basic hygiene?

The lack of water in the Moria camp is really dramatic. You have to remember it is located in the wild, in an olive grove. In some parts of the camp, people have built shelters from plastic sheeting. Up to 1,300 people are using a single source of water. Sanitation is a huge problem. Up to 160 people on average are having to use one toilet. That is unhygienic. Protecting yourself against the corona virus is almost impossible in these conditions.

What would you say to people who wonder why their countries should provide refuge to people currently on Lesbos if the island has become a breeding ground for the virus?

The people of Lesbos are just as entitled to our care, health care and our help as anyone is in Germany, anyone walking down a Berlin street. These people are in extreme need: They are human beings. For a continent that keeps claiming that it is so committed to humanitarian values, the simple fact that, for years now at Moria, the EU has been basically walking all over these humanitarian values — that is not an excuse for inaction. The obligation to act is the same as it would be for everyone else who is threatened by this virus .

What does the EU need to do?

Our main demand to the European Union is very clear: You must start now to evacuate these people from Moria. Moria is not a place where they can be treated and protected against a possible outbreak of the coronavirus.