‘I knew life in Greece was hard, but not this hard’

In Greece, thousands of refugees and asylum seekers have been waiting for months, or even years, to be integrated in Greek society or to be allowed to move on to another European country. Some are starting to lose hope. At the Malakasa migrant camp near Athens, more than 1,600 people are struggling to keep themselves occupied.

Farah is sitting by the only table that has been fitted in the white shipping container where she lives with her husband and three children. She is carefully working a mixture of cracked wheat in a blue plastic bowl. With her sleeves rolled up, she molds small, hollow oval shapes of cracked wheat in her hands which she then fills with minced meat and rolls into dumplings. Kibbeh is a Levantine cuisine classic. Farah's three daughters aged 3, 6 and 11 are quietly watching her work.

Farah, her husband Riyadh, and their children, Maya, Dima and Sham, have been living in the Malakasa camp, some 40 kilometers north of Athens, since 2018. Although their container only has two rooms, the Iraqi family feels far more comfortable here than in the tents where they spent their first few weeks in the camp.

Today, they only dream of one thing: to leave the camp and start a new life in another European country. Farah and Riyadh fled Iraq during the US invasion in 2003. The couple settled in Syria, where Farah gave birth to their daughters, but the war finally caught up with them, and in 2017, the family left Syria to seek refuge in Europe.

Their goal was to make their way to Germany, where Riyadh’s family has lived for the past 20 years, but when they arrived in Greece, the borders had already closed.

After spending their first month in a detention center on the island of Rhodes, the family was then transferred to the Greek mainland and installed in the Malakasa camp. Seven months ago, after having waited more than a year, the family was finally granted asylum and handed residence permits and passports which would allow them to travel.

But the family still can’t leave Greece. During the processing of their documents, Greek administration officials confused Sham’s country of birth (Syria) and her nationality (Iraqi), and reproduced the same error in her mother’s documents, meaning their residence permits don’t match their passports.

But they also face another problem: Since they are now officially recognized as refugees, they are required to leave the Malakasa camp. "The IOM (The International Organization for Migration, editor's note) comes around every day to tell us to leave," Riyadh says. He adds that the family has nowhere to go. The family wants to go to France or Germany but without the corrected paperwork, they risk being accused of having falsified their documents. If they try to go to the airport, they will be turned back. 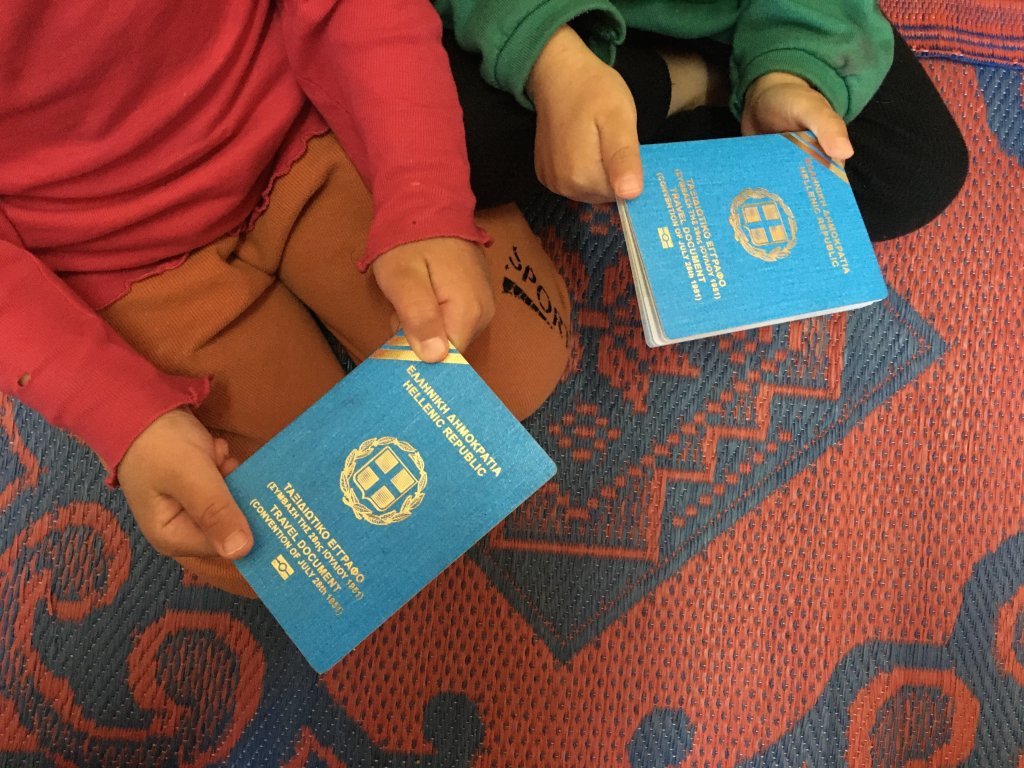 The couple has asked for the errors to be corrected, but the wait is long. The Greek asylum system is completely saturated, and in Greece, which in 2019 once again became the main migratory gateway to Europe, migrants often have to wait more than two years for their asylum interview.

In the Malakasa camp, located on a gravel plain on the outskirts of a village with the same name, a total of 1,611 people are waiting for their asylum applications to be processed.

Managed by IOM, the Malakasa camp is one of the largest in Europe. Children can be seen playing between the clothes lines that have been hung up in the sun between mobile homes.

The school in the neighboring village Ovlona, where children from the camp usually go to, was recently closed due to the coronavirus pandemic.

While the camp’s containers are equipped with both running water and electricity, food is harder to come by. Some smaller shops in the village provide the basic necessities, but if you want to do any real grocery shopping, you have to catch the bus to Athens.

The Greek health services are in charge of providing the migrants with medical care. A doctor visits the camp every day, says Christine Nikolaidou, an IOM spokeswoman.

A few containers down from Farah and Riyadh’s home, Abdul and his wife Maryam recount their daily life in the camp. Originally from Afghanistan and Tajikistan, the couple has lived in Malakasa with their three children for a year and a half now.

Abdul pulls out his asylum certificate from a drawer in the living room. Abdul applied for asylum in May 2018, but did not receive his asylum seeker’s card – which allows him to work for six months -- until in January, 2020. The delay illustrates the slow processing of asylum cases in Greece. 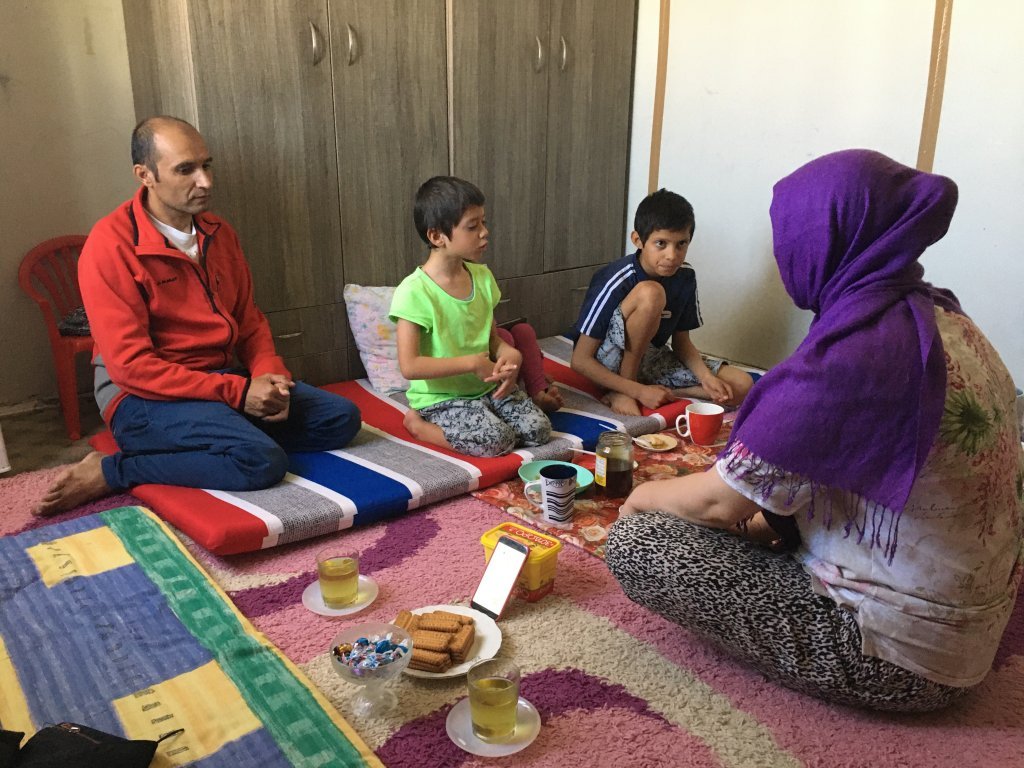 Meanwhile, the family did not have a choice but to get settled in Malakasa. When the school in Ovlona was still open, 8-year-old Habib would take the bus to attend the morning classes, and his 10-year-old brother Adib would do the same to attend the afternoon classes.

But as soon as it gets dark, no one in the family is allowed out. Abdul and his wife are worried about the camp’s security. "In the evening, we hear fights all the time. We’re afraid," Abdul says.

‘Waiting for an email’

Farah, Riyadh and their girls don’t want to go out at night either. In October 2018, a young Syrian was killed in a fight between Syrians and Afghans right in front of their container. Several of the young man's friends were also injured.

Since then, almost all Arabic-speaking families (Syrian and Iraqi) have left the camp. Today 95 percent of camp residents are Afghan, according to figures from the IOM's February 2020 report. Farah and her husband say they fear they will be attacked just because they are Iraqis. For several months, they were too afraid to send their daughters to school.

Three months ago, they finally allowed their two eldest daughters to return to school. In the meantime, both Farah and Riyadh are struggling to keep themselves occupied. Although asylum seekers and refugees have the right to work in Greece, the country’s economic situation makes it almost impossible for migrants to find a job.

Farah, who used to work as a chef in Iraq, tried to get a job in a local bakery. “They told me their family was already in a difficult situation and that it wasn’t possible for them to hire anyone," she says. "I knew life was hard in Greece, but not this hard."

In order to keep herself busy and earn a little bit of money, Farah cooks at home and tries to sell what she makes. While Farah and her eldest daughter wait for Greek officials to correct their documents, the family’s life is on hold. "I spend my days staring at my phone waiting for an email from the administration services," Riyadh says.