Some 600 residents of an "anchor center" in the German state of Bavaria are under quaratine after eight asylum seekers and an employee tested positive for the coronavirus. Meanwhile, the partial lockdown in Bavaria has been extended to April 19.

Some 600 residents of a so-called anchor center ("Ankerzentrum") for asylum seekers in the German town of Geldersheim have been put under quarantine after eight residents and one external employee were tested positive for the coronavirus. That's according to the regional government of Lower Franconia in northern Bavaria.

In addition to the eight asylum seekers, an external employee of the facility contracted the Covid-19 virus, the regional government announced on Saturday via Facebook.

According to the Facebook post, the infected residents are being housed in a separate building on the anchor center premises for at least 14 days. The infected external employee, meanwhile, is in domestic quarantine.

The anchor center is also no longer accepting new arrivals, and transfers to other facilities have been put on hold. Moreover, visitors are no longer allowed and all employees must wear mouth and nose protection. However, residents were still allowed to move around freely on the premises without having to wear protective gear. In the Facebook post, the government described the situation as "calm."

Despite the current partial lockdown curfew ("Ausgangsbeschränkung") in the state of Bavaria, residents of anchor centers and other refugee reception facilities in the federal state are still allowed to go to work, make necessary purchases, visit a doctor as well as "work out and move in the open air."

A spokesperson for the local government told InfoMigrants none of the infected asylum seekers in Geldersheim belonged to a risk group, which include elderly people and those with a weak immune system. He also said all of those who contracted the Covid-19 virus had been staying at the facility "for a while."

Given that the incubation period can take up to two weeks, however, it is of course also possible that the victims contracted the virus before the partial lockdown curfew was introduced on March 21. On Friday, Bavaria's interior ministers announced the Ausgangsbeschränkung would be extended to April 19.

According to information by the regional government, the vast majority of the some 600 asylum seekers currently staying at the anchor center in Geldersheim are from sub-Saharan countries including Somalia, Ivory Coast and Nigeria. The facility, housed in the former US Conn Barracks, can accommodate up to 1,500 people and has ample space. 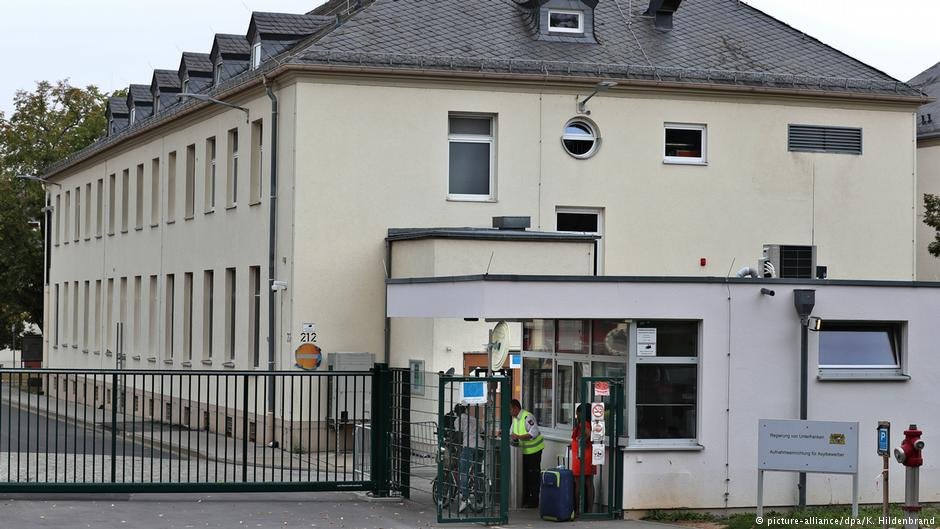 From one former US barracks to another

Last spring and summer, around 800 asylum seekers moved to the facility in Geldersheim from another former US barracks about four kilometers away in nearby Schweinfurt. The barracks had been extensively renovated and are "in essence" the same in regards to accommodation, aforementioned government spokesperson told InfoMigrants last May.

While the asylum seekers, the administration and most connected bureaus and services moved to Geldersheim last year, the local foreigners' office and the local branch of the Federal Office for Migration and Refugees (BAMF) have yet to move to the new site.

The number of admitted people at the anchor center has decreased significantly over the last five years, from over 16,000 people in the second half of 2015 to only some 1,500 last year.

In 2018, three German states including Bavaria turned nine reception facilities into anchor centers, a concept put forth by Interior Minister Horst Seehofer. Asylum seekers are supposed to stay at these centers for up to 24 months while their applications are being processed -- and they either receive asylum or get deported.