The pandemic is dictating Greek asylum policy. The coronavirus forced Turkish President Erdogan to cease blackmail attempts at the border with Greece — but it has afforded Athens the opportunity to push through plans.

In retrospect, it seems that residents of Greece's eastern border regions were justifiably skeptical about the initial surge of displaced people arriving from Turkey. According to media reports, Germany's foreign intelligence service, the BND, suspects that Turkey's government brought displaced people en masse to the border and attempted to incite conflicts between refugees and officials in Greece — in fact, the buses used to remove refugees were the same ones that brought them there in the first place.

On Turkey's border with Bulgaria, there was no activity at all. It would seem that President Recep Tayyip Erdogan was only interested in agitating Greece, where he had hoped to escalate the already tense situation on the islands by inflaming nationalists.

Erdogan's plan was to blackmail the European Union by showing just how broken its asylum policies truly are. He did so with the aim of forcing NATO partners to back him in his most recent military incursion into Syria. Media outlets from around the world offered him a stage. Tensions between the militaries of Turkey and Greece flared. But the novel coronavirus scuttled his plans. Once the world's reporters left, Erdogan was forced into retreat. The virus, it seems, has solved the troubling situation at the border — at least for the moment.

Official statistics put the number of refugees in Turkey at about 4 million, but it is estimated that there are far more. According to Athens, about 100,000 asylum applicants are currently in Greece, with 40,000 of them on the islands of Lesbos, Chios, Leros and Kos. One of them is 20-year-old Somaya, from Afghanistan. She lives in a weatherproof shelter in the official Moria refugee camp — a luxury that few here have. "It is very cold right now," Somaya said. "Life is hard. It has rained a lot."

About 21,000 displaced people live in the ramshackle thicket of tents and cardboard known as the Jungle, which has sprouted up around the official Moria camp on Lesbos. Right now, many of them are worried about the coronavirus. "We have hardly any water, and refugees here have no idea what is going on," Somaya said. "Do they run the risk of infection? I am worried." But she also wants to help, so she volunteers for Team Humanity, a Danish aid group that distributes food and clothing to displaced people at the Hope & Peace Center near the camp. Face masks sewn at the camp are handed out at the center, as well as soap and hygiene instructions.

In March, Greece's government issued a 12-point plan for dealing with the coronavirus in camps for displaced people. As a result, visits and activities within the camps have been canceled and residents can only move around the camps when absolutely necessary. Only one member of each family is allowed to shop outside the camps. Special police buses take them to prearranged shops. All camps are under a general curfew from 9 p.m. The new rules also ban refugees from withdrawing cash from ATMs in nearby villages. The government has said it will install ATMs at the camps, but there has been no word on exactly when that will happen. 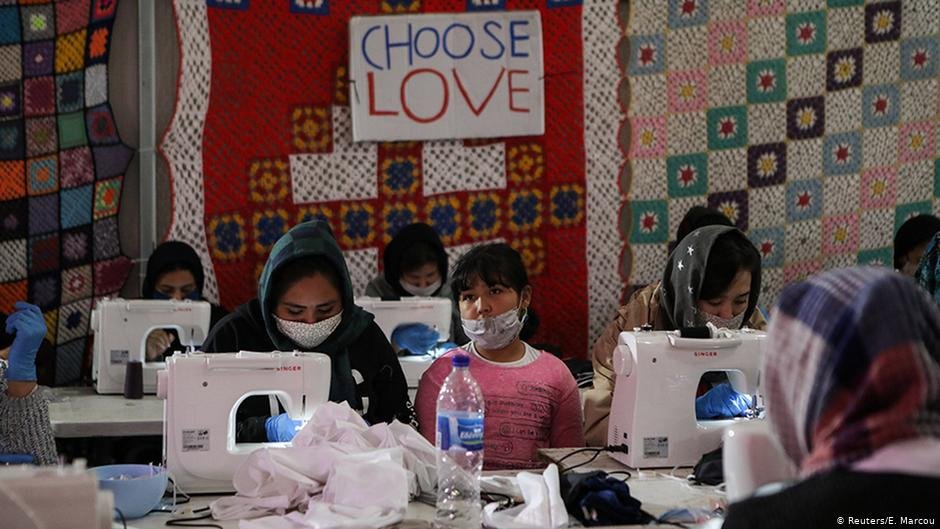 Point No. 5 on the list warns people in the camp to abide by hygiene rules. Apostolos Veizeis, of the group Doctors Without Borders, wonders how they are supposed to do that. "The camps are all way over capacity," he said. "The situation is ideal for the spread of COVID-19. Garbage hasn't been picked up for months. More than 1,300 people have to share one water spigot. And most don't even have access to water, electricity or toilets — instead they go to the bathroom outside."

Veizeis said the government's rules were hypocritical — put in place to reassure Greeks from the affected regions and discriminate against people stuck in the camps, leaving asylum applicants totally unprotected. He said older people and at-risk individuals would need to be evacuated from the camps immediately. There are only five intensive care beds on the whole island of Lesbos, he said, and just two on Samos. Greece's Health Ministry has dispatched just three doctors to care for the Moria camp's 20,000-plus inhabitants. That may seem bad enough, but the doctors also lack most medicine and equipment, too.

Greece's government has instrumentalized the pandemic, Veizeis said. "If they come out and say now is the time to be careful and the best thing would be to move refugees to closed shelters,' then they would just be trying once again to finally put that old idea into action," he added.

Previous attempts to move displaced people to closed shelters have been met with outrage by rights organizations, the European Union and even residents of the affected regions. Thus, it appears that, at a time when Turkey's government is hitting the brakes, Greece's has decided to forge on ahead. So far, no coronavirus cases have been diagnosed within the camps for displaced people. But Veizeis remains concerned. "If the virus breaks out in one of the refugee camps," he said, "it will be catastrophic."