Migrant restaurant in Lesbos presses pause due to COVID-19

Nan restaurant in the town of Mytilene on the Greek island of Lesbos used to serve Greek, Mediterranean and global food from lunch until late into the evening. Like all other restaurants, it has been forced to close because of the novel coronavirus. One of its founders spoke to InfoMigrants about the effect the closure has had on the organization.

"It's a very hostile situation here on Lesbos. In a way, coronavirus was a good break from that. It was appalling," says Lena on the phone to InfoMigrants. In pictures, Lena exudes energy. Her pixie haircut and laughing soulful eyes seem to reflect visually the depth of thought and compassion which comes across during our phone conversation. Lena is one of the co-founders of Nan restaurant. She also works closely with the organization Lesbos Solidarity.

Nan is a not-for-profit business, largely built on donations and goodwill in order to provide a bridge for migrants and refugees, who wound up on the Greek island of Lesbos, to be employed and find a way towards their own integration in Greece. Before the restaurant was forced to close due to the novel coronavirus in mid-March, it was employing 14 locals, a mix of migrants, refugees and asylum seekers. Through online reviews and Facebook posts, it looks like Nan restaurant was beloved by the people who chose to eat there.

"The food is cooked with love," say many posts, "delicious" enthuse others. The non-governmental organization Oxfam International profiled Lena in 2019 as "the face of kindness."

Videos of customers and staff dancing, clapping and eating look convivial and fun.

It all sounds and looks positive and in many ways it was. The small restaurant was often full, says Lena. Their efforts meant that they were able to offer a livelihood, a future and support to at least 14 asylum seekers in Lesbos; offering a way to work themselves out of the camps which rob them of everything, Lena thinks. 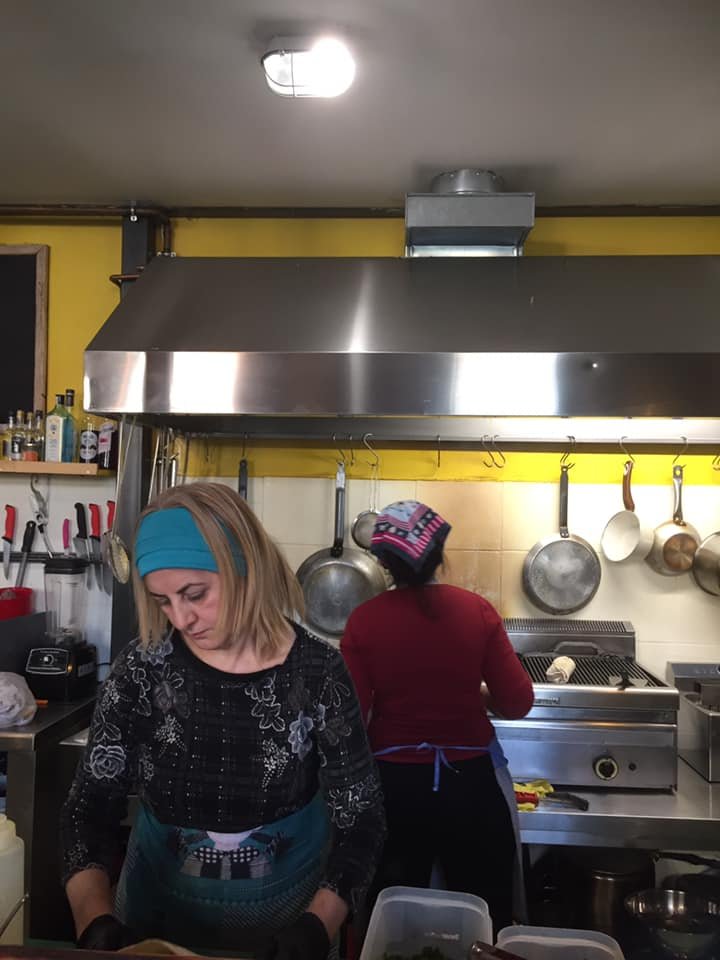 Nevertheless, on the phone, Lena sounds a little tired. She cycles between despair at the "desperate situation" on the island and in politics in general across Europe. "It is urgent that people change their policies," she says. To her, the COVID-19 pandemic has also ironically "pressed pause" for all the hatred that was swirling around the island. She hopes that after all this is over people might think again about what kind of world they want.

"You can't have cities or countries behind walls for ever," she says passionately. “One day those walls will shatter. Even if you are living in your happy bubble, whatever happiness means to you; you can't live for ever with despair all around you. People should stop denying what surrounds them and perhaps, the future might be easier than they think," Lena concludes hopefully.

'Working together to find solutions'

On Nan's Facebook site, they say they aim to "work together to find solutions to benefit both refugees and local people." 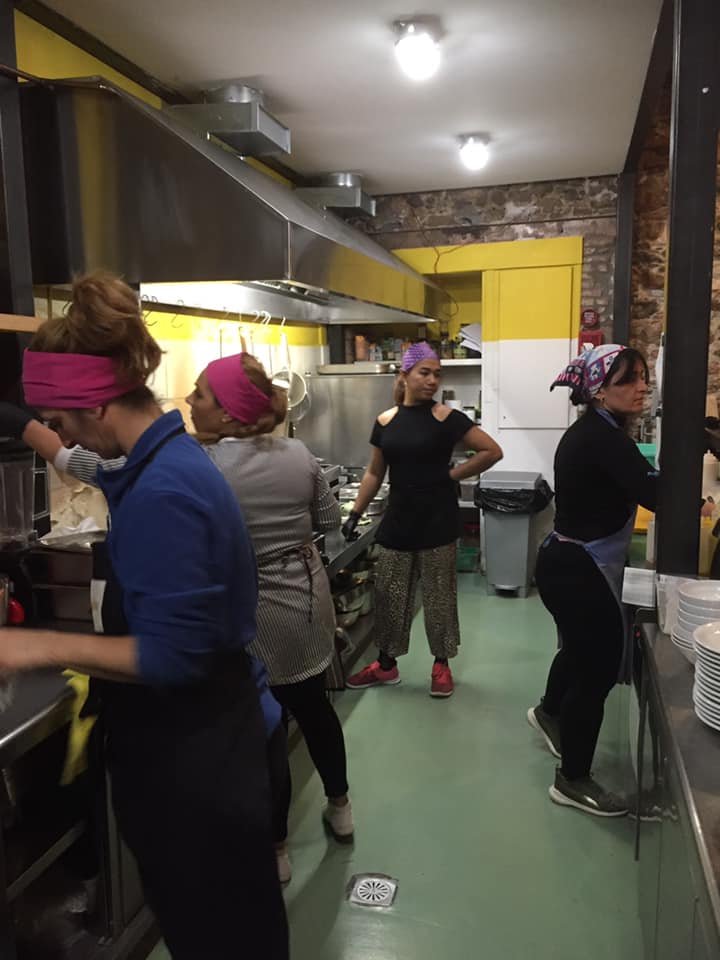 But their worthy aims have not been a match for the level of anger on the island as local residents have, in recent years, vocally demonstrated that "enough is enough." The residents want the migrant camps closed down and removed and for their island to go back the way it was before hundreds of thousands of people made their way via Turkey to Greece, in the hope of reaching the richer EU countries further north and west.

Lena testifies to the fact that she and other volunteers working with migrants and refugees on the island have been verbally attacked and faced high levels of hostility. So much so, she is even thinking of leaving the island. Originally from the north of Greece, Lena has been a resident of Lesbos for 21 years, and she’s been visiting the island since the 1980s.

When she is not running the restaurant, and animating the evenings, she is a school teacher, teaching English. She even says she can understand local people’s anger to some extent. The situation on Lesbos and a few other Greek islands really has become untenable, she thinks.

Like many Greeks, she feels Europe needs to offer more solutions and not just leave Greece alone to cope with the numbers arriving from Turkey. The values of solidarity that the European Union supposedly espouses are ringing hollow to people like Lena at the moment. "It's imperative people turn to activism," Lena thinks. "There will be no safe zone if we continue like this." 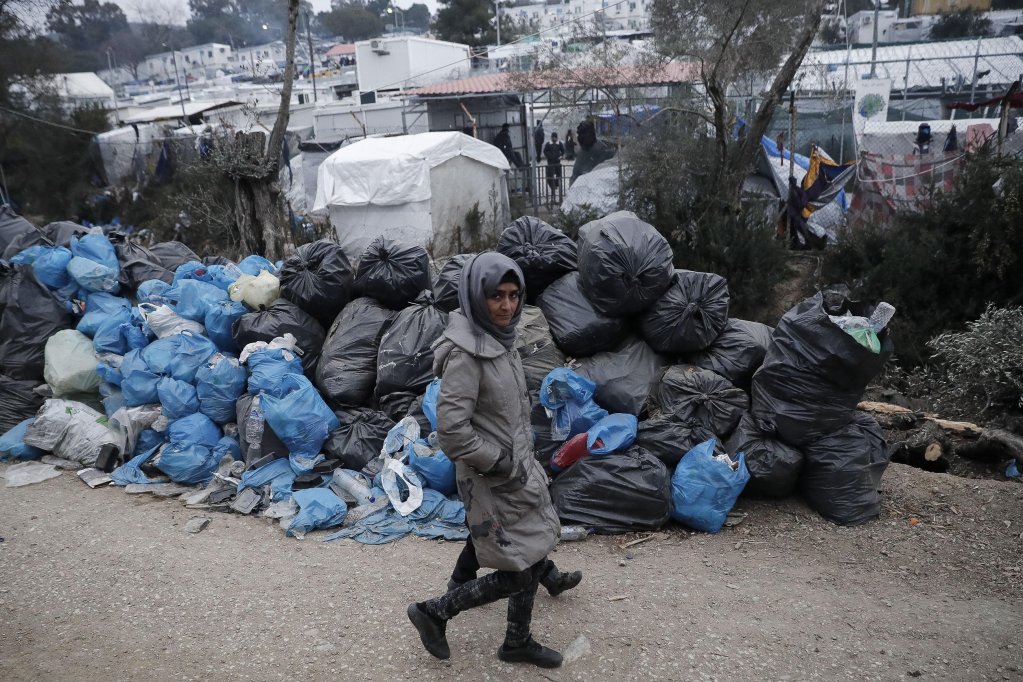 As well as cooking food in the restaurant, Nan donates any food it doesn't sell in food parcels and drop-off points for vulnerable migrants and asylum seekers in camps like Pikpa. Since the restaurant was shut, the migrants and refugees working for Nan are being provided by the government with a lump sum of €800 which is meant to cover them from mid-March to the end of April. But Lena doesn't know how long this will last, or whether more money will follow if the lockdown continues.

"The situation was difficult even before because we had a lot of hostility," Lena explains. "A lot of organizations and volunteers who left because of the riots and because of the attacks on people in solidarity. So it was a very black period for the island, and a very difficult one, since all the politics are turning right, or ultra-right. There is hate-speech and a discourse which says that refugees are the problem and they should be targetted for all the problems that the island is undergoing."

"Looking across Europe at the political leadership, I feel very discouraged. It seems that people are choosing to give the wrong answers to every kind of question and issue which we pose," says Lena with a sigh. 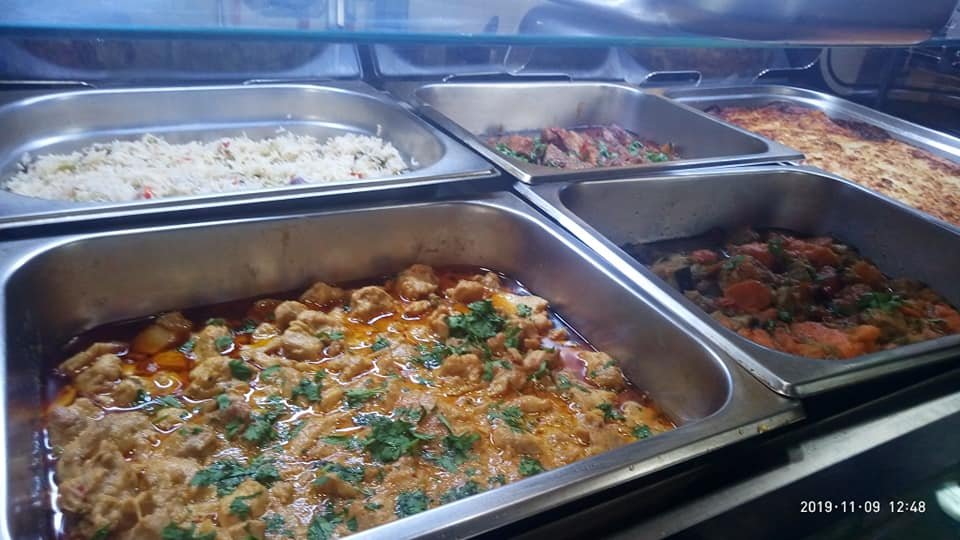 "Food is a good way to communicate, even for people who don't speak the same language. With the excuse of food sharing, even stories are shared, and thoughts about the situation," says Lena about the reasons she and another three women set up Nan. Both her parents were refugees from a war between Turkey and Greece in 1922. Her parents were part of the Greek community living in what is today's Turkey.

Her project is about giving migrants and refugees some form of control over their lives and secondly, to train migrants and facilitate local Greeks and refugees to work together in the restaurant. The ultimate aim was for the migrants and refugees to take over the running of the organization too. Unfortunately, admits Lena, that hasn’t really happened. The ones who might be capable of that often have other dreams, like studying, and move on. Others who can't see any other future other than staying on Lesbos are not always capable of taking on the organization, Lena says. "They often barely speak the language, you have to deal with bureaucracy and many many problems and that is often not possible."

The training has come at an "immense cost" for Nan, both in time and money. "It's not easy and so I understand when people are reluctant to participate in projects like this because it is really demanding on every level. We can't live like this any more; everyday watching this misery and yet being more or less helpless. I know people who have emptied their houses of clothing and food and blankets but there is a limit to that. You can't save 22,000 people and provide them with solutions when society has no solution for itself,"Lena admits sadly. 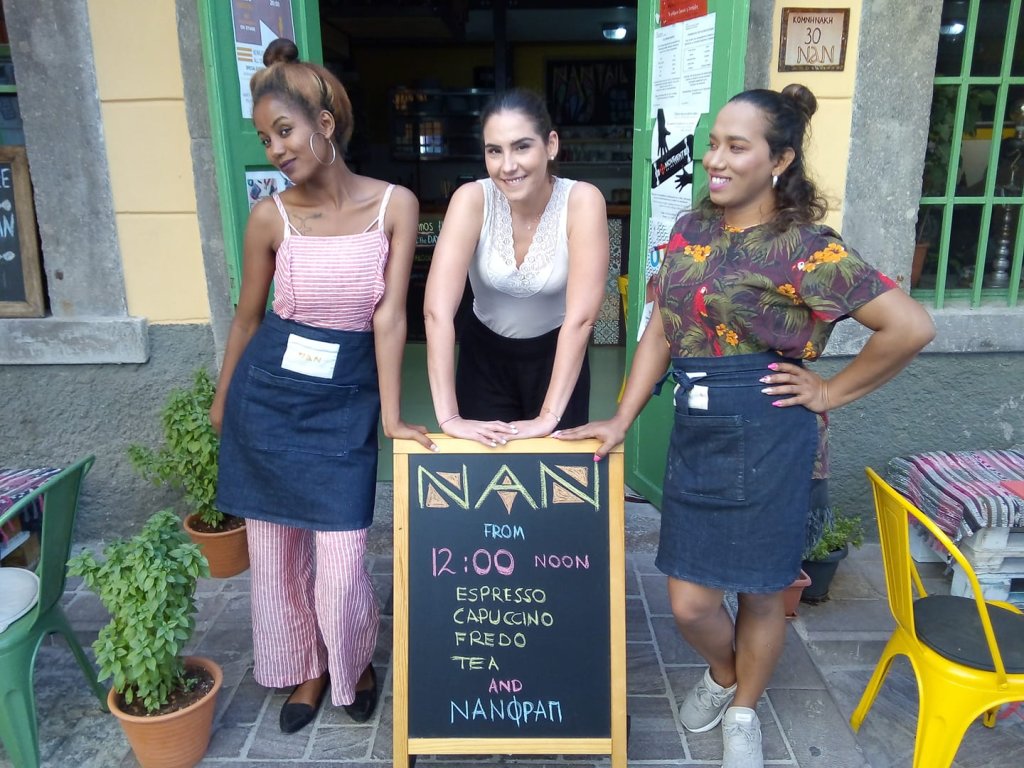 When people move on it can be difficult for such a small organization. Lena and the other managers, Evgenia, Efi and Ian all have their own jobs and they have essentially taken on the debt personally. Shutting down permanently is also "not an option," thinks Lena.

She is hopeful that they can get on to some kind of government program which would help them build up again once the restrictions, due to the novel coronavirus, are lifted. But the future is still uncertain.

"I have no answer [for the future …] If we don't reopen, they can come and confiscate whatever we have, and we have nothing. I don’t know what will happen, there is only one option. We have to reopen and see what happens. We will have to cut down the personnel. It is impossible financially to support 14 people or more."

'We must change so many things'

Despite all her worries, Lena signs off with the warm words "a big hug and thank you for caring." You get the impression that whatever happens, Nan will soon be opening its doors once again and will continue to bring cheer to the community it serves, in spite of the anger that may have quietened down, but has not gone away on Lesbos. 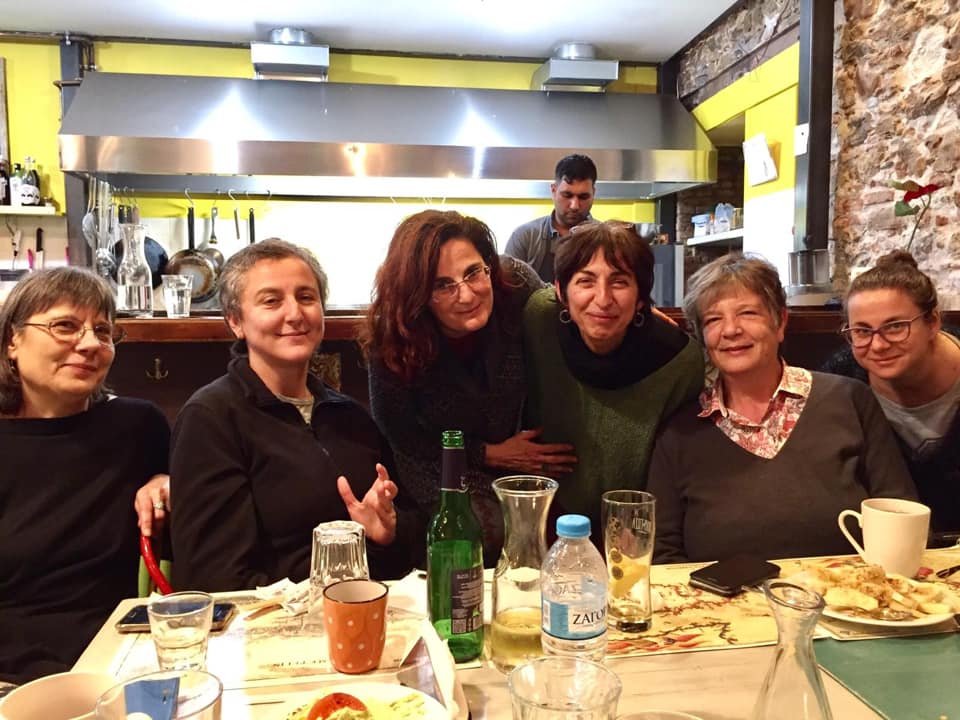 "I think when we do get out of this," Lena muses, "we must change so many things, first of all ourselves. There are revolutions which can happen without bloodshed. We must stop consuming lies and try to find the real meaning of living in peace with everyone. I hope that this quarantine will help people appreciate the simple joys of being alive. […] perhaps, [she laughs] people will stop being 'homo consumis' [consumer man] and turn back into 'homo sapiens' [wise man]. For the sake of the future and our children, most adults should shut up and sit and think a bit about what is important."