A fire destroyed parts of one of Greece's largest migrant camps on the Aegean island of Chios. On Saturday a blaze tore through Vial camp destroying some accommodation and administrative facilities and leaving a few hundred homeless.

Three migrants have been arrested, after a fire raged through Vial camp, on Chios, on Saturday night, April 18. The fire and unrest itself, according to Greek news agency ANA-MPA were triggered by a rumour that one of the camp’s residents had died from COVID-19. Two Afghans and an Iraqi man were taken into police custody following the unrest, police sources in Athens told the news agency AFP.


Many camp residents have "likely been left homeless," the UN refugee agency’s spokesperson Boris Cheshirkov told the news agency AFP. On Sunday, Cheshirkov told AFP that the damage was "still being evaluated." He acknowledged though that "many shelters had been burned down" and that the UN had "donated tents to the authorities which can quickly be put into use." He also said UNHCR would "assist in replacing the warehouse tents."

One of InfoMigrants' Facebook users, who wished to remain anonymous, says he has been staying in Vial camp for several months. He has told us previously that he is worried about the situation at the camp, which he says is overcrowded. At the beginning of April he asked to be taken out of the camp because he felt that it wasn't safe and was worried about contracting the novel coronavirus.

It is reported that events kicked off on Saturday night after rumours that an Iraqi woman who had been resident in the camp died. The woman had been taken to hospital with a fever earlier this week, but by accounts in ANA-MPA, she had tested negative for the coronavirus.

Order restored at 1am

Chios police sources told AFP that order was only restored in the camp at around 1am and that "many people" took part in the unrest.

InfoMigrants' Facebook user said people inside the camp were "angry" after the reports of the treatment of the Iraqi woman. He said they had heard that the police had refused to treat her properly and had not offered her oxygen so that when she died, the unrest just bubbled over.

He said that a mini food market was also burned and at least two cars. Police sources told AFP that three cars had been "gutted."

The Facebook user said that residents inside the camp feel they are being treated differently from the rest of the Greek population, especially when it comes to medical treatment.

'We are very scared'

He said that he was scared because he was an asylum seeker.

Another woman, Anissa, from Somalia, told AFP that she was also concerned for her safety. She reported that the fire had "burned two big tents and each tent has more than 20 homes inside." 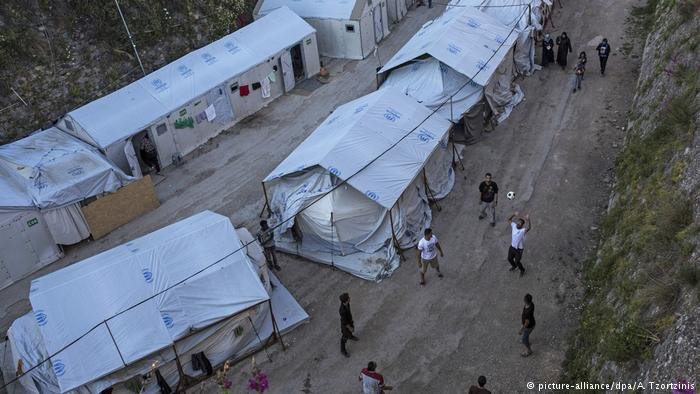 An Afghan mother of two from Afghanistan also reported that a group of camp residents "attacked the food warehouses, set fire to the info point, took the food refrigerators into the camp and set them on fire."

She told AFP that she was "very scared" and that she "couldn’t sleep at night." Both women also testified to the police firing tear gas in order to break up the protestors.

Like many other camps, Vial camp has also been under quarantine in recent weeks as the Greek authorities seek to try and limit the spread of the coronavirus among both the Greek and migrant populations. So far there have been 110 deaths from COVID-19 in Greece.

According to UNHCR data there are still around 39,200 migrants resident on the Greek islands. The authorities have slowly been transferring the most vulnerable to other facilities on the Greek mainland. A small contingent of unaccompanied children were transferred to Luxembourg and Germany last week. These transfers have been criticized by some aid agencies as being inadequate when faced with the several thousand unaccompanied children who are still on the islands and in various facilities, many in appalling conditions.

InfoMigrants' user said that on Monday things were calmer in the camp. However, he claimed he had not seen any evidence of replacement tents or rebuilding and that around 270 were homeless with nowhere to sleep as a result of the fire. He said that made things difficult because temperatures are still relatively low in the day and at night it was "far too cold" to be able to sleep outside with no shelter.

Pictures of the aftermath of the fire can be seen on the Chios news website PolitisChios.gr https://www.politischios.gr/koinonia/sokaroun-oi-eikones-apo-ten-kamene-bi-al