German florist campaigns to prevent her refugee apprentice from being uprooted

A German florist in the small town of Furth, lower Bavaria, is campaigning to try and stop a Syrian girl, who hopes to become a full-time apprentice in the shop, being sent with her family back to Spain where they have protection status.

"Many of you know our Syrian intern girl Mayaz," starts a Facebook post by the owner of a flower shop in the small Bavarian town of Furth. Manuela (Manu) Grüßie is the owner of the Blumenbinderei and when she heard that over Easter the German authorities had asked the family of one of her favorite interns, Mayaz, to move out of their home in Furth and into a remote accommodation 25 kilometers away, she decided to act.

"It is awful...and all very strange" says Manu over the phone to InfoMigrants. "When they lost their home, I decided to step up the campaign," says Manu. Her voice full of compassion. "These two agents arrived at the family home, almost like the Gestapo [Nazi secret police]," says Manu. "They didn’t explain, […] they had nothing in writing [...] the family didn’t know what was going on, [...] it is just unimaginable that anyone could do that. And I could do nothing as it was all over Easter with everything closed," says Manu. 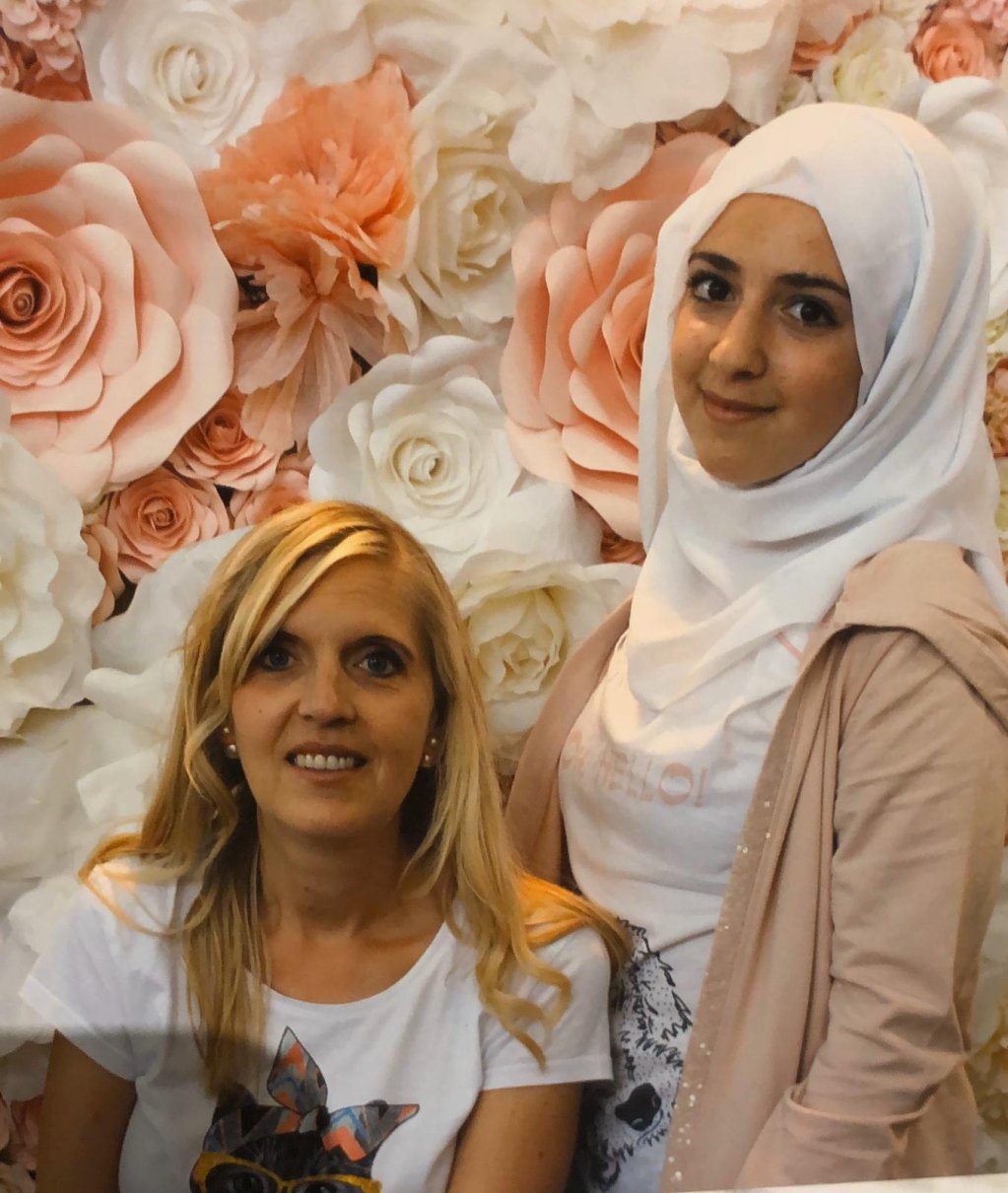 The authorities said that they needed Manu's family's accommodation in order to isolate asylum seekers infected with coronavirus, but Manu is still outraged. "The children are really upset by all this," says Manu. "I just don’t understand it."

'She is so creative'

When Manu first met Mayaz last summer, something clicked professionally. "With floristry, you either have it or you don’t," says Manu, "it’s a bit like singing," and Mayaz definitely has a talent. "She is so creative," says Manu. After her two-week internship had finished, Mayaz started turning up at the shop, asking to help out. And so, the beginnings of what has become a friendship blossomed. "She's part of the furniture now," laughs Manu. "One of her teachers told me that after the internship, Mayaz was different in a positive way -- she was surer of herself and seemed more confident," explains Manu.

Mayaz herself, explains on a call to InfoMigrants, in a mixture of German and Arabic, that she loves helping out at the Blumenbinderei and that she has learned so much from Manu and her work in the shop. "I talk to her and learn so much," enthuses Mayaz. 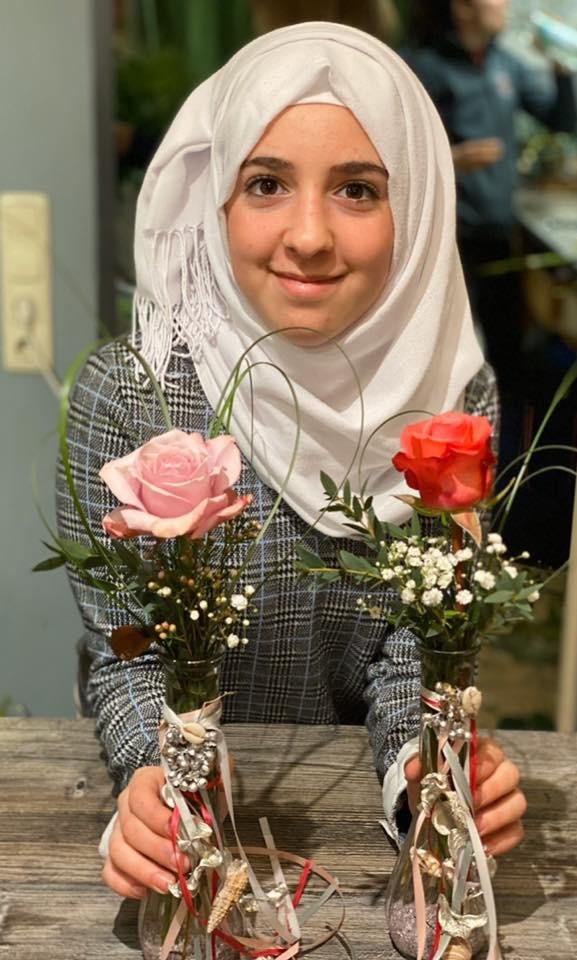 A long journey to Germany

Mayaz, her three sisters and one brother left Syria with their father in 2011. They were scared, Manu was told, because Mayaz’s mother had been kidnapped by the regime as part of a tactic to threaten families.

Eventually, the whole family arrived in Lebanon and stayed there for four years. "But things there were hard," says Mayaz who speaks quietly, and says the family, like many other Syrians, faced prejudice in neighboring Lebanon. Not surprisingly perhaps since she was a relatively small child at the time, she can't remember all the details of their journey. Even today, she is not quite 16 years old.

About four years after arriving in Lebanon, the family were offered safe passage by the United Nations to Spain on a resettlement program. Mayaz's impressions of Spain were not particularly positive though. She recalls how "difficult" it was finding a school which would allow her to wear her headscarf. In the end, she had to walk 30 minutes away and was launched straight into the Spanish curriculum without any possibility of language lessons.

Mayaz says the family knew no one in Spain and struggled to adapt. So they made their way to Germany where they had contacts. At first, things weren’t much better there. With a downward cast to her voice, Mayaz lists the different places they lived in Germany, transferred from one refugee home and hostel to another. From Karlsruhe when they first arrived, and eventually to Nuremburg in Bavaria.

But once they arrived in the small village of Furth in lower Bavaria, things for the family improved. Mayaz and some of her siblings went to the local school and last summer, Mayaz arrived in Manu's shop for a period of work experience. 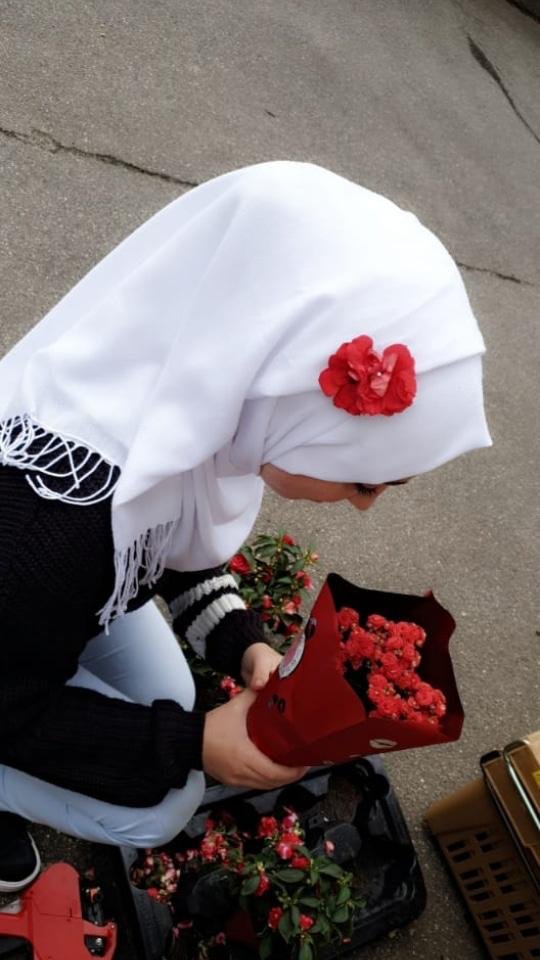 "It was the first time that I had met a refugee directly," admits Manu whilst explaining that she was always in favor of welcoming them. "I come from a family with a strong tradition against things like Nazism on both sides," she says proudly. "For me it is not even a question, it is just a fact," she says decisively, "I was just raised that way."

Once Manu had recognized Mayaz's talent in floristry, she was keen to encourage the girl in every way she could. As Mayaz's presence at the shop became more frequent, they started to talk about formalizing things into an apprenticeship.

"It is hard to find apprentices these days," explains Manu. "People are not interested in learning floristry anymore."

Manu only realized there might be a problem when her inquiry about the training place was met with the knowledge that Mayaz didn't have the right to start an apprenticeship in Germany; since, under the terms of the Dublin agreement she and her family are due to be sent back to Spain where they have subsidiary protection status. "Once I got that answer, I started to read up on the whole thing," says Manu.

"I just can't understand why they wouldn't offer this family a chance. They have every possibility of building a new life here. […] It is a total mess," says Manu, who feels the Dublin regulation is completely unfair. "Why send a family back who have the means to support themselves, have been offered apprenticeships and several jobs, back to a country where they were unhappy and where they would have to start again from scratch? Here they have a future!" As well as Mayaz's apprenticeship, Manu has found the father and brother-in-law job contracts. At the moment though, they too are denied the right to work.

'Something needs to be changed'

"Something needs to be changed urgently," says Manu. "They weren't even able to start language courses here," she says, "all because of the Dublin ruling." 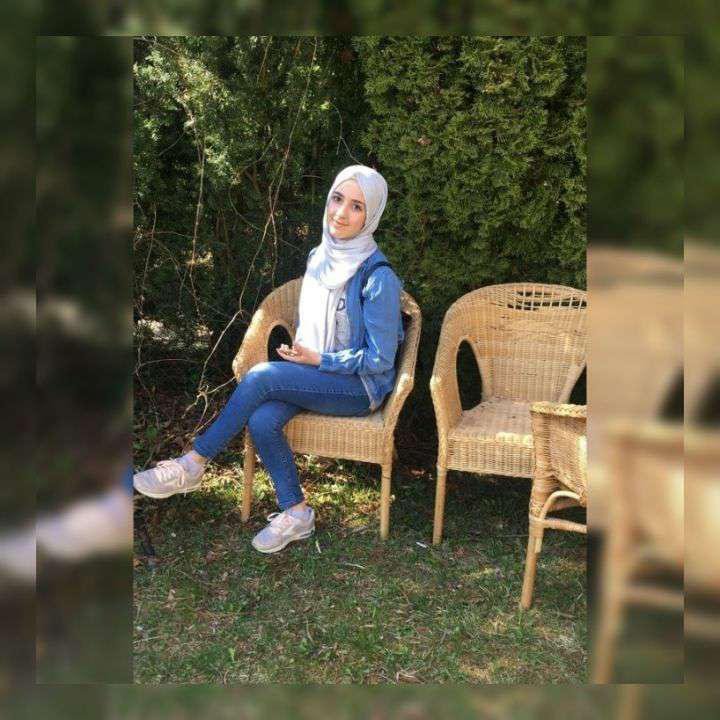 Manu has paid for a lawyer out of her own pocket to move the campaign forward. As the campaign gathered pace, she found out that Mayaz's niece has a scoliosis of the spine and needs surgery. She has even found a doctor willing to do that in Germany, giving the family another reason to stay.

Mayaz's parents still don’t speak much German at the moment, explains Manu with regret. "But they are a hard working family and they have even offered to work for free, they just want to do something." Manu says Mayaz's mother was a tailor back in Syria and her father a carpenter. Manu explains the language problem is partly because the family was denied access to German courses on arrival on the grounds that they had already acquired resettlement in Spain.

When asked what her future looks like, Mayaz is lost for words. On more concrete subjects though, she says she is sad to have been taken out of her school and away from the life she knew in Furth. She says being sent back to Spain would be "horrible" for the whole family and that she hopes to stay in Furth and take up her apprenticeship in the autumn.

Manu hopes that too, and is doing as much as she can to get Mayaz's story heard. "My only hope is that through getting this out in the open, the authorities will change their mind," Manu says fervently. She says she was surprised by the overwhelmingly negative response that she has so far received from most of the German officials she has approached. 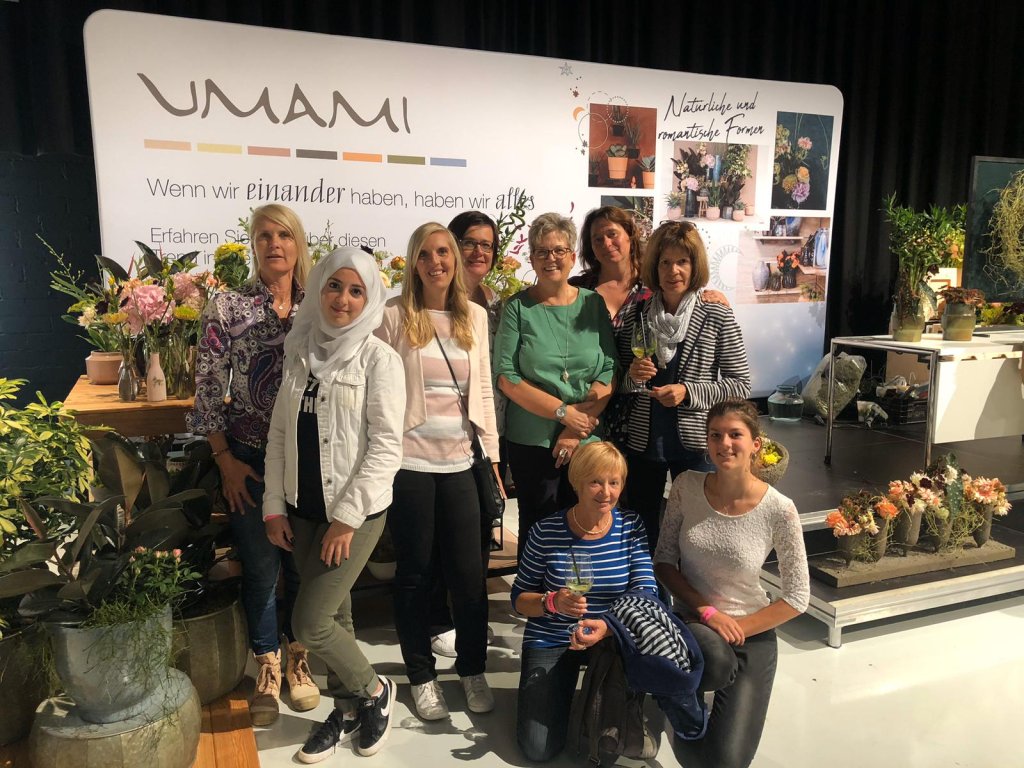 Most of the town, however, is totally behind her initiative, Manu says. When the family were first threatened with being sent back to Spain, Manu received so many offers of help on their behalf. Gifts for the children, clothes, food all flooded in. "People keep asking me what the family need and what they can do to help," says Manu.

The scent of jasmine

For now, Mayaz and her family are in accommodation about 30 kilometers from the place they knew. Mayaz wants to return to the flower shop, but doesn’t seem to quite know how. Working with flowers is definitely what she sees in her future, if she were to be able to stay in Germany.

On the subject of flowers, her confidence returns. When asked what her favorite flower is, she answers decisively, Jasmine. "Because it reminds me of happy times in Syria with my grandmother," she says shyly with a smile in her voice.

"We had just one Syrian family in the village," says Manu. "I just don't understand why a rich country like Germany can't give them a chance when they have support here. The whole system stinks from top to bottom."

So far, Manu's petition has more than 50,000 signatures, the required amount to get the authorities to take notice. Meanwhile, Manu is trying to mobilize as much of the press as she can, TV, every possible newspaper, all with the hope that the media storm will put "pressure" on the authorities to look again at the family's and Mayaz's future. 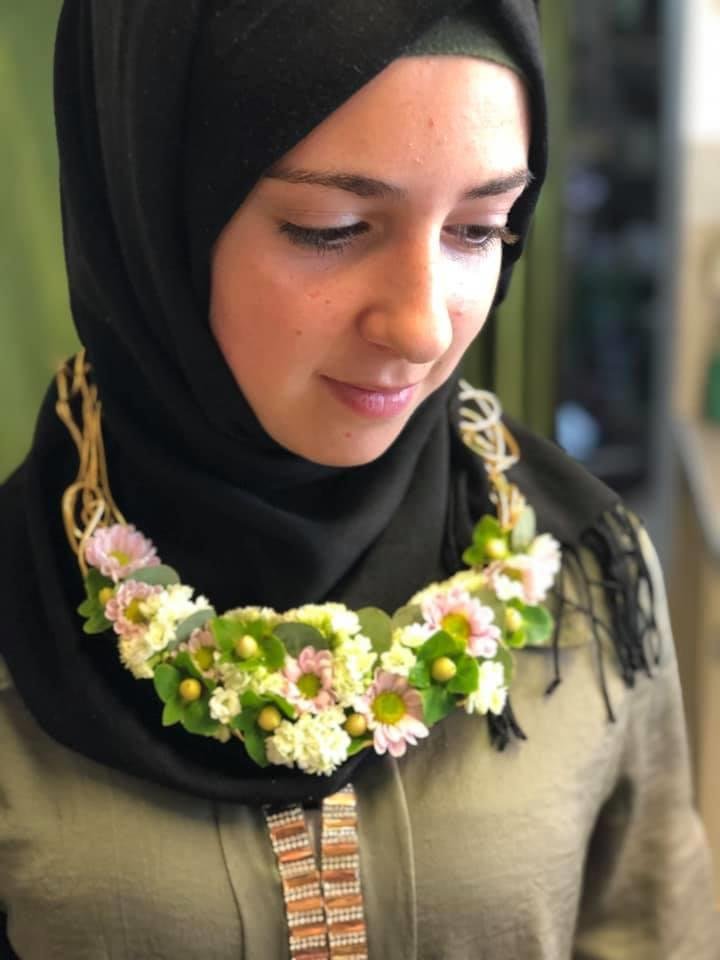