In southern Spain, migrant workers have long been relied upon to pick crops. But under the current COVID-19 lockdown, many have found themselves jobless and reliant on food from charity groups.

In shanty towns in Almeria in southern Spain, the doctors' charity "Medicos del Mundo" is providing health checks and food to migrants left without work during the coronavirus outbreak.

As part of strict lockdown measures, Spain has put restrictions on how many people can travel in one car, which means many migrants cannot get to the fields to pick produce.

Usually, foremen pick up workers from the towns to take to the fields, but now drivers risk being fined if they are caught with more than the limit.

"There's no room to take everyone, the boss would rather take just one or two," said Adama, a migrant from Mali who came to Spain by boat 12 years ago. "We've been a long time without work – nearly two months. We're staying at home with no work, nothing," he added, standing in his makeshift house. Spain's recent economic growth spurt has led to increased labor migration. The agricultural sector in the south has long relied on migrant workers to pick produce.

In Nijar municipality in Almeria, the migrants are mostly from Morocco and sub-Saharan Africa.

In recent days, health workers have been taking their temperatures to check for COVID-19 infection. The medics, sometimes using the native French of some migrants, ask them to stand two meters apart in the queue. Other aid workers, wearing face shields and gloves, distribute oil and milk.

"Medicos del Mundo does not usually hand out food," says Vladimir Morante, the charity coordinator for Andalusia. "But given the situation we have no choice." 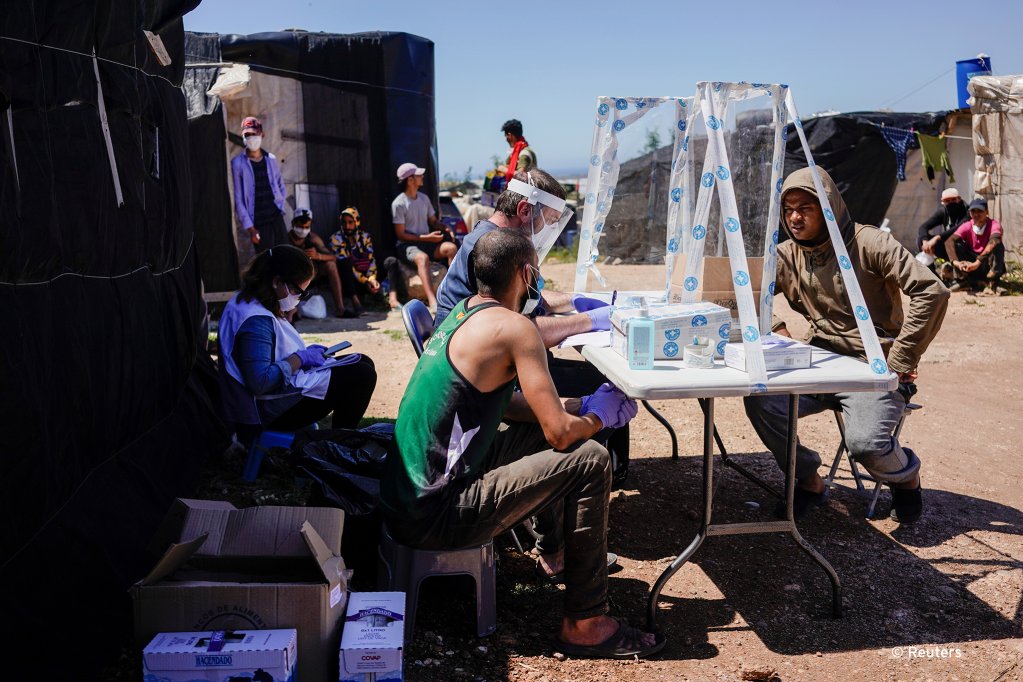 In the nearby settlements, dwellings made of wooden frames wrapped with tarpaulins are home to 6,000 migrants. Medicos del Mundo has stepped up its work during the lockdown, distributing nearly 3.5 tonnes of food in the last two days. They are also handing out masks and bleach.

Tables with Perspex shields have been set up so that health workers can see ask migrants questions about their health as well as telling them about protective measures like physical distancing.

However, living in such crowded conditions with so many people to a dwelling makes it hard, Morante admits. "Being able to apply those measures is practically impossible," he says. "They live totally packed, it's impossible to maintain a safe distance."
Based on a story by Juan Medina, Reuters