In lockdown: Migrants in France up against pandemic, police abuse

For many migrants still camped out in Calais and Dunkirk, the coronavirus pandemic has exacerbated an already dire situation. Supermarkets are reportedly turning them away and the police are removing their tents.

The first sun rays catch the patches of green grass, dotted with half a dozen tents. Apart from birds' chirping and the occasional car driving past, it's peacefully quiet.

But the serenity is suddenly interrupted by the arrival of half a dozen police vans. Groups of police, equipped with face masks and some of them with riot gear, move towards the tents. They are about to do what they've been doing every two days since August 2018: They wake up the migrants and ask them to move their tents by a few meters — only for the migrants to move the tents back to where they were once the police have left.

Even in times of COVID-19, there's no let-up in police procedure. Aid organizations say at least 70 such evacuations have taken place at the various small migrant camps in Calais since the beginning of the lockdown. That makes migrants feel targeted, says Mengis, a 28-year-old migrant from Eritrea in north-east Africa. Just like all the other migrants we talked to that day, he didn't want his photo taken.

"The police don't see us as human beings. They don't respect us. If you don't wake up when they come, they take away your tent. Then, we have to ask aid workers for a new one and wait for up to a week," he said.

Migrants fear for their lives

Some migrants even say the police are threatening their lives. Five of Mengis' compatriots have written an open letter and are pressing charges against a riot police brigade alleging the latter repeatedly beat them, sprayed them with tear gas and called them names like "monkey" and "bitch." The Inspectorate General of the National Police is now investigating the matter. 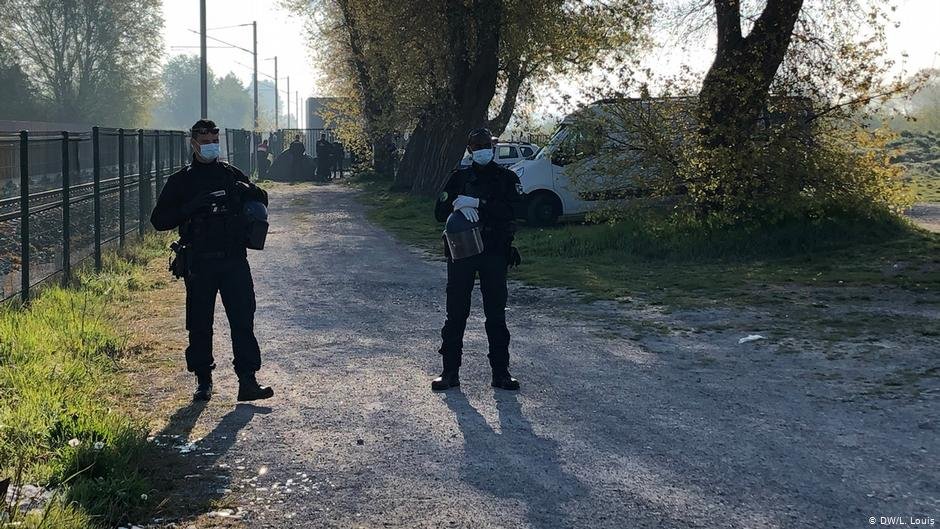 The lockdown also means the migrants are limited in their movements. They are no longer allowed to go downtown. Several migrants told us that security personnel at a nearby supermarket, the Carrefour Calais Mivoix is no longer letting them in. The supermarket declined our request for an interview but said that no discrimination was taking place at the store. And the migrants say local buses, which used to pick them up at the camps, no longer stop for them.

Deputy Mayor Philippe Mignonet, who is in charge of the public entity running the buses, says they are no longer stopping for large groups of migrants, but still letting individual migrants on, for example when these have to go to hospital. "We had to change our policy after there were three confirmed cases of COVID-19 at the camps, as others were refusing to get on," he explained.

'A step backwards for the migrants' human rights'

It's difficult to know if those were the only cases of COVID-19 there. Aid workers report that some of the migrants are showing symptoms, but no tests are available. Social distancing is impossible. The camps are littered with waste. There are no masks or hand sanitizer.

Noël, a 20-year old who arrived in Calais in December, says he feels like an outcast. "We are completely unprotected, left to ourselves. Since the beginning of the pandemic, we've been stuck in these camps. Some of us were taken to shelters, but we had to stay in the room with up to four people — that's illegal. So many came back, even though they had to walk for two days," he said.

What's more, aid workers had to reduce their staff at the camp by half because of the lockdown — vulnerable volunteers were sent home. Those who stayed, still deliver wood for cooking or food in groups of two. Yann Manzi, co-founder of the aid association Utopia 56, says the situation has led to a step backwards for the migrants' human rights.

"We are only providing the bare minimum — there's no legal aid for them any more. The evacuations continue and migrants keep getting harassed by the police. You'd have thought we would all stand together in this crisis. But these vulnerable people are being left behind," he said.

But Calais's deputy prefect, Michel Tournaire, says that medical teams are regularly checking on the migrants and that the government has provided some lavatories.

"Plus, we are offering shelter for up to 715 migrants. They can get medical care there. 353 people have already taken up that option."

He adds that, COVID-19 or not, the evacuations are necessary. "The migrants are being evacuated every two days, if they are camping illegally. We need to prevent them from settling. I can't comment on whether this is right or not — it's been decided by our judicial authorities."

But aid workers say that the shelters' capacity isn't enough. They put the number of migrants in Calais at 1,200 — twice the government's estimate. In Grande-Synthe, a suburb of Dunkirk located about 40 kilometers (25 miles) east of Calais, at least another 600 migrants are camping out, says Akim Toualbia, founder and president of the aid association Solidarity Border.

"There are only six toilets here and not even soap for them to wash their hands. I really thought the government would do more," he said.

But many of the migrants don't trust the government to help them anyway. They'd rather stay at the camps and try to cross, like Mengis.

"I'll never give up. One day, I'll manage to get to England. My dream is to become a doctor, have real freedom, a nice house and a nice life", he said as his eyes lit up.

He wants to join two of his brothers who have already settled in England. But the coronavirus pandemic seems to have made reaching the other side of the Channel more difficult than ever.