The EU's foreign minister has urged Malta to stop blocking a new Mediterranean Sea naval mission aimed at preventing the flow of weapons into Libya. Josep Borrell said the operation was needed to stabilize Libya and stop the "wave" of migrants from Africa.

The mission was launched by the EU in April to enforce an international arms embargo against Libya. But Malta last week pulled out of the operation in protest at the EU's migration policy. The government withdrew previously pledged military assets and said it would veto any new funding for the operation, according to the news agency, dpa. 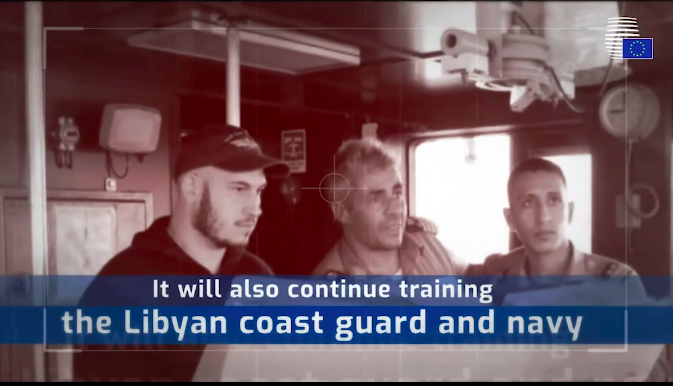 Irini's predecessor, Operation Sophia, had its vessels grounded due to a migration dispute among member states last year. According to the German military, Sophia rescued around 49,000 people from the sea in less than four years of operation.
Stability in Libya needed to stop migrants

Malta accuses other European countries of leaving it to bear the brunt of migrant arrivals from Northern Africa. At a video press conference following a European Council defense ministers’ meeting on Tuesday, Borrell said he understood Malta’s concerns.

“They are facing a strong push of migrants from Libya. I understand perfectly. And I am trying to mobilize our capacities (from the EU and member states) to be involved, to try to help Malta face this situation,” Borrell said.

But he said threatening Operation Irini was not the answer. “The Irini operation was conceived to stop the fighting in Libya and political stabilization is a precondition to stop the migrants' wave. So to stop the migration push, we need to politically stabilize Libya, and this depends on (Irini),” Borrell said.

Operation @EUNAVFOR_MED #IRINI is the EU’s contribution to achieving a ceasefire in #Libya by enforcing the UN arms embargo. We remain determined to see it fully respected.
Full press conference:https://t.co/lnpu2P2FuB pic.twitter.com/v4OiWfkulV

Borrell said the Maltese foreign minister, Evarist Bartolo, understood the argument, and he hoped that the issue would be resolved in the coming days. But Malta’s prime minister, Robert Abela, has said he will not budge on his position, according to the editor of MaltaToday.

The government in Valletta says Malta cannot take in any more asylum seekers and is refusing to rescue migrants from the Mediterranean or allow them to enter Maltese waters, instead chartering boats to hold migrants outside its territory so they cannot claim protection.

Maltese authorities are also under a judicial inquiry into allegations that they breached international law by pushing back a group of migrants to Libya.

According to dpa, some EU diplomats say that Malta is also worried that Operation Irini, in preventing Turkish weapons from reaching the UN-backed government of Fayez al-Serraj (GNA), will give the militia leader Khalifa Haftar a significant advantage.

But Borrell said that Operation Irini's task was to control arms flows to Libya by sea or by air and to uphold the UN embargo. It is "is not addressed against anyone specifically," he stressed.

Operation Irini ships are to be deployed off the eastern coast of Libya, where most weapons from Turkey arrive.