As part of a social program, French pensioner Antoine Boulanger in February opened up his home to Malian teenager Bakary. But after just a month of living together, France went into lockdown because of the coronavirus, and the two started to bond – in part thanks to their common interest in science.

French pensioner Antoine Boulanger and Malian teenager Bakary* sit side-by-side on the couch in the living room. They are both shy in nature, and although they exchange some quick looks and smiles, they seem to spend more time listening to each other than they do observing each other.**

"I'm very happy, Monsieur Antoine is really nice to me," Bakary, who claims he's 16 and is hoping for authorities to recognise him as a minor, smiles timidly from beneath his black beanie hat. He's wearing a black t-shirt and dark blue jeans that have been fashionably torn at the knees. "I don't have the words to describe how happy I am to be here." Boulanger, a 65-year-old pensioner with a white beard, is visibly moved by his words but lets Bakary finish before he starts speaking: "I’m happy you are here too," he says simply.

The two only got to know each other in February, when Boulanger went to pick up Bakary from his temporary housing in a hotel operated by Doctors Without Borders (MSF). Boulanger had signed up to be part of a social program – run by MSF and French aid group Utopia 56 – which connects migrants with local hosts. Since then, Boulanger's spacious apartment in the Parisian suburb of Noisy-le-Grand, is also Bakary's home.

"Bakary can stay here for as long as he wants, I think it's probably better for him to have somewhere stable. As for me, I don't have any constraints, and I have rooms available," the former IBM technical sales engineer explains. For Boulanger, who at first lived on his own after his children left home, this is not the first time he has accommodated people in need: For the past six years he has hosted young people who have been under legal protection. Since 2018, a 24-year-old homeless man whom he met in a park by his home also lives with him. "There are young people out there who don't have proper housing," he says. "And I got involved by offering them accommodation."

But Boulanger and Bakary's cohabitation started out in quite special circumstances: Just a few weeks after Bakary moved in, all French households were ordered into lockdown because of the coronavirus. Bakary, who comes from a small village in the Kayes region in western Mali, had been overjoyed when he had finally enrolled in seventh grade at the nearby high school on March 10. He hadn't attended school for three years, and his life was about to take a new turn. But just one week later, the coronavirus crisis prompted the French government to shut down the country's schools, meaning Bakary's new life as a high-school pupil in France came to an abrupt halt.

"I was sad, but I understand why the lockdown was needed," he says. For two months, he didn't leave the house once, and has only ventured out for a walk once since the government started to lift some of the lockdown restrictions on May 11. 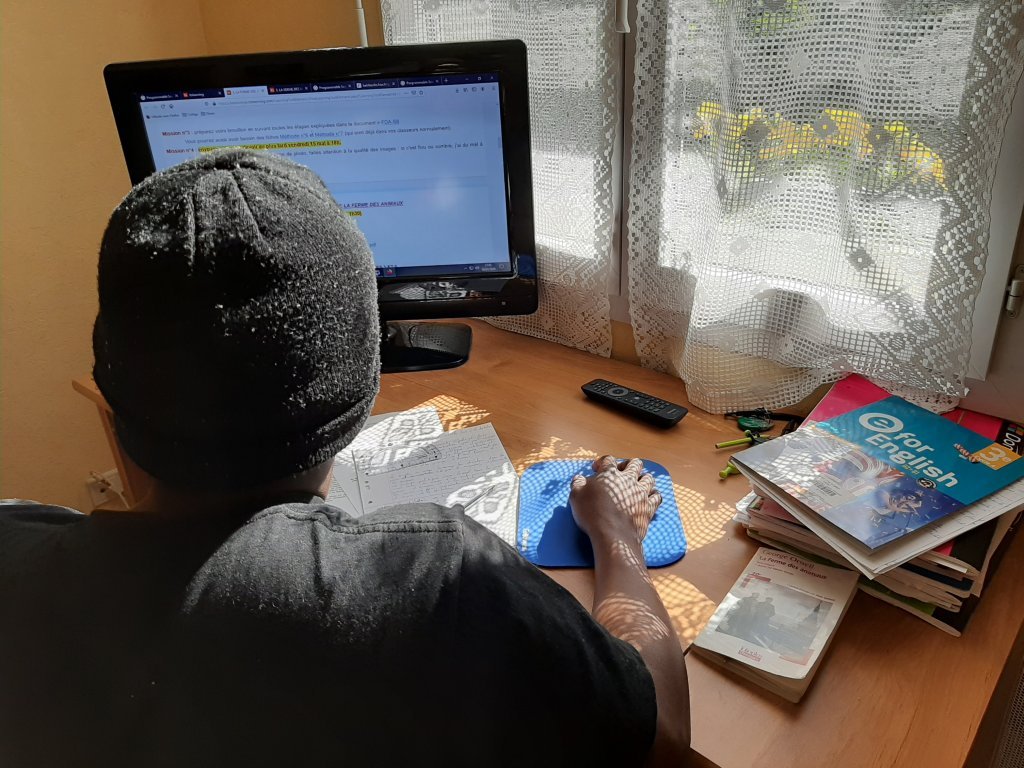 In a bid to keep up with the schoolwork, Bakary has been doing exercises that the teachers send over every day. "Monsieur Antoine helps me when I don't understand," he smiles. "Especially with maths, and physics and chemistry."

The two housemates seem to treat each other with the greatest respect. Bakary tries to stay as discrete as possible and spends a lot of time in his room. He is also careful not to disturb anyone when he gets up to eat in the middle of the night because of Ramadan.

Boulanger is equally respectful, and treads with care when he brings up the young migrant's past. "I know he crossed a part of Africa and that the boat he was on sank. People died around him," he says. "I’ve understood that he wants to talk about it, but I don't want to ask him too much about what he went through, for fear of bringing up painful memories."

But the tranquility in Bakary's new home, combined with the isolating lockdown restrictions, has made some of his most difficult memories come rushing back. He is seeing both a psychiatrist and a psychologist to deal with his trauma and says he is now starting to understand some of the things that happened to him a little bit better.

According to Bakary, his family first sent him to Bamako, telling him that "the access to education was better there." Once in the Malian capital, a friend of his father then organized for him to fly to Morocco, where he says he was "supposed to study for a few weeks."

"I ended up in caves in the forest in Morocco, I can't even really explain how that happened," he says, appearing to be searching for the right words to explain his experience. In the summer of 2019, he attempted to cross the Mediterranean, but the boat sank and he was rescued by the Spanish Red Cross and was brought to Spain. Bakary says he then decided to join a group of people who were going to France, because he could speak the language there. Once he arrived in Paris, he spent several weeks sleeping on the streets. "One night, my bag was stolen with my passport in it. I need to find it."

Identity documents proving his age are essential if Bakary wants to be recognised as a minor. If he obtains that status, child welfare services will be in charge of providing him with both accommodation and education until he turns 18. His demand has so far been rejected because he wasn't able to prove his age, and his answers during the interview weren't considered to be "clear enough." But Bakary plans to file for legal recourse. 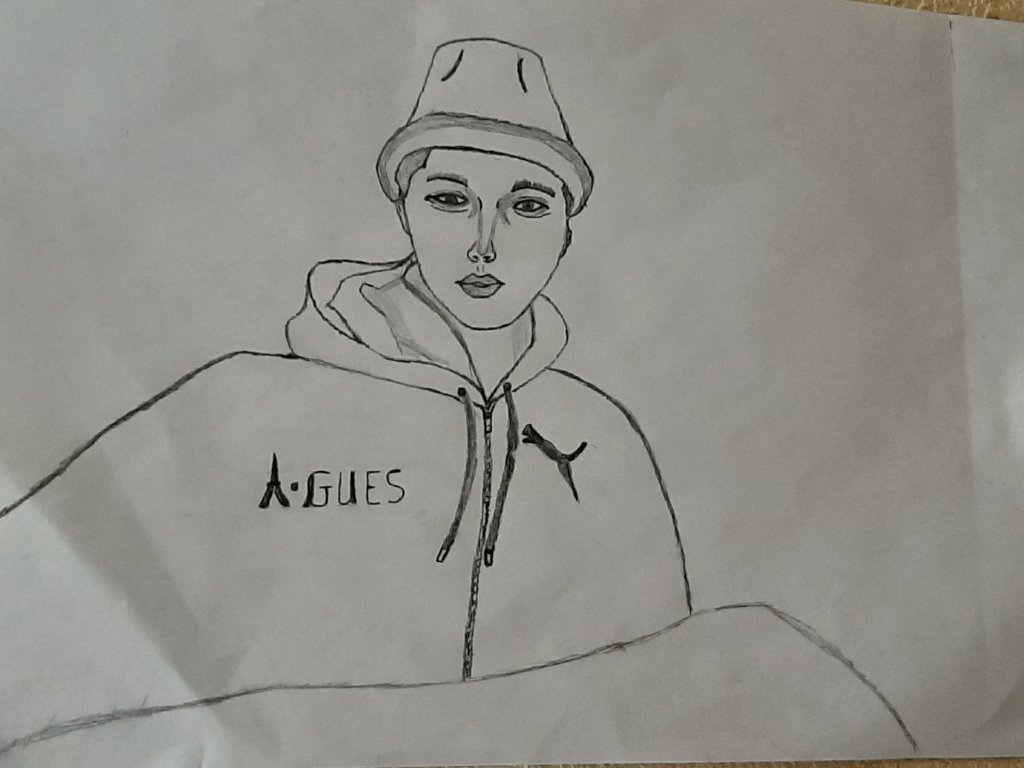 "I've never got anything easily. Since I was a child, my whole life has been complicated. Besides, I was lied to," he adds, implying that his relatives organized his departure without telling him because he never would have agreed to it. "I sometimes speak with my mother by phone, and she tells me that I have to be brave," he says, but admits that he sometimes feels overwhelmed by negative thoughts that could very well push him "over the edge."

But thanks to his new home, he says he now also feels optimistic for the first time in a long time, and is determined to accomplish "great things" in France - if possible - and alongside "Monsieur Antoine." "I realise how lucky I am to be living in his home, and that it allows me to learn more about French culture," he says. "I already regard Monsieur Antoine as family. I plan to do everything I can to make him proud," he says and looks down. "There is nothing that will make me more happy than seeing you succeed," Boulanger replies as his eyes well up with emotion.

*The first name has been changed to protect the person's identity.
**This article was originally written and published in May on InfoMigrants French site and has only later been translated for the English site.