Support structures for gay, lesbian, bisexual or transgender refugees often rely on in-person meetings. That’s one of the reasons why measures to prevent the spread of COVID-19 have hit queer refugees particularly hard. We spoke to LGBT+ refugee advocates in Germany about the situation, and where people can still get help.

Before the coronavirus crisis, Elceta Marsha Ennis would take the train to Frankfurt several times a month. She would attend queer meet-ups, like the monthly Café Nahal meetings for lesbian migrants and refugees, and spend time with her friends, most of whom are part of the queer activist community in Frankfurt. But for the past two months, the 38-year old refugee and lesbian activist from Jamaica has been stuck in Schwalmstadt – a small town two hours north of Frankfurt, where she shares a one-bedroom apartment with her teenage daughter and where, she says, “as far as I know, I am the only lesbian.” These weeks have felt extremely isolating for her.

Ennis is one of many queer refugees in Germany whose access to support structures has been cut off due to the coronavirus crisis. The mandated isolation to prevent the spread of the coronavirus can be triggering for queer refugees, Ennis explains: “We have fled countries where we couldn’t meet publicly, where we couldn’t live openly. For us, coming to Germany meant freedom, being able to meet and live openly. Now, with the pandemic, it’s like going back to that frame of mind that you were in in your home country – being isolated, not being able to socialize.”

Homosexuality criminalized in over 60 countries

In many countries around the world, people who belong to the LGBTQ community experience discrimination and persecution. In 11 countries, having sexual relations with a person of the same gender is punishable with the death penalty, according to 2019 data from the International Lesbian, Gay, Bisexual, Trans and Intersex Association (ILGA). In 57 countries, people can be sent to jail for consensual same-sex sexual acts, including in Ennis’ home country Jamaica.

People who face violence, imprisonment or other types of inhumane treatment in their home country because of their sexual orientation or gender identity have the right to asylum in Germany. 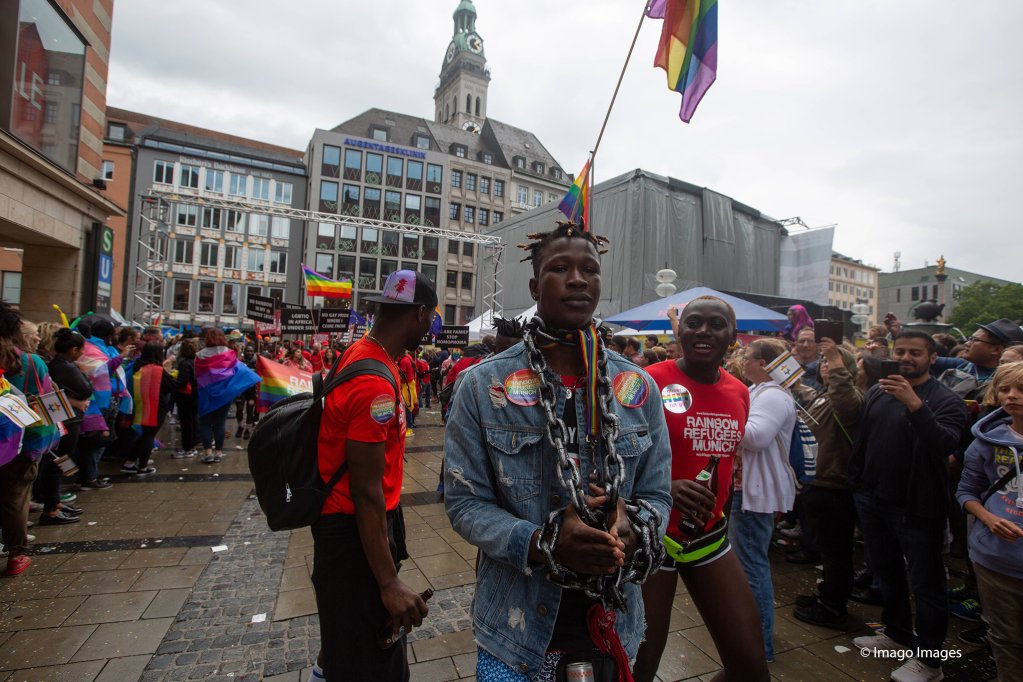 In order to get the right advice and support in Germany, many LGBTQ refugees rely on organizations specialized on queer issues. “In many cases queer refugees have had to face a lot of violence and discrimination, many are traumatized, so they have to be able to talk about these things in a safe space – they can’t talk about these things with a lot of people who come from the same cultural background, or even with strangers whom they cannot trust," says Lilith Raza, who came to Germany from Pakistan and now works for the Queer Refugees Deutschland project run by the Lesbian and Gay Federation in Germany (LSVD).

Now with the coronavirus crisis, many advocates are worried that queer refugees will have difficulties to find the right support organization and get in touch with them. “It was always a problem to find a suitable organization only specialized for queer refugees’ issues where you can talk about your problems, that has an interpreter for the language that you speak, who is sensitized to LGBTIQ issues,” Raza told InfoMigrants. “We now face the same problems that were there before corona, but the virus has made things even more complicated.” 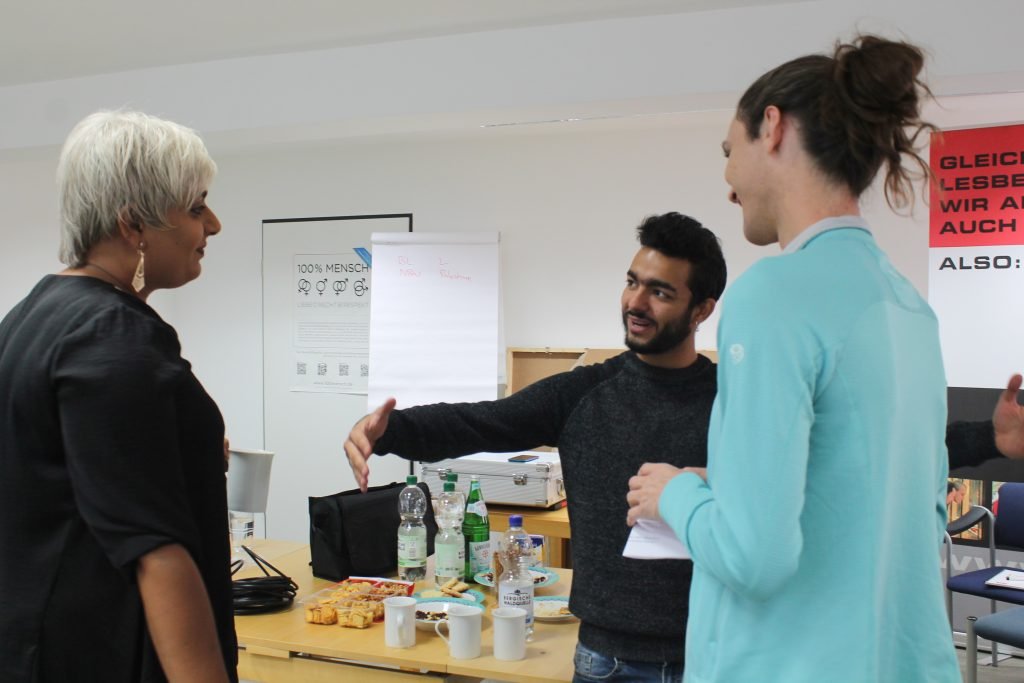 Across Germany, local organizations that offer support to queer refugees have been trying their best to continue their services. When the German government issued a “contact ban” in late March, Rainbow Refugees in Frankfurt shifted almost all of its counseling online, using tools such as the video conferencing platform Skype, WhatsApp or Facebook messenger, project coordinator Knud Wechterstein told us. Now that the government has eased some of the restrictions, Rainbow Refugees is starting to conduct in-person meetings again, one on one, in their offices, with some precautionary measures: Masks must be worn, the Rainbow staffer and the refugee or migrant have to sit far apart, and the window is kept open at all time for air circulation.

Amit Marcus, who assists gay and bisexual men who fled their home countries for the Aidshilfe in Duesseldorf, also told us that he had to replace meetings with phone calls and emails for a few weeks due to the “contact ban,” but recently started offering in-person consultations again, with similar precautionary measures as in Frankfurt.

But another essential service that Rainbow Refugees, the Aidshilfe and similar organizations usually provide has completely stopped: Regular social meetings for queer refugees. Marcus told us that he considered organizing a digital hang-out for their regulars on Zoom, but that isn’t really a possibility for most of the refugees he works with. “They have limited access to the internet, to wifi, so they were not enthusiastic about this possibility at all,” he told us. 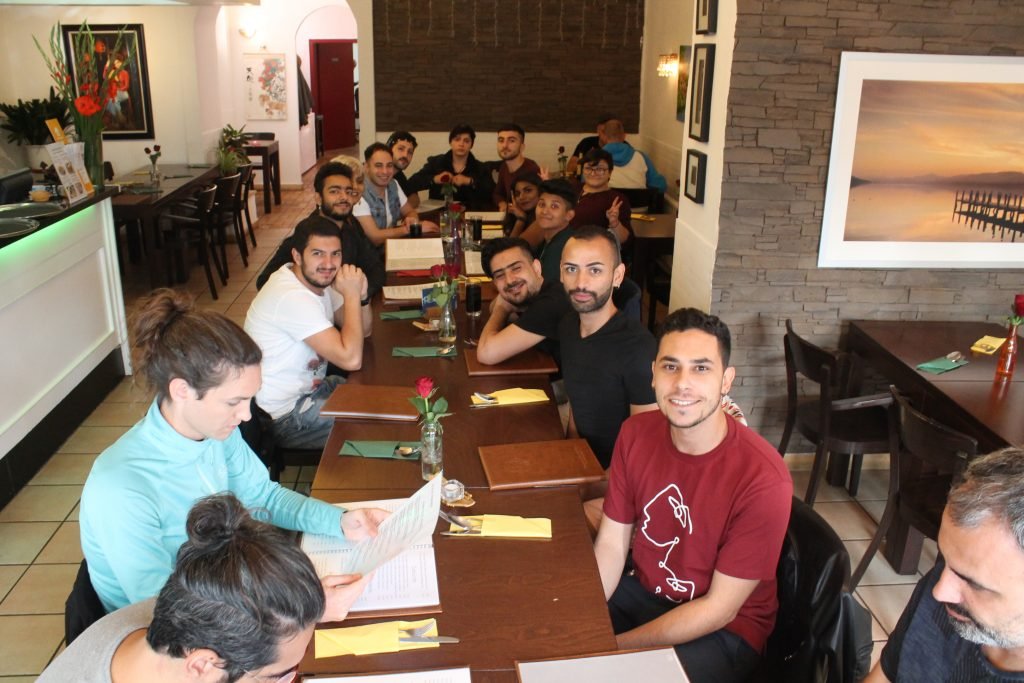 All refugees and refugee advocates we spoke to said they were particularly worried about how the isolation would impact queer refugees and asylum seekers who live in large asylum centers.

Ennis – who only recently moved out of a center - said that large asylum centers are often “populated by very religious people from very religious countries who are very homophobic.”

Because many events, meetings and classes have been cancelled, most refugees are bound to spend more time at the center. For queer refugees, this often means spending more time among people who hold the same resentments as people back home – the anti-LGBTQ resentments that they were trying to escape.

In an article for the news site Al Jazeera, three migration and asylum experts recently argued that “LGBTQI people seeking asylum often experience loneliness and abuse in reception and accommodation camps due to homo/trans-phobia,” and that “the continuing pandemic substantially exacerbated [their] social isolation.”

Adding to the isolation and fear: Many centers have no or only very poor internet, smartphone internet data is quite expensive in Germany, and the centers offer very little privacy – so many refugees can’t use Zoom or Skype to keep in touch with like-minded peers.

Where can queer refugees and migrants find help in Germany?

The homepage Queer Refugees Deutschland, run by the LSVD, offers advice and resources for queer refugees in eight different languages, including German, English, Arabic and Urdu.

They offer an overview of local organizations that provide support to LGBTQ refugees. If the organization in your area does not have updated information on how they’ve changed their counseling policies during the coronavirus crisis, we recommend reaching out to them via phone, email or messenger before going to their office in person.

Queer Refugees Deutschland also has a short guide on what the asylum process looks like in Germany specifically for queer people escaping persecution.

In some regions of Germany, there are asylum centers exclusively for queer refugees to provide a safe home for LGBTQ people who don't feel safe in regular asylum centers. This includes a center in Frankfurt run by Rainbow Refugees and two homes in Düsseldorf. We recommend talking to a local LGBTQ refugee organization about whether this could be an option for you. Unfortunately, the waiting lists for these homes are often long and transfers might not be possible right now due to coronavirus prevention measures.