Racism on the rise in Germany

Discrimination against people based on their ethnic origin has increased, the German anti-discrimination agency says in its annual report. It warns of serious consequences for society.

Ever since the violent death of an African-American man, George Floyd, at the hands of police two weeks ago, a wave of protests has been rolling across the US.

Many people in Germany were also shocked by footage in which he is seen in mortal agony while being subjected to brutal mistreatment for almost nine minutes. Tens of thousands of people across the country took to the streets this past weekend to protest against racism, despite restrictions imposed to stem the coronavirus pandemic,

Amid considerable media attention, they also decried racial discrimination in Germany. For the image of German society, too, has repeatedly been blemished by everyday racism, xenophobic riots and right-wing extremist attacks like those carried out by the National Socialist Underground (NSU).

Recent statistics back up the protesters' criticism and confirm a dismal trend: Racial discrimination has increased significantly in Germany.

According to the 2019 annual report presented Tuesday by the German Federal Anti-Discrimination Agency (ADS), the number of such cases reported in Germany rose by almost 10% to 1,176. They make up 33% of the cases dealt with by the agency. That is the largest share, and not for the first time: In 2016, it was already 25%. Since 2015, when 545 reported cases were listed, the number has more than doubled.

Germany has an "ongoing problem with racial discrimination and does not give enough consistent legal support to victims," said Bernhard Franke, the acting head of the anti-discrimination agency, when presenting the report. The feeling of being left alone with injustice has "dire consequences in the long run that endanger social cohesion," Franke warned, adding, "Discrimination wears people down."

For this reason, the ADS' annual report focuses on the issue of racism in great detail. 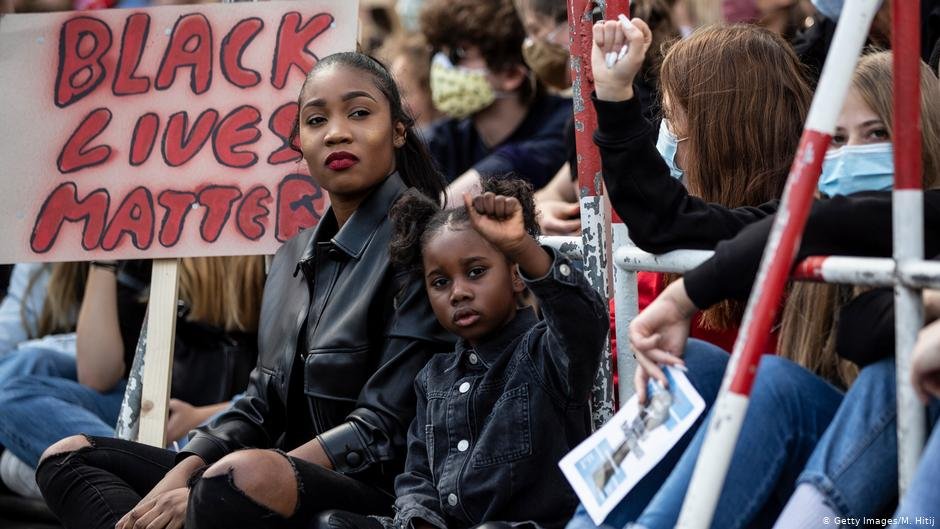 In the report's foreword, Franke writes that 2019 was a year in which "hatred and hostility toward particular groups left deep and painful traces" — from the right-wing extremist murder of Walter Lübcke, a Christian Democratic (CDU) politician who campaigned for refugees, to the terrorist attack on a synagogue in Halle. But he wrote that there were many small incidents and everyday discrimination that had left their mark as well.

To illustrate concretely what this means, the report includes anonymized quotes from people who describe the discrimination they face every day. For example: "A customer recently called through the store, 'Where's my (N-word)? I like it best when he massages my head!'" Or: "A kid at school insulted my brother because he has dark skin. Then the kid hit him. The teacher saw everything, but did nothing.'"

One more example: "Two colleagues from another department approached me, laughing, and asked if I worked in the company to make coffee. I am a civil engineer from Syria and am employed as a structural engineer. When I told them that, they laughed even louder and asked whether I worked according to German or Syrian standards."

Tip of the iceberg

The annual report goes on to say that many of those affected have the feeling that the overall situation has not improved over the past years. They feel that although attacks and murders have shaken society, "the worries, fears and experiences of exclusion had by people with a migration background are ultimately not taken seriously."

Violence, hatred and agitation are only the tip of the iceberg of racist attitudes and resentment, which become apparent much earlier in acts of everyday discrimination, the report says. As examples of this, the report cites ads for rented apartments that stipulate "no foreigners," the discotheque where some are told that "people like you" always cause trouble and the bosses who say a colleague who made a racist joke "didn't really mean it."

In 2019, according to the report, one out of three people with migrant roots looking for housing within the last 10 years said they had experienced discrimination. At the same time, 41% of all respondents in a representative sample stated they had serious or very serious reservations about renting an apartment to an immigrant.

In principle, Germany's General Act on Equal Treatment (AGG) prohibits such things, but the legal protection against racial discrimination in the housing market is "characterized by some exceptions," according to the ADS report. A legal opinion commissioned by the agency comes to the conclusion that the EU Anti-Racism Directive has been insufficiently implemented in Germany.

The ADS urged federal and state legislators to significantly improve both the legal position of those affected and the assistance available to them. It also said the framework for state protection and the legal consequences for violations must be more clearly defined.

Politicians are obviously aware of the problem. Xenophobia and racism in all their aspects will be discussed by a special Cabinet committee, CDU party head Annegret Kramp-Karrenbauer told DW. She said one of the things to be talked about is introducing the possibility of "anonymous applications for accommodation or jobs."

The ADS considers the first anti-discrimination law recently passed by the state of Berlin to be an important step. The law enables people affected by discrimination by police officers or in the education sector to file complaints and claim damages and compensation.

Disadvantage because of gender

According to the ADS report, the largest proportion of discrimination brought to its attention occurs in the workplace or when people are looking for work. The second most common form of discrimination occurs during everyday activities such as looking for a flat, shopping, in bars and restaurants, or while dealing with insurance and banking matters.