'I am Italian too': How #BlackLivesMatter protests reignited the Italian citizenship debate

Global anti-racism protests following the death of African-American George Floyd could impact Italy's citizenship laws. Here, politicians are under pressure to allow more children of migrants born and educated in the country to become Italians.

June 2 is the day Italy celebrates becoming a republic. Partly, it is a day for reflecting on the values of the country and its citizens, and what it means to be Italian. "This year it will be remembered for a series of exceptional events," writes Angelica Pesarini in an essay entitled "Questions of Privilege" on the newsletter for cultural space Il lavoro culturale (Cultural work).

Pesarini is a faculty member in social and cultural analysis at New York University (NYU) in Florence. She is also a black Italian, born in Italy to a family with roots in Somalia and Eritrea, countries that have colonial links with Italy.

Many Italians think "to be Italian is to be white," Pesarini told the BBC in 2019. "I feel I have to justify my Italian-ness a lot," she continued. "People assume I cannot be Italian. When people ask me: 'Where are you from?' I say: 'I'm from Rome.' They ask: 'No, but where are you really from?'" Pesarini says that this frequent exchange demonstrates how "race, colonialism and whiteness are all connected to Italian identity today."

Pesarini is Italian, but her identity is still questioned. For others, the children of migrant parents, it is not just strangers who ask questions about their roots, but the state itself. As Italy's migrant population grows, and more and more children are being born in Italy and growing up and going to school in the Italian system, they ask why they too cannot be recognized as Italian citizens. 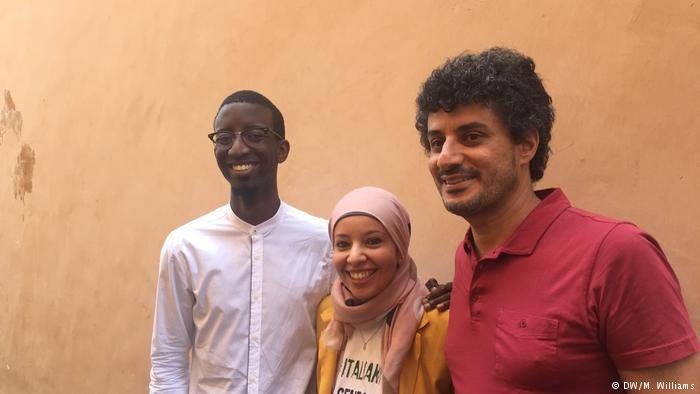 The current law allows Italian citizenship to be granted automatically only to those born to Italian parents. The children of migrants, both those born on Italian soil and those who migrated with their parents as minors, are not automatically granted an Italian passport when they turn 18.

'One million' Italians without citizenship

According to the campaign group "Italiani senza cittadinanza" (Italians without citizenship), there are now one million people in this position. "I feel I am Italian, but it as though the state doesn't see me," says Alessia Korotkova in a video made by Oxfam in 2019. She had hoped to compete at the Olympic Games in Tokyo 2020 but she couldn't because she was unable to get Italian citizenship. "We might seem invisible to the state," Korotkova continues, "but we are not invisible, we ARE here," she says smiling as the video flashes up a hashtag #noicisiamo (We are here). 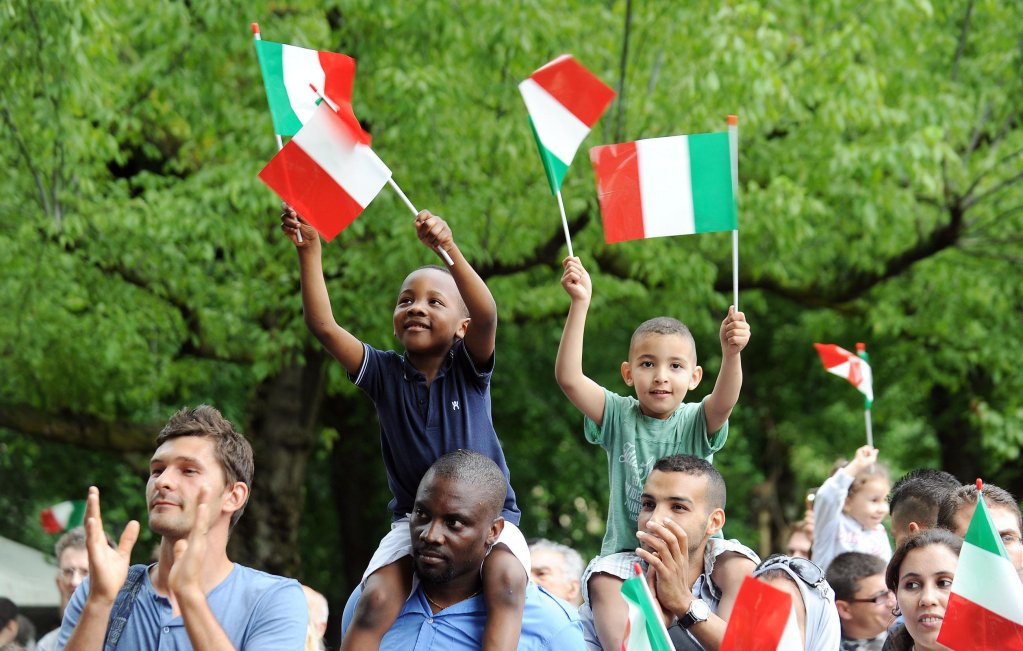 "I'm a foreigner in my own home," says Ghassan Ezzarraa in another video in the series. "I feel like I am in a video game; to become myself, I have to jump the hurdles to the next level," he says. "I am the only person in my family still considered a foreigner," he adds.

One of the lucky ones?

Ghassan might be considered one of the lucky ones. At the end of January 2020, he was granted citizenship in his home town of Reggio Emilia at the age of 23. He had been living in Italy since he was four years old.

But his journey to citizenship, like that of many others, was long and complicated. Ghassan was born in Rabat, Morocco in 1996. Just after he turned four, he and his mother were able to join his father in Italy where he had been living and working. A year later, his sister was born on Italian soil, but even that didn’t qualify her for automatic citizenship.

According to La Repubblica newspaper, as a long time resident, Ghassan's father received Italian citizenship in 2015. His sister, who was still a child, received it soon after, as did his mother, as his father's legal spouse. Only Ghassan, who had already turned 18 failed to "inherit" the citizenship granted to the rest of his family.

Having been through the Italian school system, Ghassan applied for citizenship, traveling to Morocco to obtain all the necessary documents. The procedure should have taken two years, but under the government's migration and security decree, this process was lengthened to four years.

The complications meant that Ghassan had to partially give up on the athletic career he had dreamed of because, as a 'foreigner', he was not eligible to receive sponsorship and training. He took up a job and, with the help of various cultural organizations, campaigned to get his story heard. Finally, the mayor of Reggio Emilia in the north of Italy, did listen and announced the happy news on his Facebook page in January.

The debate on citizenship rights has continued for decades. A commission in the current parliament has been hearing evidence on the issue since late 2019. Its deliberations were largely buried during the restrictions placed on Italy by the COVID-19 pandemic, but now, with demonstrations across Italy taking place in protest over the death of African-American George Floyd, the issue is back in the media, and public, spotlight.

The current government is split on the issue, writes the Italian news agency ANSA. Three different proposals have been put forward. The first is granting citizenship based on where you are born, ie, if you are born on Italian soil, you should be considered Italian. The second is an idea based around education and culture. According to this, if you have been educated in Italian, speak the language fluently and think 'like an Italian', then why shouldn’t you be considered Italian? This second proposal would also allow those who migrated with their parents but grew up feeling themselves to be Italian citizens to access citizenship. The third is a combination of both these ideas. The UN children's charity, UNICEF in Italy, points out that this law would not automatically grant citizenship to any child of a migrant born on Italian soil. In fact, even the new proposals are rich with caveats. Children of parents who are waiting to have their request for international protection decided, for instance, would not qualify. Nor would children born to parents without a legal permit to stay.

A change to the citizenship law would help children of those who have lived in Italy for a long time, completed more than five years of education and/or a professional qualification and possibly obtained Italian citizenship themselves. UNICEF says it is needed to "stop discrimination against those children who are legitimately part of Italian society."

Black people die in Italy too

In her essay, Angelica Pesarini lists some of the black people, many of whom are migrants, who have been murdered on Italian soil. She highlights the death of a Malian man Soumalia Sacko on Republic Day two years ago in 2018. Sacko, she writes, was working "exploited" in the Calabrian fields in the south of Italy. He was helping two workmates collect some material from an abandoned building in the fields, in order to try and construct a shack where they were living. As they were collecting the material, they were shot at by an Italian man with an "unlicensed shotgun." The shots resulted in a head trauma, from which Sacko died. 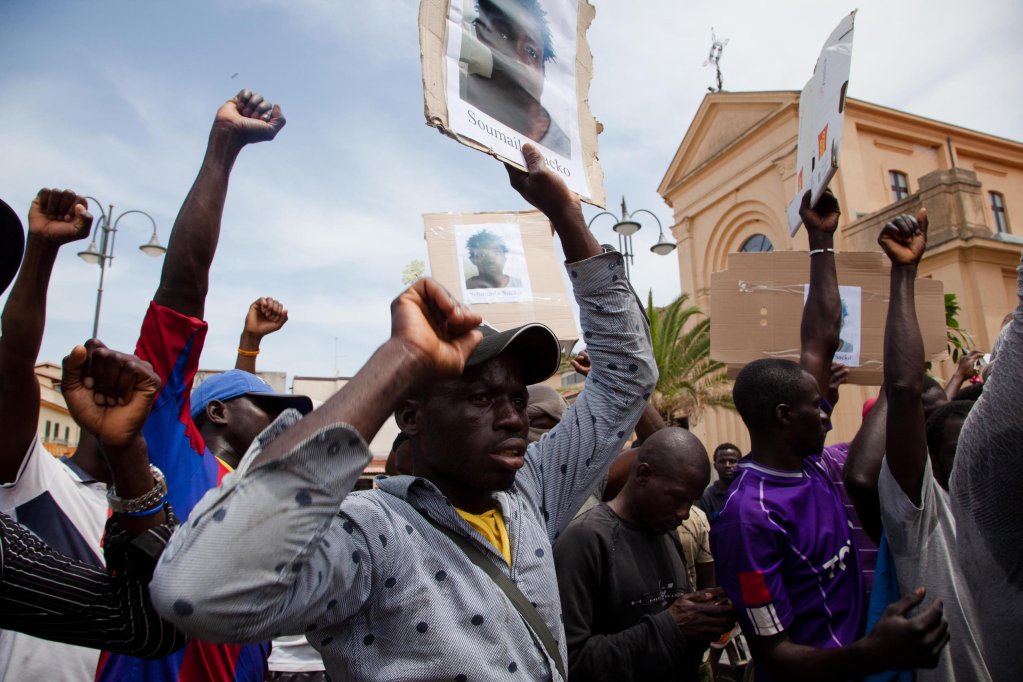 His death, writes Pesarini, was initially "reported in a distorted manner" based on information provided by the Prefecture in Reggio Calabria. They said, that he was "shot at by someone unknown whilst stealing." Soon after his death, the deputy Prime Minister at the time, Matteo Salvini, tweeted about migrants "The fun's over;" referring to the idea that migrants arrive in Italy just to obtain benefits and 'easy' work.

One of the leading members of the Sardines movement, which has been fighting for migrant rights in Italy, is also pushing for the citizenship law to be reformed. "This is such an important law that it shouldn't fall victim to political disagreement or propaganda," Jasmine Cristallo, spokesperson for the "6,000 Sardines" movement told ANSA.

Campaigners are hopeful that they can use the momentum of the protests around the world and anger at institutional racism to change politicians' minds and bring citizenship laws into the 21st century. On Facebook on June 9, Italians without citizenship posted pictures from the latest demonstration in Rome, where Italian-Haitian anti-racism campaigner Stella Jean called for a change to the current citizenship laws. Jean told ANSA: "I'm speaking today because it is no longer possible to remain silent. I don't want my own children to be subject to the threats I received as a girl. Everyone merits citizenship."