Greece: Migrants attacked in the Aegean

Are Greek coast guard forces deliberately sabotaging refugees' and migrants' boats on the high seas as part of a strategy to push them back to Turkey, away from the Greek islands of Lesbos and Samos? A DW investigation.

"Mama, Mama, we're going to die!" A child wails in panic as masked men clamber about on the little migrant boat in the middle of the open sea. The video was posted on Twitter on June 4 by the emergency hotline AlarmPhone. The incident took place in the strait between Turkey and the Greek island of Lesbos. According to the Frontex border protection agency, the Eastern Mediterranean is currently the most active route for migrants and refugees trying to enter the European Union.

AlarmPhone, a private initiative, is a hotline for migrants who get into trouble on the high seas. It forwards emergency calls to the nearest coast guard agency and tries to pressure authorities into acting swiftly to rescue the refugees.

Lorenz, a Swiss volunteer for AlarmPhone, was on duty on June 4. The people on the boat were extremely distressed, he says; the masked men had destroyed the engine, disabling the boat, then left it to its fate. According to the coordinates Lorenz was given, all this took place in Greek waters. "These attacks are completely illegal by any legislative standard, and clearly demonstrate the outrageous force currently being used against refugees along the Greek border," he says.

The AlarmPhone volunteers are hearing about attacks of this nature more and more often. The following morning, on June 5, another boat got into distress with 19 refugees on board. One of them was 16-year-old Farhad (Ed. note: name changed) from Afghanistan. He told us he had fled with his mother and sister, but had lost them both on the way to Turkey. Now he is alone, and trying to get to Europe. He worked in a Turkish factory for four months to earn the money to pay the smugglers.

Farhad described how a rigid inflatable boat approached from the Greek side of the strait and stopped their dinghy. "There were five masked men," he said. "One was steering, two hit us with sticks, one destroyed our boat and our engine with a knife. The fifth just watched." He didn't dare film the attack itself, but he documented the immediate aftermath on his cellphone. 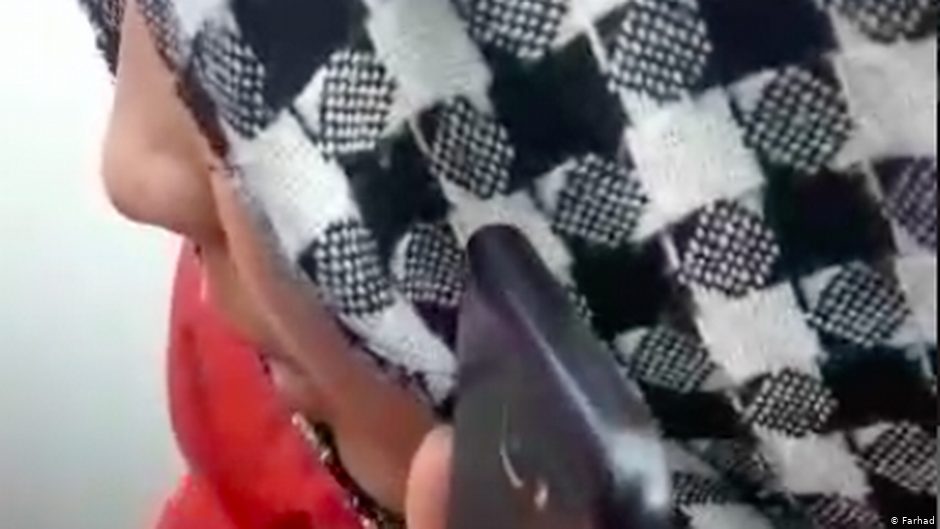 DW has analyzed and verified his videos. They show the hole in the boat, an engine that has been destroyed, and desperate people, who eventually jump into the water to try to swim toward the shore of Lesbos while pushing the boat. A woman shakes her fist and screams, "They sent their friends to wreck our boat — now they're watching us!"

Indeed, a Greek coast guard vessel is clearly visible in the video, with a small inflatable alongside. Farhad marks it for us on a screenshot. He tells DW he is absolutely certain that the masked men were "Greek forces." After all, he says, they came from the big coast guard ship, and were communicating with the mother ship the whole time. 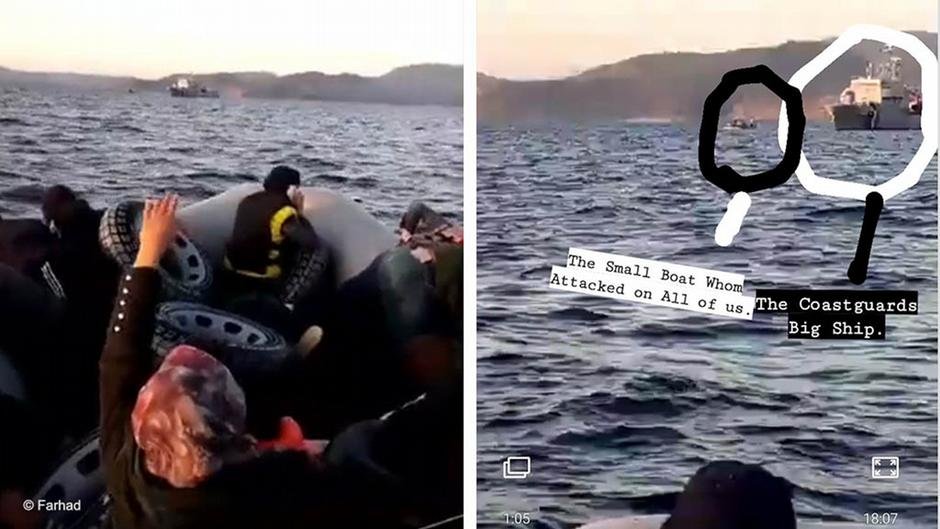 But the involvement of the Greek coast guard is hard to prove. There are scarcely any photos or videos of the attacks, the masked men do not wear uniforms, and their boats are unmarked. That is why the other video, from June 4, is so important.

Through painstaking analysis of the superstructure and distinguishing features of the boats, the investigative online platforms Bellingcat and Lighthouse Reports were able to unequivocally match the rigid inflatable to a Hellenic coast guard ship. The inflatable belongs to the Greek coast guard vessel ΛΣ 080, and this ship has been proven to have been deployed off Lesbos that day. 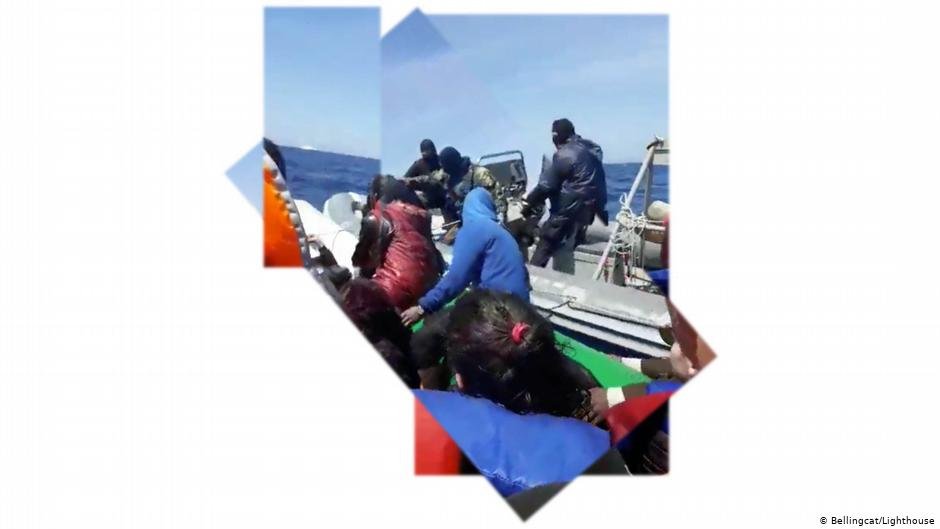 Greece, however, continues to reject any assertion that it is using illegal methods against migrants and refugees arriving in its waters. In response to a request from DW to comment on the reports of illegal pushbacks, the Greek coast guard said that amidst the coronavirus pandemic the country is confronted with "massive" and "organized migration flows" from Turkey. The coast guard further stated that it protects its European maritime border in accordance with national and international law and that any published accounts to the contrary stood in connection with "fake news" and from "intentional misinformation against this institution."

The European border protection agency Frontex, which works closely with the Greek coast guard in the Aegean, also refrained from a direct response to a specific inquiry from DW about the events of June 4. The agency's headquarters in Warsaw simply replied with a general statement that "Frontex is fully committed to uphold [sic] the highest standards of border control within our operations, and pushbacks are illegal under international law."

However, the video documentation and witness statements collated by DW over several weeks suggest that these attacks and pushbacks are no longer isolated incidents. Rather, they are intensifying into a brutal pattern of intimidation that violates both national and international law.

The UN High Commissioner for Refugees (UNHCR) is also concerned. Boris Cheshirkov, the spokesman for the refugee agency in Greece, confirmed to DW that, since March, it had documented dozens of incidents like these. The UNHCR has called on the Greek government to investigate them, and has made clear that while "Greece has the legitimate right to control its borders and manage irregular migration," it must only do so "while respecting international human rights and refugee protection standards."

Hours after Farhad called the emergency hotline on June 5, their boat was still drifting on the water, gradually deflating. Farhad told us that, instead of coming to their assistance, Greek patrol boats drove past them, very close, trying to make waves that would wash the disabled boat back into Turkish waters. Eventually the passengers were so exhausted that they stopped paddling. By the time they were finally rescued by the Turkish coast guard, there was hardly any air left in the back of their boat. Back in Turkey, we spoke to 16-year-old Farhad. His voice was shaking; he was distressed, frustrated and despondent. This had been his fifth failed attempt. 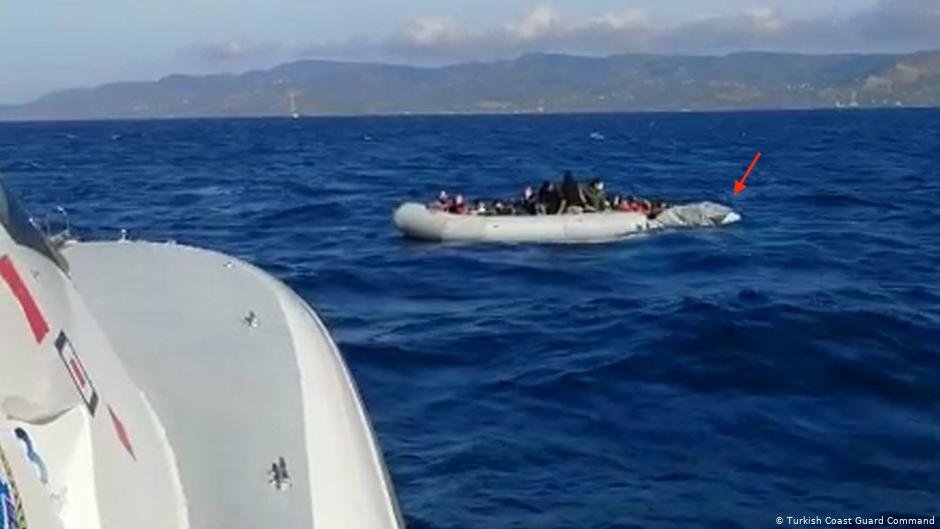 'There's no good side here'

The Turkish coast guard regularly publishes photos of these "rescues." However, all observers in the region state that Greece is not the only party reportedly violating the law. All too often, they say, the Turkish side will also spend a long time watching, preferring to film their Greek counterparts' alleged misconduct instead of acting promptly to save refugees in distress. "There's no good side here, because both sides are playing a game on the backs of vulnerable people," says Tommy Olsen, the founder of the platform AegeanBoatReport. "And the EU seems to have given Greece the green light for this." Olsen has been meticulously documenting the refugee movement in the Aegean since 2017.

Sometimes, migrants are directly caught between the two fronts. This was what happened on June 22, when a boat carrying 35 men, women and children was pulled back from Greek waters toward Turkey. A refugee filmed the scene. Once again, the video shows a rigid inflatable boat with a crew of men in black — and behind it, clearly recognizable, a Greek coast guard vessel.

It is not clear what happens next. The migrants who were on the boat report that a Turkish patrol boat suddenly raced toward the Greek ship, and shots were fired. Panic broke out among the migrants. While we are verifying the videos, we suddenly see a familiar face: 16-year-old Farhad, with whom we had lost contact.

In this video, he is speaking to an operator from the European emergency number, 112. "You should stay calm, and they will come as soon as possible. They know about your location," says a female voice, in English with a Greek accent. "The Greek coast guards are near, too much near to us," Farhad tells her again, clearly frustrated. "They are watching us, they know where we are. When will they come?" "As soon as possible," repeats the woman. "Wait, and they will come, OK?" And then she ends the call.

DW's Esther Felden and Amanullah Jawad contributed to this report.