Lebanon's economic crisis is hitting foreign domestic workers particularly hard. Because many employers can no longer afford to pay their wages, many kick the women out onto the streets.

"The last few evenings, young women were found out on the streets again," says Hessen Sayah of Caritas Lebanon. The women Sayah is talking about are migrant domestic workers and left alone on the street, they are in need of help and support, says Sayah, who works for the charity organization's migrant affairs department.

For months now, many Lebanese people have been struggling financially amid the economic crisis and can no longer afford to pay workers to clean their homes, look after the children and cook. As a result, some want to get rid of their domestic workers and kick them out on the streets.

"We often come across frightened, desperate and poor women," says Sayah, adding that Caritas tries to do what it can to help them.

The organization runs a shelter with a capacity for 120 women. There, women receive medical care and legal assistance and can contact their relatives abroad.

One of them, a 20-year-old woman from Ethiopia who wants to remain anonymous, describes in a Caritas video how she used to work in two Lebanese households. This meant getting out of bed at half-past five in the morning and working until after 2 o'clock in the morning, she says. "My employer did not pay me for months and often beat me, too," she says in Arabic.

She adds that she was forced to drink water secretly in the bathroom and that she didn't have enough to eat. She also relates how her employer, who had her passport, told her she wouldn't let her leave the country, even though she wanted to return to Ethiopia.

Altogether, 37 Ethiopian women live at the shelter, says Sayah. The remaining 83 are from other African and Asian countries, among them Ghana, Bangladesh and the Philippines.

Camped out at the consulate

Sayah says some employers drop off their domestic helpers at the Caritas shelter because they don't know what else to do. Others bring them to their respective consulates or embassies, hoping they will take care of their citizens. Some domestic workers even run away from their employers. Currently, a dozen women are camped out in front of the Ethiopian Consulate in Beirut, hoping that someone there will help them get home.

The 21-year-old Makda is one of those who was dropped off at the Ethiopian Consulate by her employer against her will. "Madam didn't pay my last wages, and said she couldn't afford to buy me a return tight," Makda told Amnesty International. She says the police found her in tears in front of the consulate and called her employer. "Then she came back with my passports and other documents," Makda says. "But then she left again; what do I do now?" 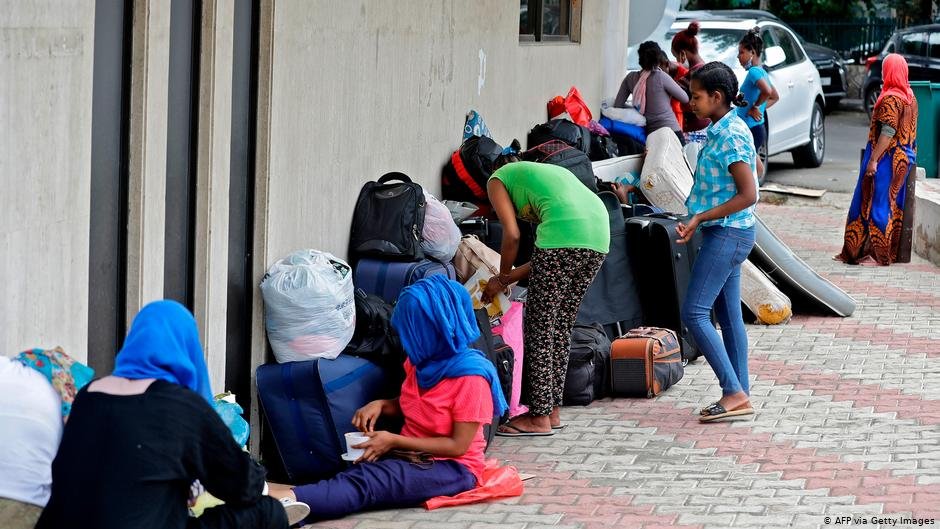 Sayah calls the situation a crisis within a crisis: Lebanon's economic woes have been compounded by the coronavirus pandemic. Sayah says the lockdown has increased problems between many domestic workers and their employers.

According to official statistics, some 250,000 foreign domestic workers are employed in Lebanon. Most of them are recruited through labor agencies and promised they will be paid in US dollars so they can send remittances to their families at home.

In reality, the number of such foreign workers is estimated to be much higher. Many of them come to Lebanon without papers and therefore do not show up in official figures. They are variously employed in private households, to clean buildings, to collect garbage or as kitchen helpers in restaurants.

The "kafala system" is to blame for this state of affairs. A kafil, or sponsor, who is usually the employer, carries complete legal responsibility for a foreign worker in Lebanon. That means a migrant domestic worker's work visa is directly linked with the name of her employer or employers. Usually, the maids live in the sponsor's household and earn between $150 and $250 per month.

Some employers are known to take away the worker's passports. Even in the past, there were frequent reports about employers not paying wages on time and granting only one day off each week. It is not uncommon for the maids to be subjected to sexual, physical and psychological violence.

The injustice of this sponsorship system (kefala) is unbearable, and many Lebanese citizens don’t see anything wrong with it. I really appreciate the efforts put by @Caritaslb @CaritasAustria regarding this “modern slavery”. We are all equal pic.twitter.com/g6iPTy2aIz

When employers wish to fire their employees, these often end up on the streets without papers, facing deportation. Numerous civil society organizations have criticized how utterly dependent migrant workers are on their employers. Caritas Lebanon's #EndKafala social media campaign seeks to draw attention to the issue.

"We demand that the kafala system be changed, because it is precisely this system that makes possible such violations of these women's human rights," says Hessen Sayah. She says her organization has been in contact with Lebanon's Labor Ministry, which has pledged to tackle the issue. Caritas, along with other civil society organizations, demand that foreign workers be issued standardized labor contracts that guarantee them a wage and accommodation. The women who come to Lebanon as migrant domestic workers are among the most marginalized people in Lebanese society, says Sayah.

Caritas Lebanon and other NGOs rely on donations to help these women. It is not likely that the Lebanese state will offer the domestic workers financial aid any time soon, as is preoccupied with a range of other challenges. The country is mired in a political, financial, banking and currency crisis. The Lebanese pound is in free fall. And according to the latest consumer price index (CPI), the cost of certain basic goods has risen by 60% since March. The government estimates the inflation rate at 25% for 2020.

Currently, many airports around the world remain shuttered. But even if planes start taking off again, it is not clear how the women will make it back home. How would they pay for the ticket? Will they ever receive outstanding wages?

In the past months, three repatriation flights were organized by various embassies. But that is a mere drop in the bucket.