'Those two days changed my life': How a trip to Calais cemented one volunteer's desire to work with refugees

Sol Escobar is the chairperson of the Cambridge Assessment Refugee Support Committee in the UK. At the beginning of 2019 she went to Calais as a relief volunteer -- a trip that convinced her that she needed to do more to communicate refugee and migrant stories in order to change the narrative of them within the community.

"Refugee stories are suffering, struggle [...] but also resilience and success," says Sol Escobar, chairperson of the Cambridge Assessment Refugee Support Committee in the UK. Sol, as her name might suggest, burns bright with fiery energy and enthusiasm. She talks to InfoMigrants in the middle of UK refugee week, during which she and the team have been busy organizing talks and online forums so that refugees and migrants can share their stories with the wider public.

"That is how you break down personal prejudices by having that personal connection with someone. I try and channel my rage and sadness into positive action," she says with a smile in her voice. Her mission is to "facilitate conversations."

By day she works for Cambridge Assessment, a non-teaching department of the University of Cambridge in the UK, where she is an Assessment Manager in the languages team. On top of that, she and her colleagues are busy organizing a refugee support group within Cambridge Assessment and volunteering with various local Cambridge charities for a few hours every week. 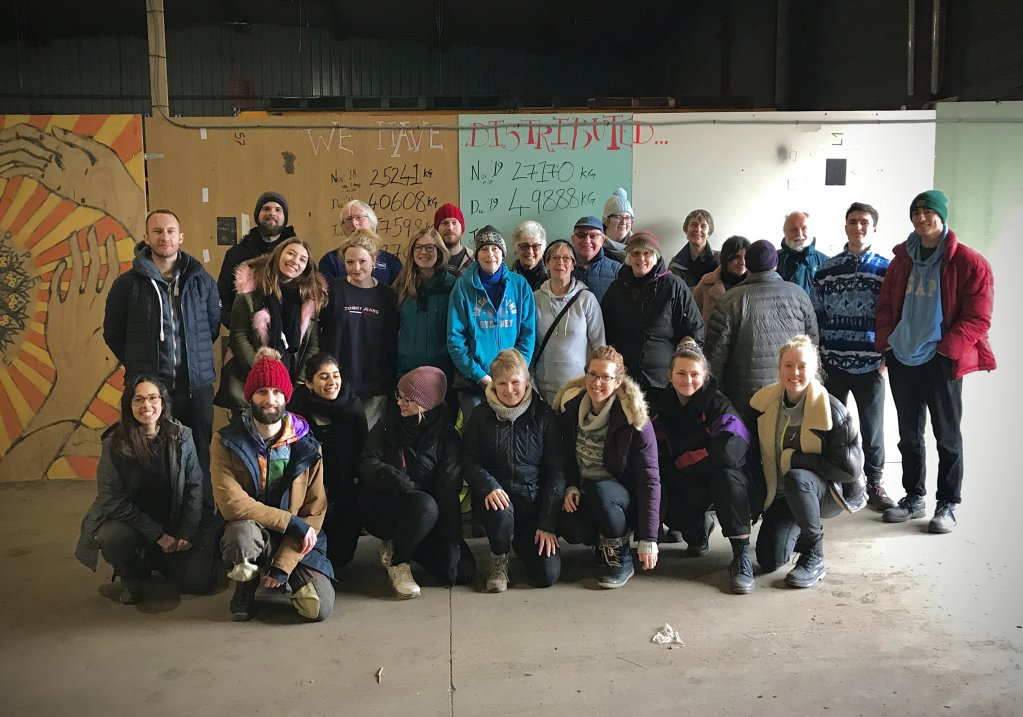 'A roller-coaster of emotions'

Escobar, along with a few others, set up the Refugee Support Committee just before UK Refugee week in 2019. The desire to do so built from a trip to Calais she took at the beginning of 2019 with Cambridge Convoy Refugee Action Group (CAMCRAG). She remembers being in the warehouse sorting donations in Calais and wondering how an earth could people survive sleeping outside when it was minus 3 degrees celsius inside the warehouse. "It really changed me," she says.

"Coming back, it was such a roller-coaster of emotions. Luckily the charity offers a counseling service. What I found was I came back and I would talk to people at work and all I could think was 'but you don't understand [what the reality is like for migrants and refugees in Calais] because you haven't seen it, you don't know what I am talking about.'" This made her feel not only sad, but also angry and numb, all in the space of a week, she says.

After talking through these emotions, Escobar decided to use "the rage and sadness," to spread the awareness she had gained first-hand in Calais. She says going there and seeing what people are going through is really different to watching a report about it on the news. 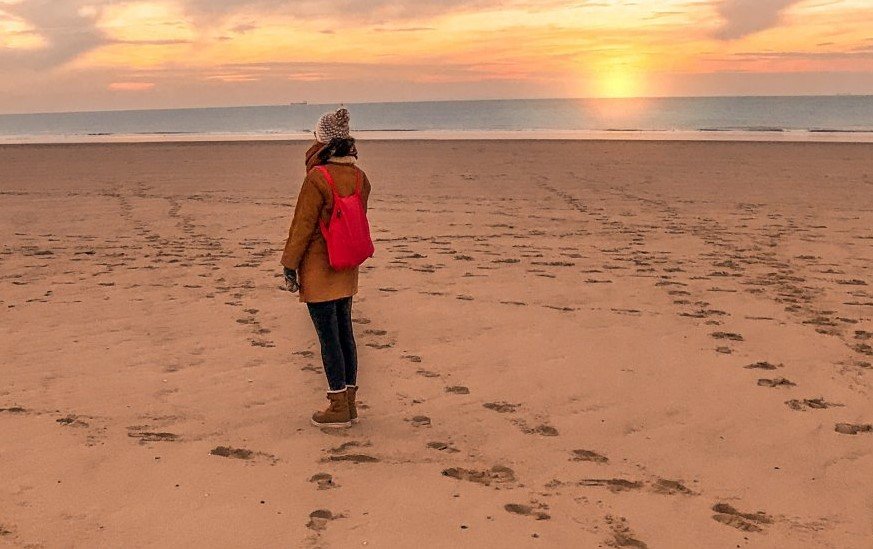 "It started with my partner Pete and I organizing a lunchtime seminar [at work - Pete also went on the Calais trip and the two work together]," Escobar says, to tell people about what they had seen and things grew from there. First one, then a couple of colleagues accompanied her on the trips to Calais with CAMCRAG. She saw that there was an appetite for volunteering within her organization and so decided to form the committee to get things done "in a more organized way."

'What you give a refugee shows what you think of them'

Escobar says that when volunteers are working sorting donations in the Help Refugees UK warehouse there are messages up all over the walls reminding them that "what you give a refugee shows what you think of them." 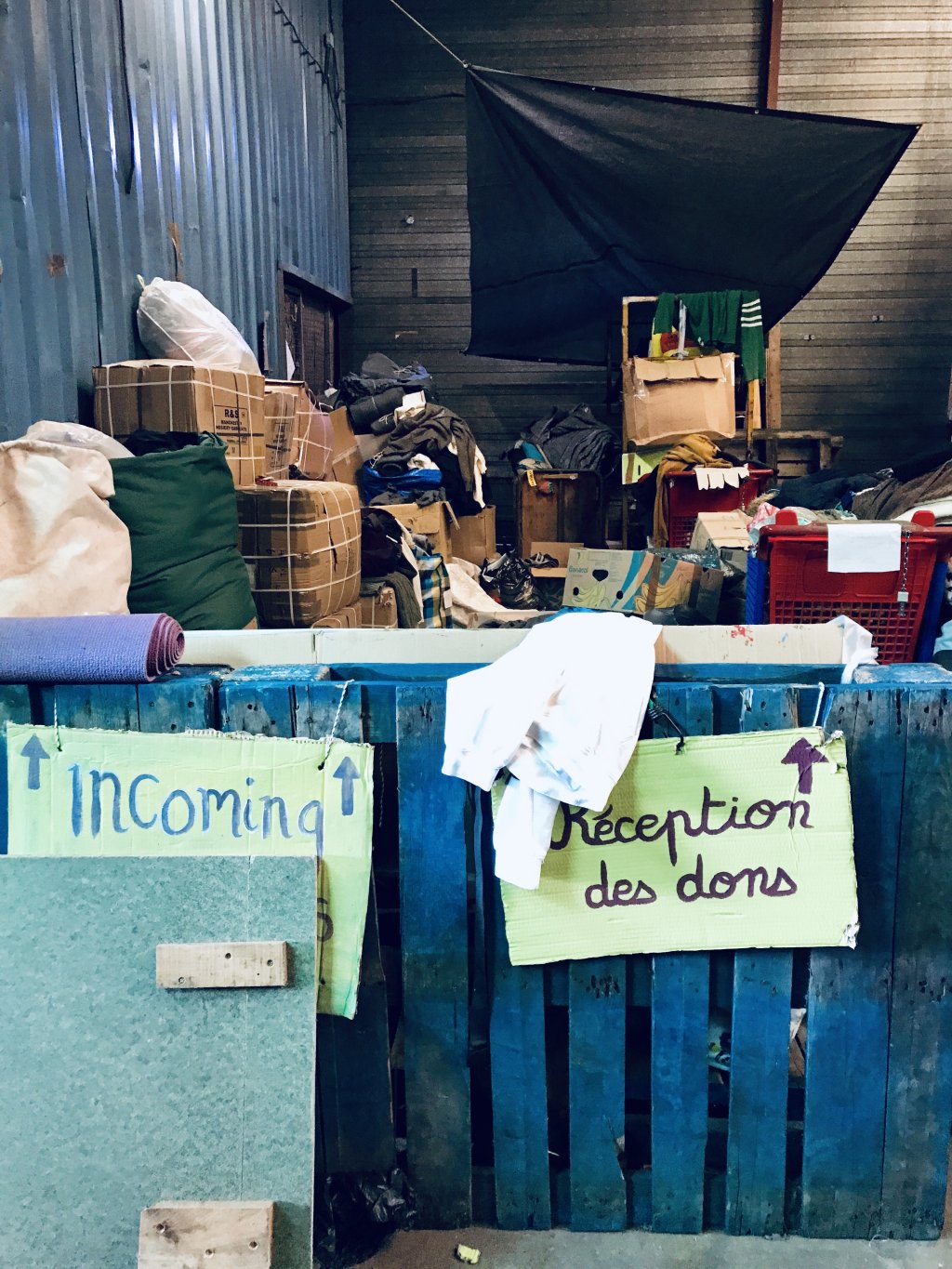 It's a reminder, explains Escobar, that as you are sorting items you need to make sure that they are "in a good state and be of quality" because "if you wouldn't give it to a friend, you shouldn't give it away." The volunteers learn that if refugees and migrants receive items which are "dirty torn or in bad shape [it] dehumanizes people even further."

In 2019, during UK Refugee Week, the support committee brought in various refugees to tell their stories in person. This year, because of the coronavirus pandemic, the events were organized as web seminars and forums. The important thing though, says Escobar is that the stories get heard.

"Facilitating that conversation has a deep effect on people. Hearing someone telling you first hand what it is like. After that, people have more tools to process news or handle information because you have more first hand accounts of what the refugee crisis is actually like." 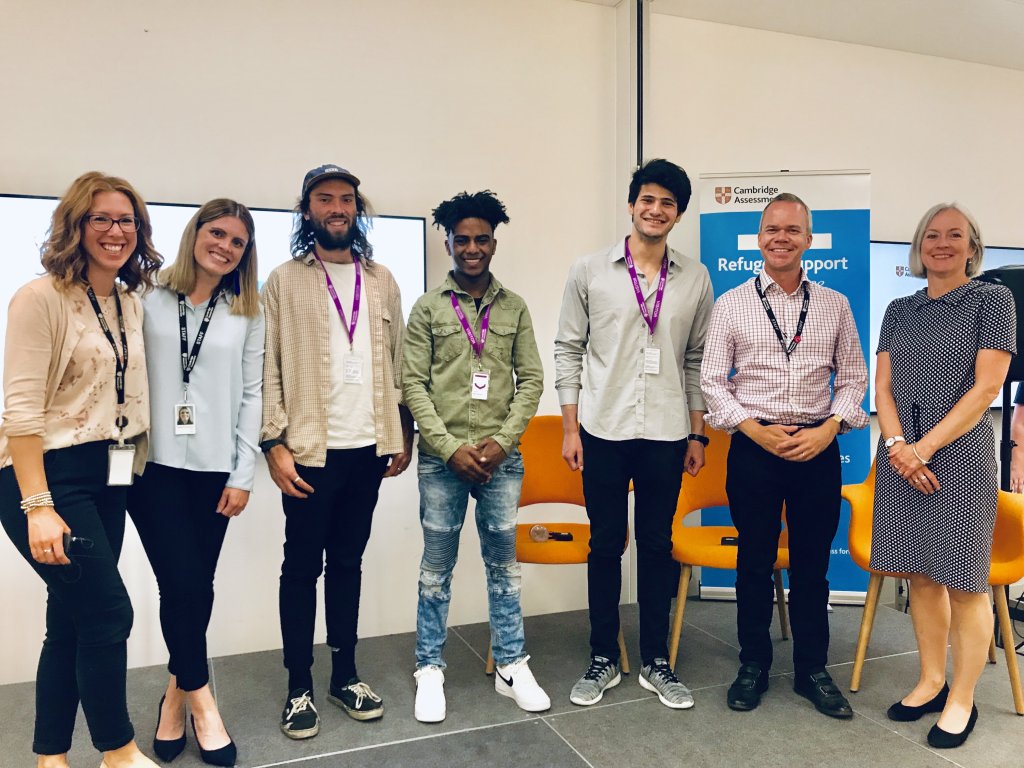 And that knowledge, believes Escobar, prompts people to want to help too. "Once people are aware, they want to help. Because how could you not?" she says with a laugh.

'A proud tradition of offering sanctuary'

Some of her colleagues are helping with volunteer mentoring on a free online IELTS preparation course. Via the online platform "Future Learn" volunteers from Cambridge Assessment help refugees prepare for their English examination. Access to the teaching for the examination has been made free of charge via "a consortium of universities that work with refugees."

Some colleagues were already volunteering offering one-to-one tuition for refugee resettled families within their homes with local charity Cambridge Refugee Resettlement Campaign when the COVID-19 lockdown suspended all that. Cambridge Assessment helped with a donation of laptops for some families so the teaching has been able to continue with a few online. 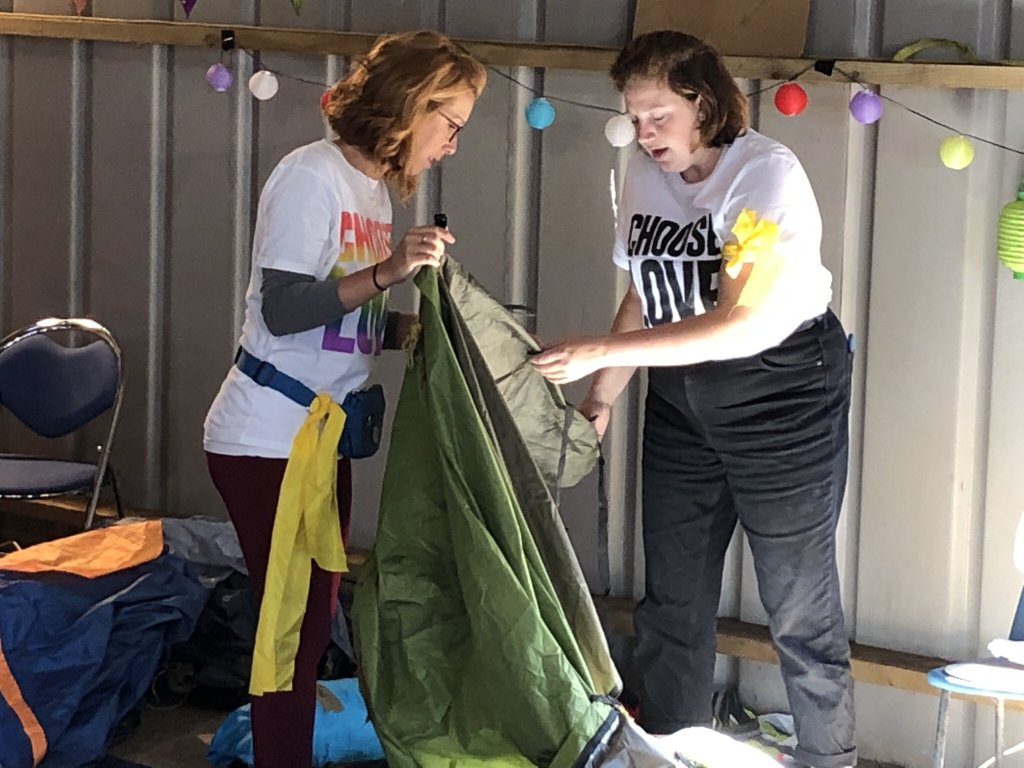 According to the local charity, Cambridge, the town, and the University that bears its name, has a "proud tradition of offering sanctuary." This charity helps Syrian families resettled under the UK government scheme get to grips with life in the small British city, offering everything from driving lessons, to help with English.

'Smuggled in a suitcase'

During refugee week, the support committee screened a documentary, telling the story of a young man from Syria, Ayman who after 13 months trying to get to the UK from Calais by attempting to jump on trains, lorries and ships, and failing, eventually smuggled himself to the UK huddled inside a suitcase on a coach.

It was stories like Ayman's which firmed up Escobar's own commitment to spreading the message.

She still volunteers in Calais. About every six weeks, she joins a convoy which heads out of Cambridge "on a Friday night after work and comes back on Sunday. Sometimes there are 10 of us, sometimes 30." Escobar explains that they help with "whatever is needed," and that the group act as kind of relief aid for the more established "long-term volunteers". During lockdown, their work has been halted, but they hope to restart visits in September. 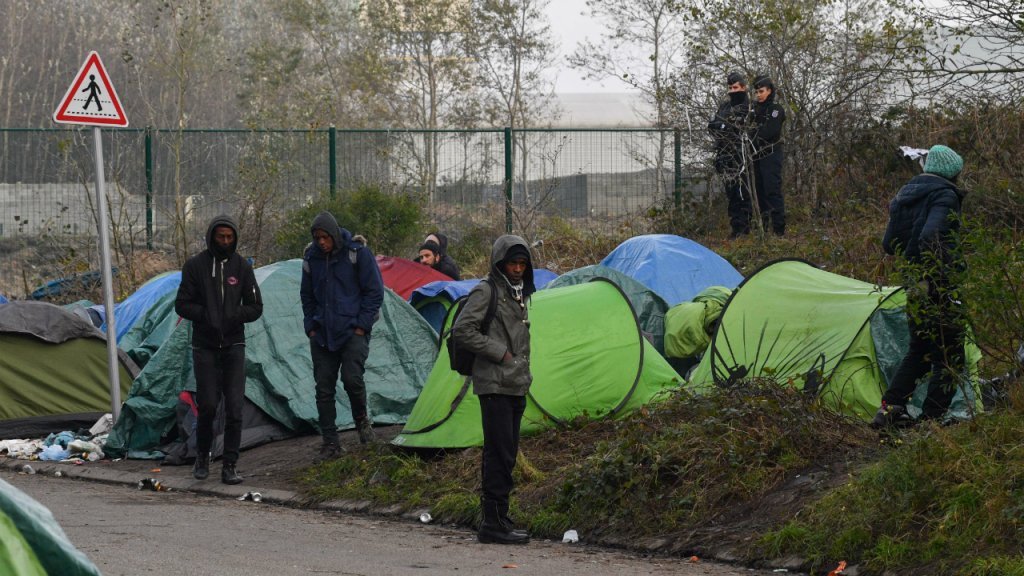 On arrival, the Cambridge volunteers are given a debriefing and told which group of refugees might have been evicted by the police, which ones have spent a night in hospital or might need more help. "The French riot police are very aggressive," says Escobar.

"They go to these settlements, they take their tents and sleeping bags and sometimes beat them up and the local charities have to go out every time this happens and then redistribute tents and blankets. They want to make it as hostile as possible for them to settle down so another camp like the Jungle camp doesn't start up again. They face immense police brutality on a regular basis."

Originally from Uruguay, Escobar describes herself as "the perfect definition of an economic migrant." She has lived in five countries and speaks six languages. Escobar laughs with irony about the unfairness of how one person who has migrated might be 'judged' by the wider society compared to another.

"No one ever asks me why I didn't stay in the first country I lived in," she says, before agreeing that it is probably because she looks white and European and has a career, and been able to study, in the UK. "Many of the refugees and migrants I have met have more degrees than I have," she points out passionately.She thinks the public's fatigue with migration comes because seeing depressing situations on the news, "can be emotionally draining and that develops resistance because people want to ignore that." She thinks if people start to engage on a personal level with migrants and refugees and hear their stories, they will stop seeing a mass and start seeing the individuals. "This is how we can catch people's attention," she says, warming to her theme. 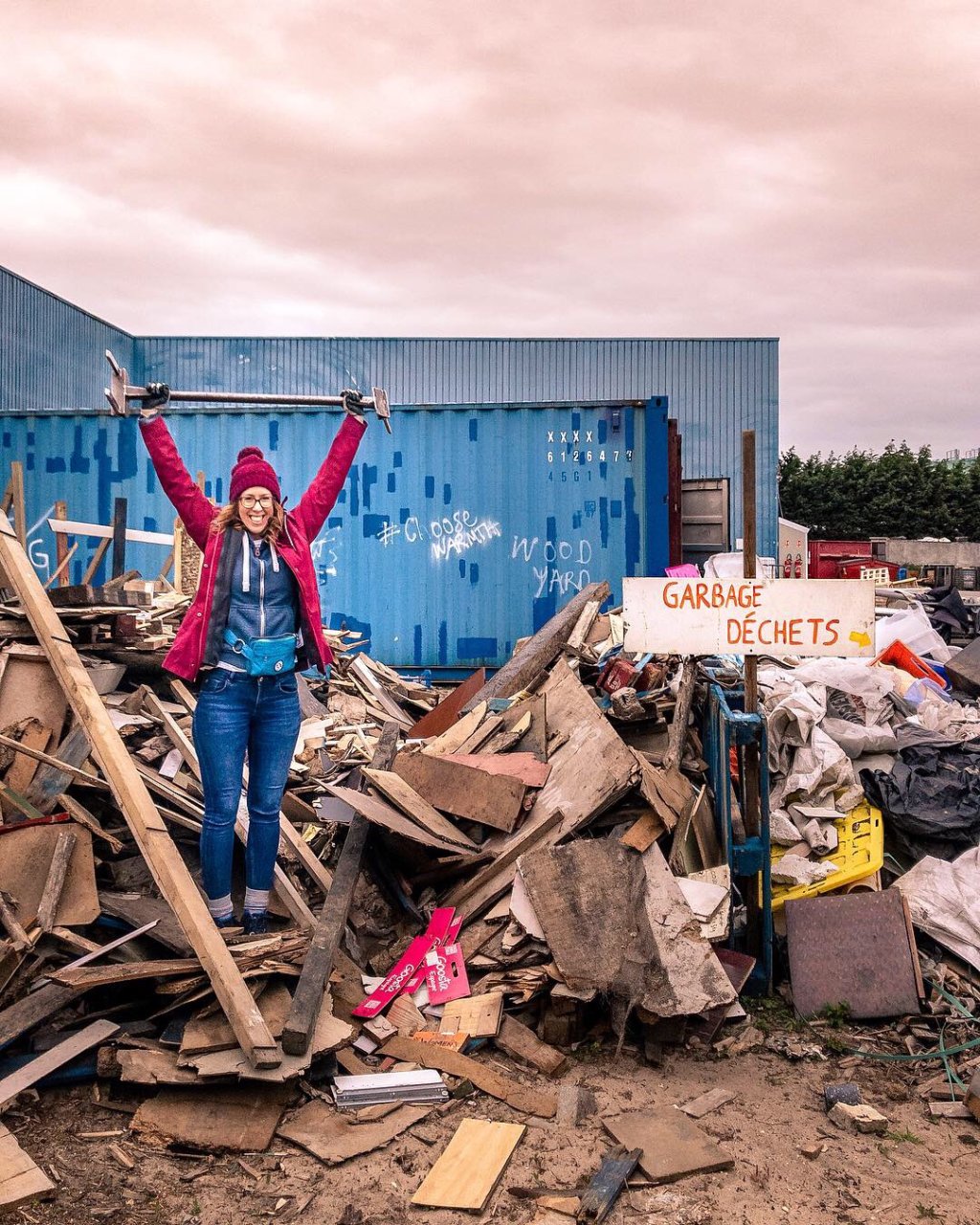 She is also keen that by seeing people's individuality, they will see that they can learn something from the refugee or migrant too. That integration is not, and should not just be, a one way street.

Escobar's next plan is to start working within big organizations to get their staff as enthusiastic as she is about the refugee community and to persuade their employers to invest some of their corporate responsibility funding into refugee projects for the future. 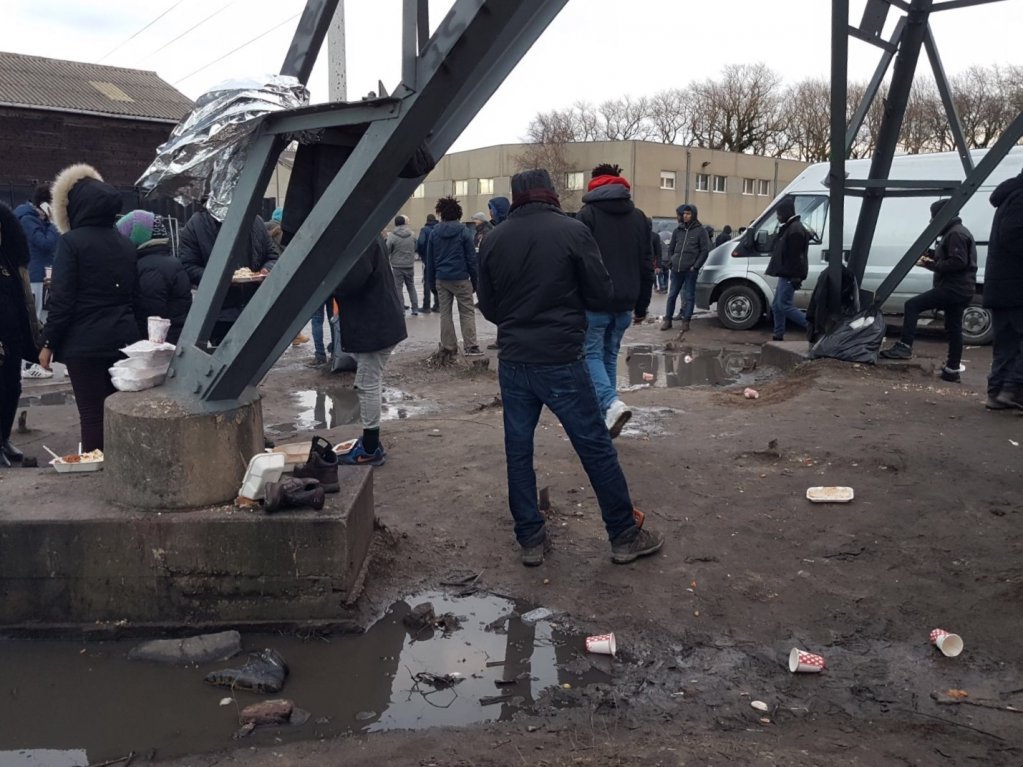