The Legal Centre Lesvos, a legal charity registered in Greece and operating on the island of Lesbos, has just released a report in which it has documented allegations of illegal push-backs of migrants by the Greek authorities in the Aegean Sea.

"This video is from today, when we arrived [at] Mytiline in the morning," begins the testimony of one survivor of an alleged push-back who speaks in Arabic on a video seen by the civil society organization Legal Centre Lesvos (LCL).

"Yesterday, at about midnight, we left Turkey, and we arrived this morning," he continues. The man says that he and his group got within about 50 meters of the island of Lesbos when they were intercepted by the Greek authorities. He says "the Greeks came and took us. They brought us in the middle of the water, and they left. We asked them, 'where are you taking us?' they said, 'to the port' They put us in the sea, and they left. And the Turkish coast guard came and took us."

This man’s testimony is one of 30 collected between March and June by Legal Centre Lesvos. They say in their report that although "reports of collective expulsions are not new, […] Greek authorities have introduced new tactics since March of this year to prevent the entry and enforce the return of migrants, including those who have already reached Greek territory."

📣PRESS RELEASE: In a report released today by @lesboslegal, testimonies from 30 survivors detail the systematic, unlawful and inherently violent nature of collective expulsions in Aegean Sea, amounting to a crime against humanity. #Lesvos #refugeesgr https://t.co/LBkDsZt1J9

One of the new tactics, says the center's report, is the use of life rafts for expulsion. The center claims the Greek authorities abandon the people on board these motorless life rafts at sea in open water until they were later rescued by the Turkish coast guard.

LCL says on its website that it provides "free and individual legal support to asylum seekers, migrants and refugees and advocates for human rights and for equal access to legal and safe routes of migration in Lesbos, Greece and globally." It says it is trying to provide legal support to the people who provided testimonies for its report.

LCL claims that the evidence it has collected demonstrates that the "Greek government is openly pursuing a policy of deterrence and violent disruption of migrant crossings, with little regard for its obligations deriving from international law and specifically from the non-refoulement principle – and even less for the lives of those seeking sanctuary." 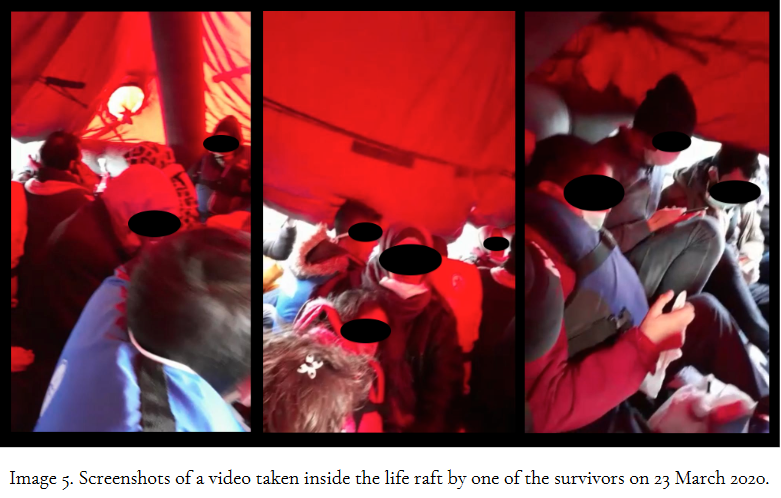 The expulsions mentioned took place "from or near the coast of Samos, Chios, Lesbos and Symi" and were collected from 30 people who were subject to these expulsions and seven individuals who "were in direct contact with survivors, or were witness to, a collective expulsion."

The LCL report provides video evidence, photos and reports from the Turkish coast guard which confirms having picked up groups of migrants on the days they were said to have been expelled by the Greek authorities.

According to the report, many of the expulsions proceeded in a similar fashion. Migrant boats were either intercepted at sea or, in a couple of cases, soon after they had made landfall in Greece. For those still at sea, survivors said that the Greek authorities, although nearby "refused to assist their boats for a prolonged period of time." Some said that the authorities had even "damaged or removed" the motor or gasoline tank of their boat.

For those who say they were intercepted on land, they speak of having been taken to "an unofficial detention site" where they were held for a long period of time, after having most of their belongings confiscated, before then being expelled by sea. Some migrants say they were detained "for several hours" while others claim they were held for two days "without food or water."

Several migrants said that the Greek authorities gave little or no information to migrants about where they were being taken, or what was happening to them. One said, "When we asked [the Greek authorities] where are you taking us, they said 'to the port?'" Before allegedly forcing them into a life raft and leaving them in the open sea.

The LCL report said that three survivors reported being "beaten by the authorities upon being brought to Greek vessels." Some said they were beaten "before being thrown on to life rafts." One report claimed that each migrant was walked by masked men to somewhere they couldn't see where the other migrants could only hear their screams. And several claim that men, women, children and people with disabilities or illnesses were thrown or forced to jump, sometimes from a distance of three meters from the larger vessel on to the life rafts down below.

During two of the expulsions, migrants reported being "instructed to sit, heads down, with the threat of being hit in the face with a baton if they look up."

Several migrants from three different expulsions claimed that the Greek authorities confiscated their possessions, removing cell phones "depriving them of the ability to document their detention." Some claimed that "repeated requests to access medicines in their bags for an amputee and an ill child were denied." Some of those who were stopped at sea also claimed to have had their identity documents and "large sums of money confiscated upon being transferred to the Greek authorities' vessel."

The report said that on two occasions the migrants’ arrival on land was not recorded, thus depriving the migrants of the possibility of applying for asylum. This, said the report, "effectively foreclosed any opportunity for individuals to legally challenge their detention or subsequent expulsion."

Neither interpreters were provided nor information that the migrants could "reasonably be expected to understand."

The report provides three case studies, one being of an expulsion which occurred in March off Symi island. A group of "31 people of Syrian origin, including 19 adults and 12 children" left the Marmaris region of Turkey in a rubber boat with a small motor. This group reportedly reached Symi and sent relatives GPS location and pictures of the group sitting on land. 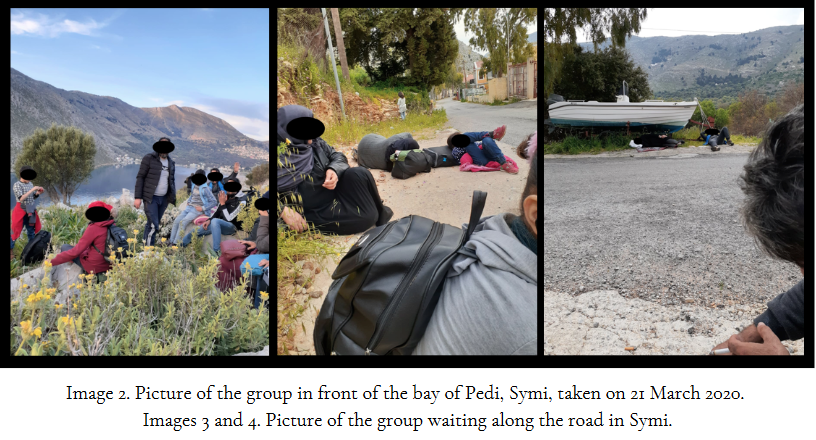 27 of these 31 "have relatives with international protection or pending asylum claims in other European countries. At least two intended to make family reunification applications to join relatives elsewhere in Europe." LCL says this group were intercepted by Greek police officers and "escorted to a nearby port," where they were then detained in an "unofficial site ...for two days and two nights."

Two days after their arrival in Greece, on March 23, they say they were picked up by a "large gray military ship." Those on board were armed and hooded and masked "with COVID-19 masks." According to members of the group, they thought they were being taken to Athens where they could apply for asylum. Instead, after about 90 minutes sailing, they stopped in the sea and one by one they were "forced individually to jump in an orange inflatable life raft approximately three meters by three meters, without a motor."

In a second case study, in May, a group of 30 people say they were approaching Samos island when they were stopped by the Greek coast guard who allegedly "damaged their engine with an iron pole." The coast guard then forced the people into a life raft without motors and "stole their phones and money." The life rafts were then dragged by ropes into open water where they were left and picked up by the Turkish coast guard who detained them for 18 days with "inadequate food, water and medical care."

In the third case study, which occurred on June 19 off Lesbos island, a group of 35 people from Somalia, the Palestinian territories and Syria say they were intercepted just 50 meters from Lesbos. They were then towed in their boat back to open water between Greece and Turkey and left there.

About four hours later "they were rescued and brought to Turkey." In all these case studies and the other incidents documented by LCL, the center says that Greece is violating its "basic international obligations" and committing "crimes against humanity."

The report says: "The act of abandoning people at sea on a motorless raft does not only constitute a denial of assistance to individuals in distress, it also amounts to deliberately placing individuals' lives at serious risk and therefore necessarily violates their right to life according to Article 2 of the European Court of Human Rights (ECHR)." It says that Greece has also failed to fulfill its duty of providing an "adequate and effective search and rescue service at sea." 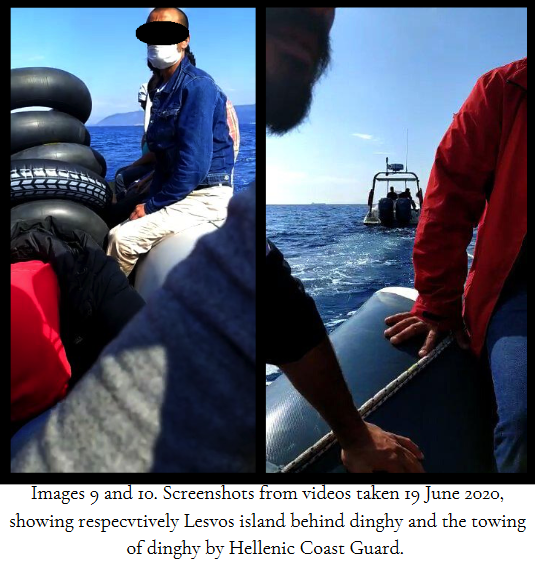 By knowingly pushing them back towards Turkey, they are failing to protect them from the "exposure to risk of torture, inhuman or degrading treatment." It said when they arrived in Turkey, some of the migrants were "held for up to sixty-five days," in "overcrowded jails, without access to adequate food, water, hygiene facilities, medical care and legal assistance." It said the Greek authorities could "reasonably be expected to know about the poor conditions existing in Turkish detention centers."

LCL also says that these kinds of "collective expulsions, are in breach of the principle of non-refoulement established under the Geneval convention." Because the migrants had left Turkey without legal exit documents they were then in breach of Turkish law, which means they could be at risk of being sent back to their countries of origin by Turkey. This means that the Greek authorities, by putting them into the situation of being rescued by the Turkish coast guard, participated in an "indirect refoulement" which is also prohibited by the ECHR.

The Greek authorities have repeatedly denied that such push-backs are taking place. In response to an investigation by Deutsche Welle at the end of June, the Greek coast guard said: "Amidst the coronavirus pandemic the country is confronted with 'massive' and 'organized migration flows' from Turkey. The coast guard further stated that it protects its European maritime border in accordance with national and international law and that any published accounts to the contrary stood in connection with 'fake news' and from 'intentional misinformation against this institution.'"

Frontex, which helps Greece patrol the borders, was also approached by Deutsche Welle. They "refrained from a direct response" to the accusations of illegal push-backs but said that they were "fully committed to uphold[ing] the highest standards of border control within our operations and push-backs are illegal under international law." 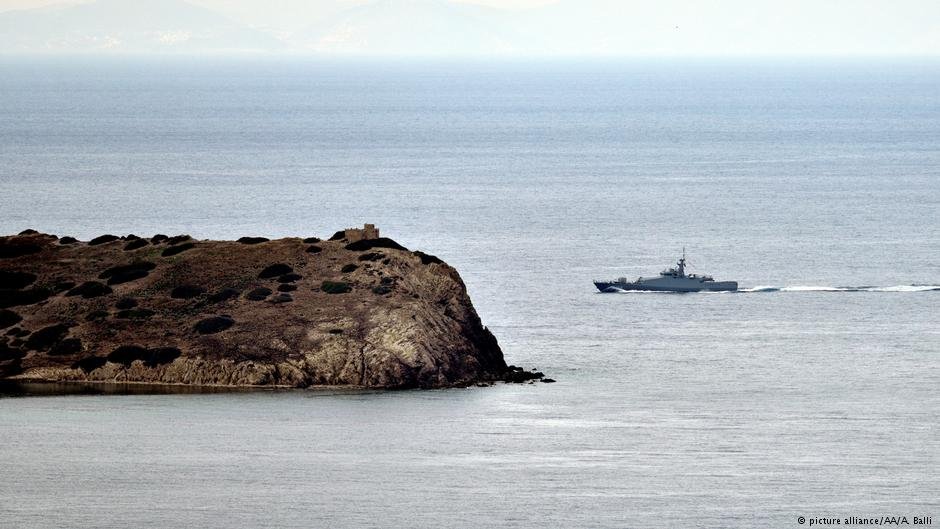 The DW article said that reports of these push-backs are "hard to prove," because "there are scarcely any photos or videos of the attacks, the masked men do not wear uniforms and their boats are unmarked." However, after analysis of a video from June 4 with the help of investigative platforms Bellingcat and Lighthouse Reports, they conclude they can "unequivocally match the rigid inflatable [pictured in the video] to a Hellenic coast guard ship."


The LCL says there is an "urgent" need to investigate these allegations and that "measures should be taken to immediately prevent collective expulsions" and to "protect and respect the human rights of all those under Greece's jurisdiction, whether at sea or on land."

Lorraine Leete, a lawyer and one of the coordinators of LCL said that these practices "showed the violence at the core of the European border regime and the disregard it had for human life." The press statement from the center added that these push-backs were being carried out "in plain view -- if not with the participation of the European Border Agency Frontex--" and therefore the European authorities are "complicit in these crimes as they have thus far failed to act to prevent further push-backs or hold Greek authorities accountable."