Search-and-rescue teams have retrieved two more bodies from a boat that sank last month on Lake Van in eastern Turkey, according to Turkish media reports. The boat is believed to have been carrying up to 60 migrants when it sank.

A total of 56 bodies have now been recovered after two more bodies were brought to land on Sunday, the Turkish news agency Demiroren reported on the same day. The boat had been reported missing in stormy weather on June 27.

The death toll of a refugees #boat that sank nearly three weeks ago in Lake #Van in south-eastern Turkey rose to 59.

The lake is near the border with #Iran, from where refugees regularly cross into #Turkey to head west towards #Europe. pic.twitter.com/AZTW0xmRWS

The wreck is lying 107 meters below the surface of Lake Van which at its deepest point is 450 meters deep.

According to media reports, there were up to 60 migrants -- who hailed from Pakistan, Afghanistan and Iran -- on the boat when it sank. No details were made available as to how the boat capsized.

News agency Reuters published a video on July 18, showing various stages of the recovery operation. The video shows underwater camera footage of the sunken boat and a dead body trapped on the boat’s deck, filmed on July 8. The video also show ambulance workers carrying body bags from police speedboats to shore on Saturday, July 18. According to news agency dpa, a total of nine bodies -- including the bodies of two children -- were retrieved that day. The video footage had been made available by the Turkish interior ministry.

Five people have been formally arrested in relation to the boat sinking, according to Reuters. When the accident was first reported in late June, Turkish Interior Minister Suleyman Soylu had announced that a total of 11 people had been detained in connection with the sinking. He had also announced that a local administrator had been removed from office for delaying reporting the accident. 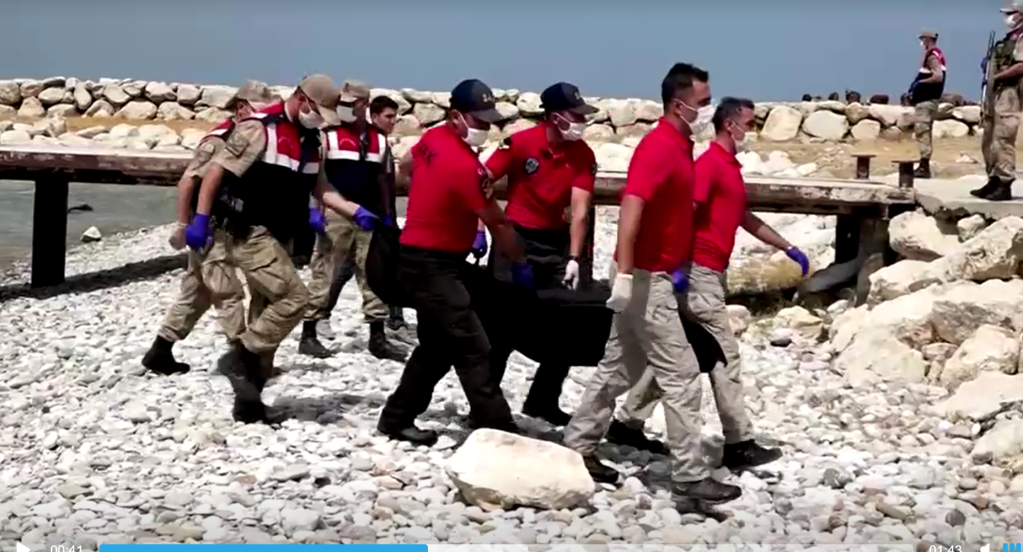 Lake Van is partially located in the provice of Bitlis and partially in the province Van, which borders Iran. Migrants from Iran, Afghanistan and other countries regularly cross into Turkey from there to head west towards Europe. People smugglers transport migrants across the lake to evade police and military checkpoints on nearby roads in the border region.

In December of last year, seven people died and 64 were rescued when a boat carrying migrants from Pakistan, Bangladesh and Afghanistan sank on Lake Van.

Turkey, which hosts about 3.7 million Syrian refugees, is a main crossing point for migrants trying to reach Europe. The Turkish online newspaper Hurriyet reports that since the start of the coronavirus outbreak, the number of irregular migrants arriving in Turkey has declined. However, the interior ministry says that more than 21,000 migrants and asylum seekers have reached Van so far this year. Soylu is quoted as saying that 16,000 were denied entry but 4,500 managed to enter Turkey illegally.
With AP, Reuters, dpa