In France, getting an appointment at the prefecture to apply for or renew a residence permit has become a near impossible task. The Defender of Rights has called on the interior ministry to take concrete measures to improve the situation.

In several prefectures in France, including the Seine-Saint-Denis prefecture in the Paris region, it is impossible to get an appointment to apply for or renew a residence permit, stated Cimade, an advocacy group for migrants and refugees in France. While this is one of the consequences of the COVID-19 pandemic, prefectural services have been overwhelmed even before the crisis started, and it was difficult to get an appointment to submit an application within the administrative time limits.

During lockdown, counter services at the prefecture were suspended. They were supposed to gradually restart in mid-June, but many prefectures have not resumed their services at all, according to Cimade, and "some open intermittently, others only offer slots from September (onward)," said Lise Faron, who is in charge of issues relating to the right to residency at Cimade.

'Entire nights trying to get an appointment'

Appointments are normally scheduled through the prefecture's website, but this is hardly possible, as Cimade has found. The group collected data with the help of a robot that tried to make appointments online, as would a person wishing to submit his or her file at the prefecture. 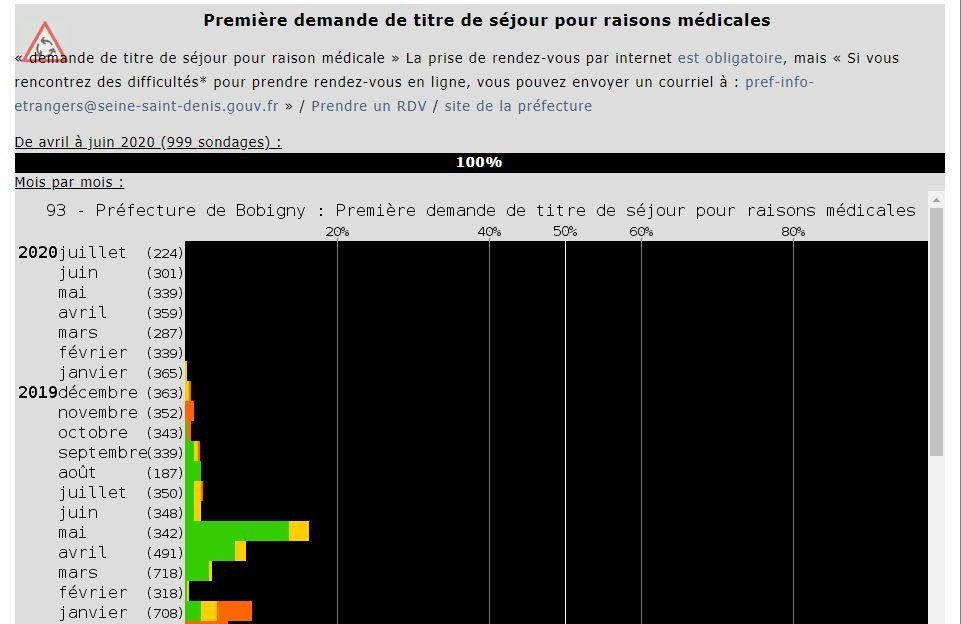 "There are people who spend entire nights trying to get an appointment, and that can last for weeks," Cimade reported. "This extremely complex situation leaves thousands of people in precarious situations," the organization warned, calling for a simplification of the rules governing access to residence.

Take a screenshot if the attempt fails

Cimade is particularly concerned for unaccompanied foreign minors who must apply for a residence permit when they reach the age of majority. These young adults are obliged to sumbit their application for a residence permit before their 19th birthday, or else they risk years of administrative procedures for becoming "undocumented".

What happens if they don't get an appointment at the prefecture in time? "Either the prefectures will show understanding, or these young people will receive a 'refusal to stay', in which case they will have to litigate," Faron said. She recommends that anyone who doesn't manage to book an appointment online to take a photo of the telephone or computer screen to prove that it is impossible.

Many foreigners who encountered difficulties due to the virtual procedures set up by the prefectures filed a complaint with Jacques Toubon, the Defender of Rights (an independent authority to ensure rights and freedoms, ed. note). In response, he issued a statement on July 10 and included a list of recommendations to the French interior ministry.

The Defender of Rights stressed the need to offer a sufficient number of appointment slots within a period not exceeding two months and to offer alternatives to online appointment scheduling. He urged the government to provide additional financial resources in order to be able to implement these measures.

In another warning, he reminded the government that people applying for residence in France are "users of the public service for whom the prefecture must respect the principles of adaptability, continuity and equality." Changing over to virtual access to prefectures is "a source of discrimination and infringement of rights", he added.

The ministry has three months to report back to the recommendations.