In the aftermath of a coronavirus testing scandal in Dhaka, Bangladeshis living in Rome have reported a change in attitude towards their community. Some say they have become stigmatized as "viral bombs."

Rakib Hasan, 25, has lived in Rome for several years and calls Italy home. Standing in a queue in front of a Roman hospital, Hasan tells DW how Bangladesh's fake negative coronavirus certificates scandal has complicated matters for many Bangladeshi migrants in Italy, including himself.

"I haven't visited Bangladesh recently. However, the owner of the restaurant where I work in Rome asked me to get tested for the coronavirus. It's compulsory now," said Hasan, adding that he feels ashamed of the recent scam that has cast a shadow over the Bangladeshi community in the Mediterranean country.

Mohammad Shahed, a Bangladeshi hospital owner and a member of the ruling Awami League party, was accused of issuing thousands of fake negative COVID-19 test results to patients at his two clinics in exchange for money. Last Wednesday, he was arrested while trying to flee to India disguised in a burqa.

Shahed, along with a dozen others, was detained by authorities in connection with the scam. Shahed's hospitals allegedly carried out 10,500 COVID-19 tests, out of which 4,200 were legitimate and the remaining 6,300 test reports were given without even conducting tests.

Dhaka police Commissioner Abdul Baten said Shahed admitted after his arrest that his clinics did not possess the proper equipment to conduct coronavirus tests.

Some of Shahed's patients then returned to Europe with the fraudulent certificates, only to be tested positive with the virus upon arrival in Rome.

On July 6, Italian authorities found 21 of 225 passengers on a flight from Dhaka to have the coronavirus. More passengers later tested positive, bringing the figure to 48. Some of them possessed certificates for a negative COVID-19 test from Dhaka, according to media reports.

Italian authorities later denied entry to another flight from Bangladesh and imposed an entry ban on non-Schengen countries, including Bangladesh, until July 31. 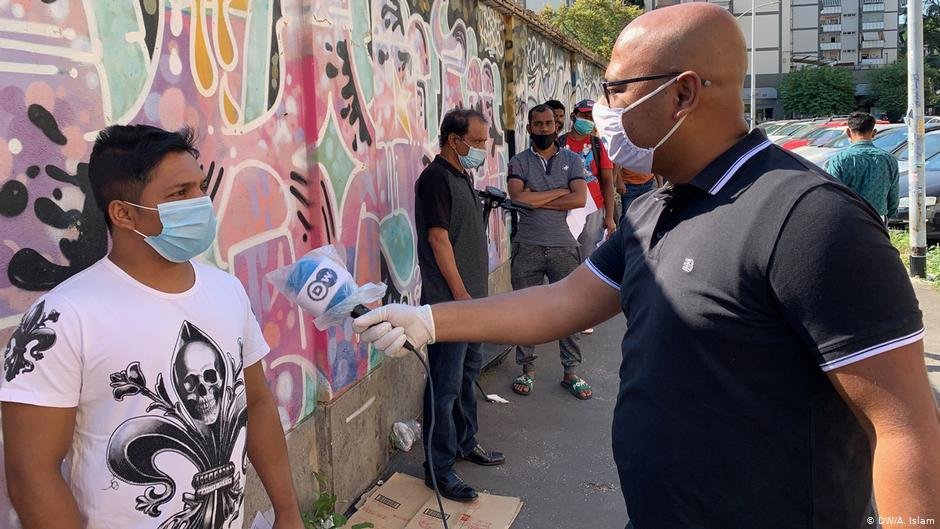 More than 100,000 Bangladeshis reside legally in Italy and over 30,000 of them are based in the capital, according to Italian national statistics institute ISTAT. Bangladeshi government officials estimate that a further 45,000 reside in Italy illegally.

Many of the migrants work in tourism, catering, and agriculture sectors and thousands are enrolled in educational institutes.

The suspected scams could have serious implications for Bangladeshi migrant workers seeking to work abroad and whose remittances form a vital part of Bangladesh's economy, migrant rights groups have warned.

Last year alone, almost $19 billion (€16.4 billion) was sent back to Bangladesh by an estimated 12 million migrant workers, according to the central bank.

"We are facing an image crisis in Italy right now, and we are responsible for it," Mohammad Habib, who has been living in Italy for 13 years, told DW.

Iqbal Ahmed, Bangladesh's consulate general in Milan, told DW: "150 out of 1,600 Bangladeshi passengers returned to Italy from Dhaka on six chartered flights, and recently tested coronavirus positive." He added, "Some others have been infected after coming in contact with them. The infection rate is so high that it grabbed the attention of mainstream media and health authorities."

In addition, Ahmed said displaying a negative coronavirus certificate from Bangladesh was not even mandatory at the time, but that "some of them willingly brought those certificates."

Since then, a number of Bangladeshis living in Rome reported a change in attitude towards their community, claiming Bangladeshis have become stigmatized as "viral bombs."

The Italian health authority asked all Bangladeshi expatriates living in Rome to test for the coronavirus, free of charge.

"More than 7,000 Bangladeshi migrants have already submitted samples for the coronavirus test at the hospital," said Mohammad Jasim, who has been working as a volunteer to help Bangladeshis gain access to testing. "Some of them were found positive, although I don't know the exact figure," he told DW.

Read more: Coronavirus: Economy down, poverty up in Bangladesh

Meanwhile, Mohammad Russel Mia, a Bangladeshi expat who returned from Dhaka on July 1, is of the view that some Bangladeshis ignored coronavirus rules after returning to Rome, triggering new outbreaks among the Bangladeshi community.

"We were asked to self-quarantine at home for two weeks after returning to Rome from Dhaka. I have followed the rule, but many others haven't," he said, adding, "Some of us have ignored government instructions and we are now paying the price of it."

"Bangladesh and Italy have a friendly relationship. Nothing has damaged it recently," Sikder told DW, adding: "Italians like Bangladeshi migrants. I don't see any image crisis here."

"Italians know that Bangladeshi migrants came here to work. They work to feed their families, and don't get involved in criminal activities," he told DW. "That's why they are not against Bangladeshi expats," he added. According to Zannini, anxiety over the virus has been directed at foreigners in general.

"They [Italians] avoided going to Chinese restaurants when the virus started to spread earlier this year. Some people talked poorly of China at the time. However, I haven't heard any such thing against Bangladeshi people recently," he said.

Migrants with Italian residency and work permits currently visiting Bangladesh are banned from Italy until July 31. However, some are anxious authorities might extend the ban for another few weeks.