150 volunteers from around Europe have signed up to a summer holiday with a difference. Via the Catholic charity Sant'Egidio, volunteers are working with migrants on the Greek island of Lesbos, providing entertainment for children and working in a restaurant run by the charity. Through the work, the charity identifies families eligible for relocation via humanitarian corridor.

Not far from the sea, in an old brick olive press on the Greek island of Lesbos, the Catholic charity Sant'Egidio is breathing new life into a dusty building by offering a variety of activities to help migrants who have been living in and around the Moria camp, some of them for a number of years.

"Our work is about solidarity," says Daniela Pompei who is in charge of making sure everything runs smoothly for the migrants and volunteers on Lesbos. "Things were very difficult during lockdown, so starting up activities again after all those restrictions is very important for the migrants and asylum seekers there."

As well as running activities, Pompei's team works with various governments including Italy, France, Germany and the Republic of San Marino in order to identify particularly vulnerable migrants who might be candidates for the humanitarian corridors the charity has helped set up.

When Pompei spoke to InfoMigrants on August 11, she had just flown back from Lesbos the day before. She had been in Greece since the beginning of July, putting in place structures and welcoming the first shift of volunteers to start their "holiday with a difference. We call it an alternative holiday," giggles Pompei, "but you work very hard. All the volunteers pay for their own flights and hotels. Work starts at about 7am and goes on until about 8:30pm." 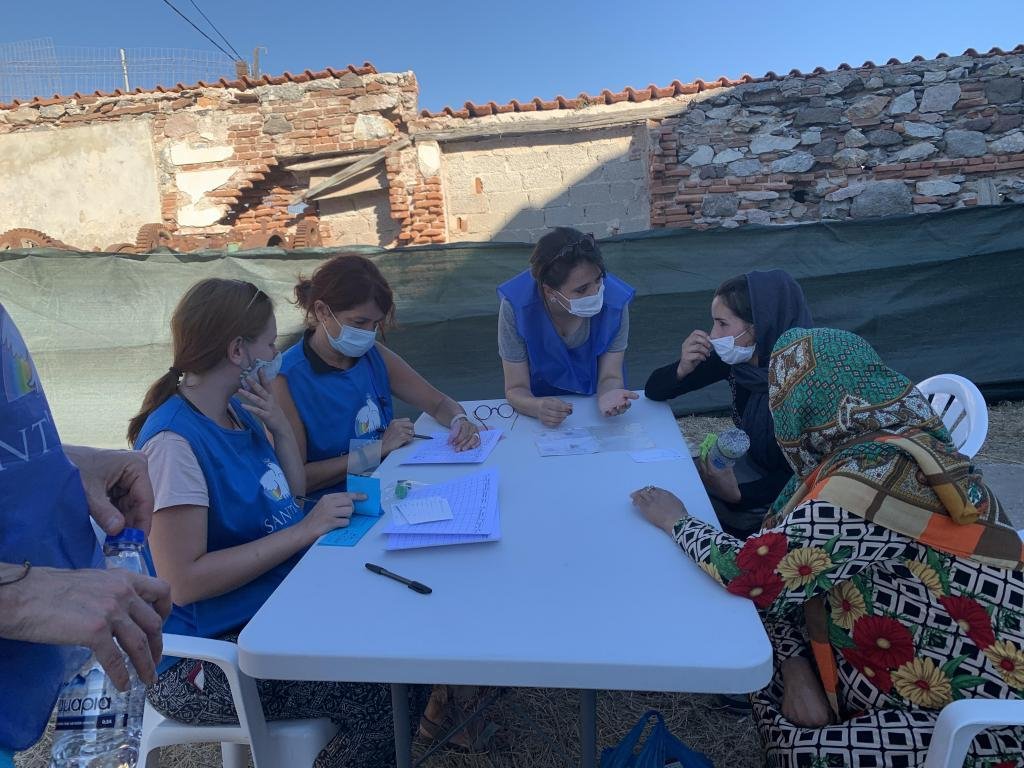 Throughout the conversation, Pompei's voice is warm and full of laughter. She explains that as people arrive at the restaurant that Sant'Egidio set up or participate in games, each person is registered and their stories start to emerge. "One of our main objectives is to find people who could really benefit by being transferred via humanitarian corridor to Italy, France or Germany."

Waiting for a flight to Germany

Pompei's voice lifts still further with pleasure when she explains that "a small group of about 12 refugees" are already in Athens, waiting to fly to Munich and Berlin next week. "There are two unaccompanied children in the party and two family groups," she confirms. "The German government asked us to find particularly vulnerable individuals."

Back on the island, at the beginning of August, the charity opened up a restaurant in the building and on August 10, an English school started during the day.

According to Sant'Egidio, the school, where lessons are taught in English, had 32 people sign up before it had even opened. "Word got round quickly," the charity states on its website and the teachers prepared spaces for 50 just in case. In the end, on the first day about 82 students turned up. "It was just beautiful," says Pompei recalling the day. "The youngest 'pupil' was just eight months old, he arrived with his mum, brothers and sisters to 'listen' to the lesson; the oldest was about 42." One student came from Congo, another from Togo and the rest were Afghan. The teachers came from Poland, Italy and Catalonia. Lessons started with learning the alphabet in English. The students painstakingly copied down their first English words: "This is the English school of friendship," wrote the teacher. For some, say the charity's organizers, this is the first time they have ever attended school. "There is a huge need for one in the camp," they clarify.

'A sea of children'

Pompei has been back and forth from Rome to Lesbos for the charity since 2016 when Pope Francis visited the island and announced that he hoped to take back some unaccompanied children to the Vatican via the humanitarian corridor. Sant'Egidio and Pompei, who is also a professor of social sciences at the University of Roma Tre (Three) and in charge of Sant'Egidio's immigration services, language school, refugee assistance and welcome center, were drafted in to help.

"What really hits you when you arrive in Moria is this huge sea of children," Pompei explains. She admits that returning to Moria in 2019 was still a shock. "The conditions had really deteriorated. The camps were awful. There were hardly any showers, a scarcity of water, even if there is water available on the island, the hygiene provisions were terrible. There was a real sense of a lack of hope." 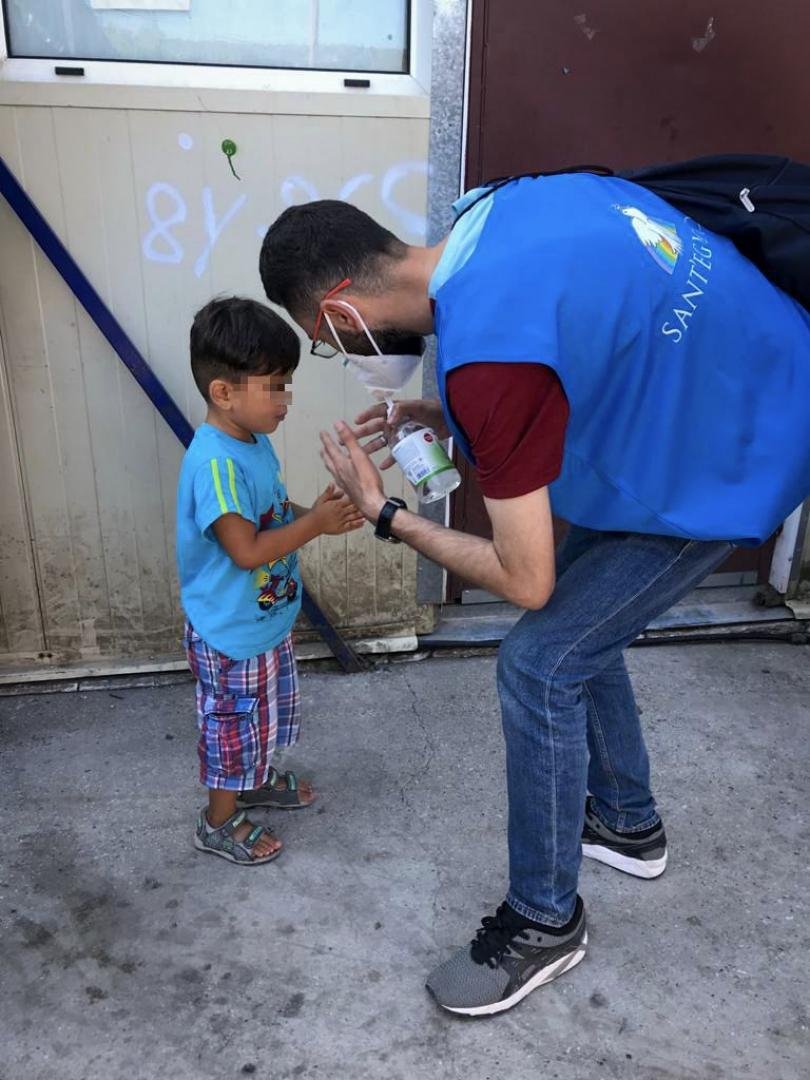 Pompei talks about a "collective depression," which has settled on most inhabitants of the camp. "It is sad," she agrees. But, seeing the conditions and all the children living there just galvanized Pompei still further. "It makes you want to do something to help," she says. You can hear her smiling broadly as she recalls the "wonderful response" her team gets from most migrants and refugees. "People are so grateful and that is lovely," she says.

As well as distributing warmth to migrants and refugees, Pompei is involved in diplomacy at the highest levels. She and her team negotiate with governments and also try and improve relationships between the Greek residents of Lesbos and the migrant community. "You can imagine," Pompei says, "there are about 3,000 permanent residents in Mytilene and more than 15,000 in the camps. The local residents feel terrorized sometimes and they feel forgotten by everyone, by Europe."

Sant'Egidio makes it a priority to distribute food, help and comfort to alleviate local poverty too. Pompei admits that some islanders think that groups like hers end up attracting more migrants, "but that is just not true," says Pompei, laughing heartily. "We are trying to fly them out!" Becoming more serious though, Pompei admits that there is "a wind of hate blowing through the island" and that it would be silly to "gloss over the problems."

Pompei thinks that their work helps spread hope. "There is just no hope present in the camp. That lack of hope creates problems and vulnerabilities for some." Although Pompei admits that the situation is "complicated and huge," she thinks that even small steps can move mountains. "Of course, sometimes you feel this hopelessness and that the situation is too huge to solve, but it is important to do something even if it is small." 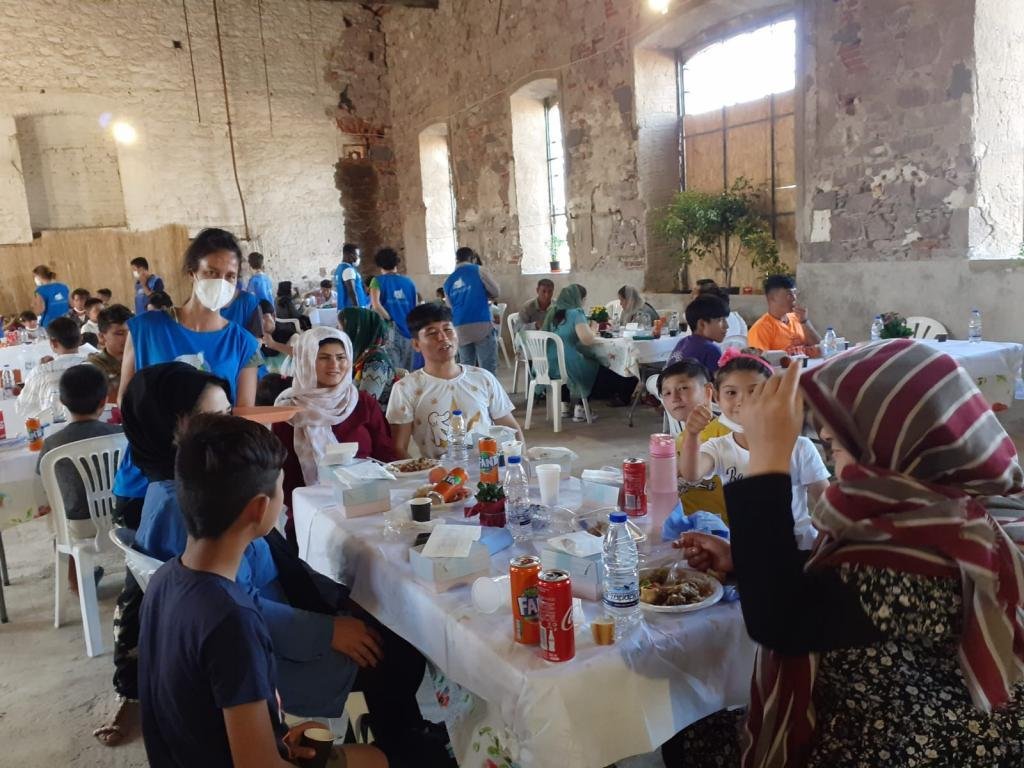 Small steps like making sure the children have a sweet or a lolly to lick. A small treat can "really change their situation," says Pompei. Or making sure that if they are invited to the restaurant, migrants have the chance to sit down together around a table. "A bottle of cola or fizzy orange on the table during the evening meal just makes people feel better," she thinks. "In a sea of difficulties and dust, there is suddenly a little light. Then you have to keep fanning these tiny flames of hope […] so that things change slowly but surely."

The restaurant also provides "a moment of calm for people," thinks Pompei. "In the camp they have to sit on the floor all the time, so it is really important that they can sit with their families around a table." The team of volunteers hand out invitations in the morning. "The first day we opened we tried to invite Muslim families so they could celebrate Eid-Al-Adha. So we prepared lamb which is what they traditionally eat for that festival, and vegetables and deserts for everyone."

Volunteers hand out between 250 and 300 invites "but always more turn up," laughs Pompei. She sounds like she has boundless energy. On Saturdays, the group takes migrants on tours of the island, to local beauty spots, to appreciate what is around them and give them an alternative perspective from the camp. On Sundays, they hold mass for anyone who wants to come and then a trip to a local restaurant.

"People quickly learn the names of the volunteers and it can be beautiful as you have huge groups of children calling out your name," says Pompei. It is often the children who will ask for a restaurant table for their whole family.

At the moment, the second shift of volunteers has just begun. This cohort come mostly from Poland, Sweden, Spain and Italy. The first shift also had Germans and Dutch people present too. "On the last shift, which just left, we had a Syrian refugee called Mohammed, who has been in Germany for some years," explains Pompei. She particularly likes it when refugees come back to help. "We've had a Syrian Kurdish volunteer too and an Afghan lad who is now living in Italy." These volunteers are particularly helpful for communication between migrants and the other Sant’Egidio volunteers. 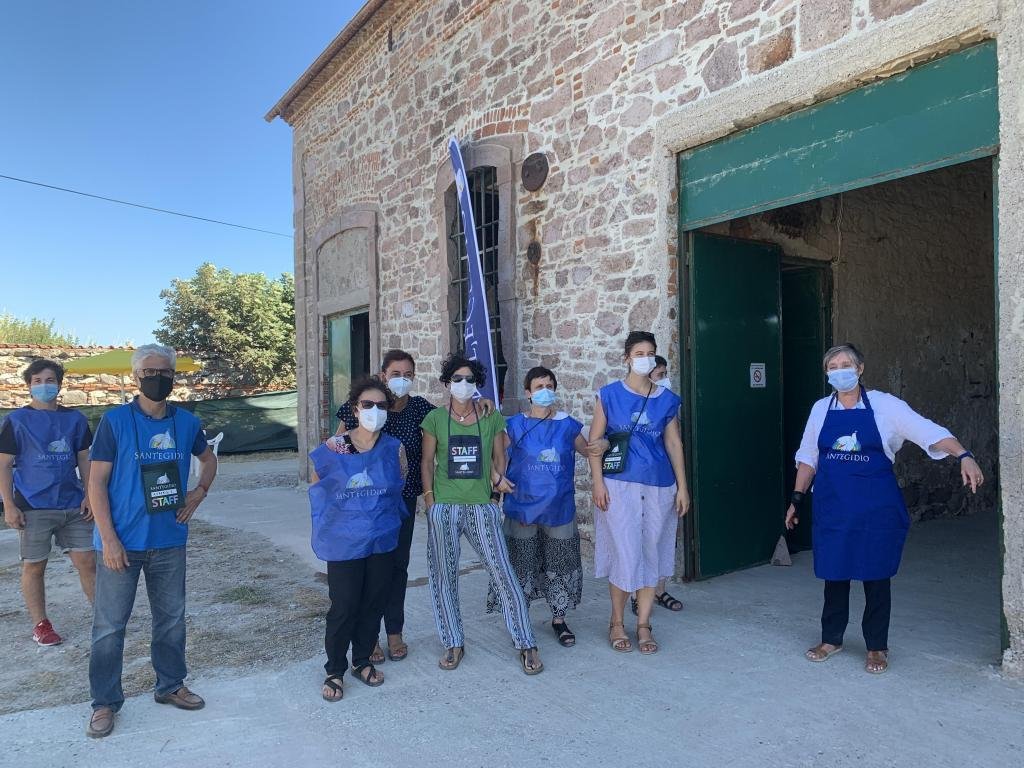 Angelika Wagner was in the first shift on the island this year. She spoke to the Catholic news agency KNA about her experiences. Wagner is a religious teacher working in Würzburg most of the year. Last year she worked on the island too and says that the restrictions due to the COVID-19 pandemic made things more difficult this year -- especially in terms of communication as the mask hides some facial expressions which volunteers use in place of language sometimes.

Wagner too is particularly moved by the children. She told KNA, "in the camps there is nothing for small children to do. Some of them have even forgotten how to smile." Wagner adds that through the play offered by the volunteers, the children "are able to be children once again. It is unbelievable how happy they are once they are playing."

Pompei explains that people of all generations come and help. Sometimes whole families arrive . One 15-year-old who came with his family confided to her that it was "the best summer holiday he had ever had," Pompei says proudly. She thinks young people are the key to building a new, different Europe.

She tells the story of a group of young people from Naples who spent last Christmas helping on Lesbos. They made friends with an Afghan family and at the end of the trip, they wanted to take this family back to Naples with them. I told them that they needed to find a flat for them to rent and raise enough money to support the family and assist their integration. If they could do that, I promised I would start negotiations. "And do you know?" says Pompei. "This July, that family flew to Naples."

"That group found the means to help them and they are now starting a new life in Naples." If you tend to think things are impossible, says Pompei, then you would never do anything. "It is necessary to dream, and then you have to make that dream become a reality."

It is all about a series of small steps, thinks Pompei. "You have to work with the laws and study how you can complete the process properly. We might be dreamers," she admits, "but we are not naive. We dream, and then we make sure those dreams actually happen."