Crafting a future for refugees

When refugees flee, they often arrive in their host country with very little to their name. But one thing that can’t be taken away from them are their skills and traditions. That is why craft can play such an important role in providing employment, self esteem and a path to a brighter future.

"What I earn every month, it helps me a lot," says Claudette*, one of the refugee women who has found employment in the Love Welcomes weaving workshop near Athens. "I have a kid, and I do take care of my son right now. Before, I couldn’t," she concludes with a smile, pushing the shuttle on her loom back and forth.

Claudette says that she was forced to flee her country because her life had been made hell. She says she was sold to her uncle's wife when she was just one year and eight months, and that her life had always been "full of endurance." When she arrived, she says she was alone, but gradually, she has made friends along the way. 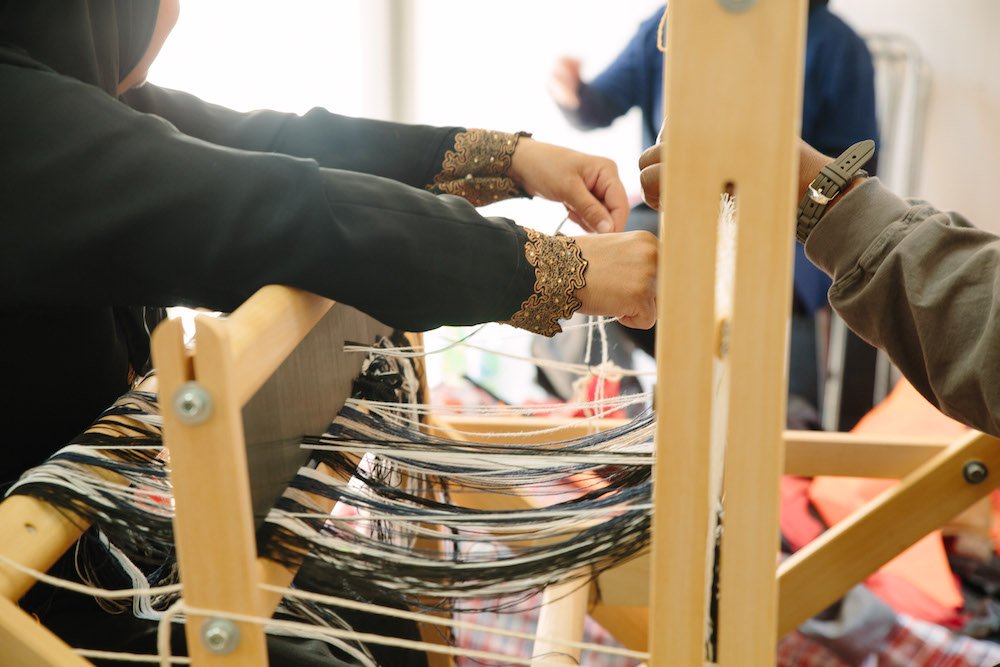 Love Welcomes works with refugee women like Claudette in Greece. It was founded in 2017 by Abi Hewitt and several other women. Abi is a social entrepreneur and tries to find a market for goods made with a social conscience. "Everything we sell benefits women fleeing violence and poverty," the website states.

Abi Hewitt spoke to InfoMigrants by phone from London. When she started Love Welcomes, she explains, she had been working for an organization in America, Thistle Farms, that was "employing and rehabilitating women coming out of sexual violence, drug addiction and the prison system."

As the numbers of refugees arriving in Greece were increasing rapidly, Hewitt thought that "providing something for them to do every day, and providing employment, empowerment and learning was key for the women to recover from their traumas and regain a sense of worth."

Hewitt acknowledges that there were many charities working to help migrants and refugees at the peak of their "survival mode" as they arrived. But she wanted to offer something for those who had been there a while and had received refugee status, but who were still contemplating a future with very few prospects ahead.

"The thing I was most struck by on visiting Greece at the time was the amount of sheer boredom," remembers Hewitt. "People had been living in refugee camps for at least three years by the time they arrived at this camp near Athens. There was no reason to wake up in the morning, there was no direction to the day, no direction in life. There was no reason for people to engage in their own life. So we set about creating a workplace and skills training center for refugee women."

From the beginning, says Hewitt, the women were very keen to participate. When they first set up, they were adamant that they shouldn’t "start something and just disappear," Hewitt adds. The women who were involved from the beginning also felt it was very important that it remained female only. They also asked the organization to finance other services in the camps so that it wouldn’t just benefit the women who were directly working in the workshops. 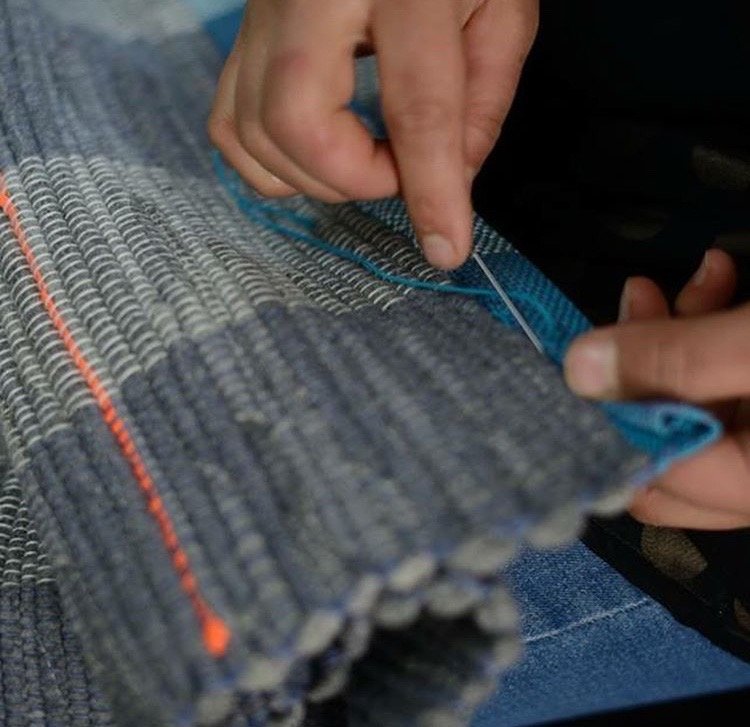 Claudette heard about the project through a mentor who works with Love welcomes. She gets involved in all aspects of making the projects, from cutting up blankets and life jackets to weaving, sewing and knitting. "The money is really helpful to me," she explains. "It enables me to buy medicines, take care of my son, give a hand to support others less privileged and generally helps our life in the camp. For instance, I can use the money to pay the bus fare to go for appointments or buy foodstuff."

Another issue they faced from the women initially is that the organization wanted to upcycle the discarded lifejackets that were littering the shores of the Greek islands. For many, the lifejackets reminded them too much of the times when they had been most desperate, at sea on overcrowded boats.

"Our vision was to reclaim the lifejackets and create a future out of something which was so contentious. Now it feels something quite therapeutic to the women. Learning new skills and taking part in the community, being able to pay for food for their children and have a choice over the kinds of food they buy is, for many, a huge relief."

The women work on average four hours a day at the workshop. Every woman that works with Love Welcomes is "the main wage earner in her family group," explains Hewitt.

Since they began, they have celebrated the relocation of 38 women to other places in Europe. "Earning that salary has often enabled them to make that transition to another country," says Hewitt, whose group provides access to lawyers to help them figure out how they might get on to a relocation program.

Their product line started with a doormat made from the upcycled life vests and blankets which are no longer viable to keep people warm. The project gives new blankets to the community for every one they use in their mats. 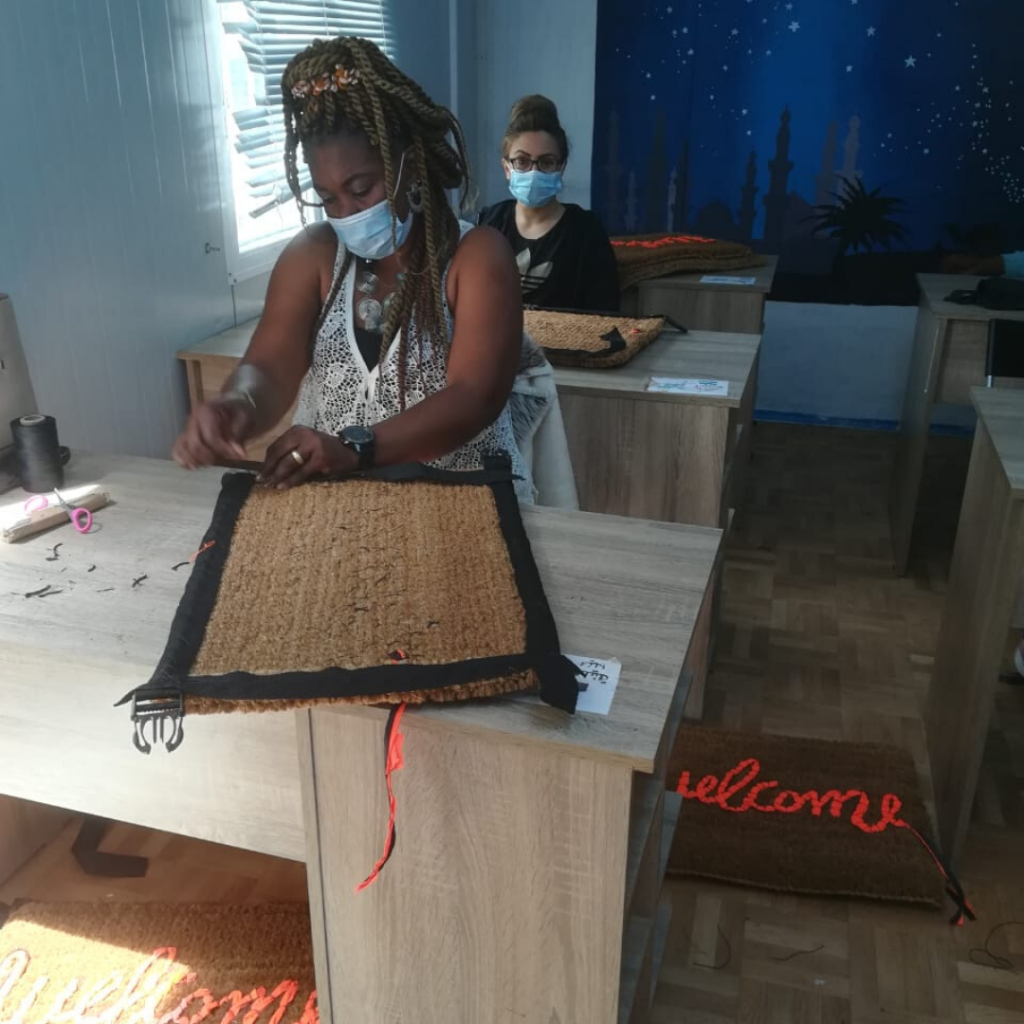 "It is much more than a mat," says Hewitt passionately. "It's a statement. It's a welcome mat not a doormat. The whole idea of what we do is to welcome refugees, even if our governments aren’t necessarily. So it is a way for people to show welcome to refugees even if they physically can’t. They can say to their community and friends, I welcome refugees."

They still stock the original welcome mats and have just started offering a limited edition mat designed by the anonymous England-based street artist Banksy, which has a waiting list of thousands.

'A sense of lethargy'

Before lockdown, Hewitt would visit Greece "about every six to eight weeks." So she has seen how the situation has evolved in the camps over several years. What struck her four years ago was a feeling of "lethargy" in the camps. "It was like an understood sense of nothingness. They were trying to make their lives as good as they could for their children but there was no drive towards anything because there was nothing to drive towards."

The model of Love Welcomes is based on the women teaching each others their skills. “The whole project relies on this exchange of skills. Some people learned the skills initially and quickly made it into something which works for them. Then they pass that on to the next woman. It is a peer-to-peer learning scenario.”

As Love Welcomes has proved it is enduring, there is more and more interest in joining the project. They are starting to change their model too. At the moment they can only employ refugees who are actually allowed to work but they are looking at being able to offer workshops to teach the skills even to people who can't work. "Doing something with your hands and in community with other people is cathartic and helpful for trauma recovery. Women need to talk about what they have seen and support each other, that is vital in refugee camps. This building community and getting to know each other and sharing what they have gone through and knowing that there are people around who are friends is vital, in all sorts of life."

'I want to experience a good life'

Claudette agrees. "It is very difficult to live in the camp because there’s no hope," she explains. "I have witnessed some really critical situations, people are really traumatized here.” Claudette says she relies on god to maintain her sense of hope and says that all she wants is to “become a good citizen, experience a good life and find some stability, so that I can live like everyone else out there in society."

*Not her real name

**All refugee testimonies in this article were provided by the projects the women work for, they did not speak directly with InfoMigrants.