Life at a standstill in Malakasa migrant camp in Greece

Vulnerable migrants in the Malakasa camp north of Athens are being forced to live in poor conditions unable to register for asylum. One Gambian national who arrived in March has been telling InfoMigrants of frustration among residents.

Robert* is only 33 years old, but his life has practically ground to a halt. For the past six months, the Gambian has been at the Malakasa camp near Athens. Not long after he arrived, the camp went into full lockdown after a resident tested positive for coronavirus.

Also read: Greece's Malakasa migrant camp: What life is like during the coronavirus lockdown

Malakasa is divided into old and new sections. Robert is in Malakasa 2, a military facility alongside Malakasa 1. Both sites are officially run by the Greek authorities, with the support of the UN migration agency, IOM.

The migrants are accommodated in shipping containers and tents, which are extremely hot, and Robert worries they will not give enough protection in winter.

“The Red Cross is doing its best to provide medical services…The authorities gave us masks and soap.  (But) the food is extremely bad, so that we only take what they bring on Sundays and Wednesdays," he wrote to InfoMigrants.

“On Wednesday is chicken and rice. The other days it beans throughout. So people don't collect it. We are going hungry most of the time.

“We have told them to give us the money, we'll prepare our food. However we don't have any (cooking facilities) and they are preventing us from cooking because we are in military installation.

“Initially the IOM was in charge of the food and it was much better. The government cut costs, so IOM decided not to provide food with the money the government is spending on each migrant per day. It was ten euro but they reduced it to five euro.” 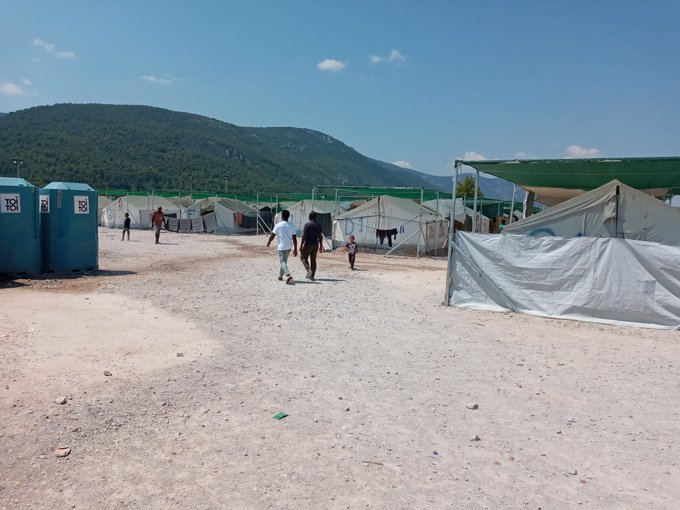 The other major challenge facing migrants in Malakasa is registration. When Robert contacted InfoMigrants he said the authorities had informed everyone in the camp that they had to arrange their own appointments to let the Greek Asylum Service (GAS) know that they wanted to apply for asylum. The way to do this was to call them via Skype, which should first be downloaded on their Smartphones.

They were told that they had to call in a certain time slot to a particular Skype ID. Which timeslot depends on what language you speak and whether you are in Thessaloniki, Athens or Crete (different procedures apply on the other Greek islands).

“This has prevented many people from making asylum claims. The day and hour allocated is not enough, e.g., French- and English-speaking migrants only have Wednesday 8 am to 9 am. The people are finding it difficult to lodge their asylum claims.

“It (is) really frustrating. Only few people know how to use the Internet. There are many vulnerable people here that need protection. I have tried for the third time to book an appointment through Skype but the line is busy. On Wednesday again l will have to try.”

Get help with pre-registration: https://www.mobileinfoteam.org/skype That was in July. By this week, three more Wednesdays had passed, and Robert has still been unable to get through. In late July he had not filled out a single form relating to the asylum process. Frustration is mounting, and migrants want action from the IOM.

“When l asked the IOM lawyer, she said the government is yet to take action on our case so if people want to apply for asylum let them book appointments through Skype. If the authorities will help us to lodge our asylum clam, then we'll find jobs, but as it is we are here waiting, with no statement from the authorities.

“As an organization giving services to migrants, what has (the IOM) done to persuade the migration ministry so that they can assign asylum staff to Malakasa camp to expedite our asylum process? This is becoming frustrating. It is almost six months since we arrived. Nothing has been done and there are vulnerable people here who need assistance.”

InfoMigrants put Robert’s question to the IOM, and received this response on July 24, 2020 from a spokesperson:

At the suggestion of the IOM spokesperson, we also put the question to the Greek Asylum Service, but received no reply.

Responding to the concerns about the Skype pre-registration system, the IOM spokesperson referred to an online self-registration application system launched by GAS in April.

The application is available in "all" languages and the IOM said it was ensuring Wi-Fi as well as on-site legal support. However, before submitting the full registration form online, you need to be pre-registered, with an “Asylum Precase Number,” which means it is still necessary to make a Skype appointment. We also asked the IOM about concerns with the food in Malakasa 1 and 2. The spokesperson confirmed that in Malakasa 2, catering is being provided by the Greek army. They added: