Migrants stranded at sea for more than 3 weeks

27 migrants who were rescued at sea in the Mediterranean have been stuck on a cargo ship off Malta for more than three weeks. Meanwhile, the private rescue ship Sea-Watch 4 is seeking a port for 201 migrants.

The cargo ship Etienne picked up the 27 migrants on August 4 after its crew was alerted to the distress call by migrant rescue organization Sea-Watch.

Since then, the tanker has been anchored off Malta and is waiting for permission to disembark the migrants. According to Sea-Watch, this is the "longest stand-off in history."

In a video statement, the captain of animal cargo vessel MV Talia, which in early July rescued 52 people and was stranded off Malta for five days, demands the Maltese authorities let the migrants disembark, calling the long waiting time "a scandal".

Mohammad Shaaban, captain of the #TALIA, asks Malta & European authorities to put an end to the longest stand-off in search & rescue history & let the people on board the #ETIENNE disembark. The TALIA rescued 52 people almost 2 months ago and wasn't allowed into port for 5 days. pic.twitter.com/AxQcyViFY9

The crew on board the Etienne has provided the migrants "with food, water and blankets and helped them as best they can," a statement by the Danish Shipping Company in charge of the Maersk Etienne tanker said. The ship, however, "is not built for passengers," the statement read, adding that there needed to be an international solution for stranded migrants.

The group of rescued migrants includes a child and a pregnant woman.

On August 28, five members of the European Parliament from different parties appealed in a statement to Maltese Prime Minister Robert Abela to assign a port of safety and to end the stand-off. "...[W]e are extremely worried about the current state on board and the condition of the rescuees. ... The people are deprived of their fundamental rights for three weeks now," they wrote.

A relative of one of the migrants on the ship has also put out a plea to the Maltese government to let the migrants disembark, published by Alarmphone, a support service for distress calls at sea.

The author, Said from Eritrea who lives in Germany, last spoke to his brother Osman before he left Libya on August 3 on a small boat. Said found out on August 20 that his brother was still alive and among the 27 people rescued by Etienne after seeing him in a photo.

"My relief has now given way to great concern. The refugees are still being held on the ship. I don't get any information about how my brother is doing. I am denied a telephone conversation with him. And I fear that the 27 people might get deported to Tunisia," Said writes.

A relative demands freedom for his brother now detained on the vessel #Etienne for 23 days. He writes: "Please, let my brother Osman and the other 26 refugees disembark in Malta, let them free!" #LetThemIn!https://t.co/hjSeniHh9J

Both Malta and Italy have repeatedly denied entry to ships with rescued migrants. The Mediterranean states argue that they bear the brunt of migrant sea arrivals and they demand a sharing mechanism across the European Union.

Their closed-port policy has hardened since the onset of the coronavirus pandemic, when many countries sealed land and sea borders. Politicians in Malta and Italy have cited concerns over migrants and a fear of infection, news agency dpa reports.

200 migrants waiting on board Sea-Watch 4

Meanwhile, the private rescue ship Sea-Watch 4 is located off the Sicilian coast waiting to be assigned a safe port to disembark 201 rescued migrants. According to Sea-Watch, which operates the Sea-Watch 4 together with Doctors Without Borders (MSF), the crew made requests to Malta and Italy, the safe states geographically closest to the rescue, on August 23. Malta has reportedly denied entry.
The 201 women, men and children were taken on board in three separate rescue operations between August 22 and 24. On Wednesday the Italian coast guard evacuated an injured boy from the ship who was suffering from severe fuel burns caused by a mix of salt water and engine fuel. 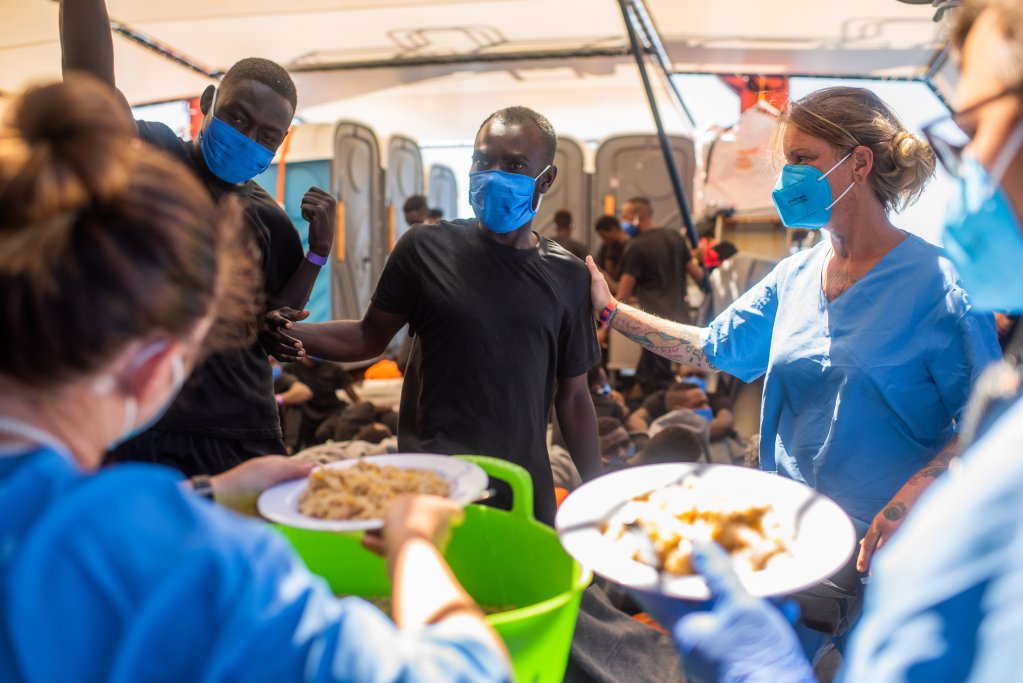 The MSF medical team treats people on board the ship and has already conducted 150 consultations, according to Sea-Watch. "Along with seasickness and dehydration, we have treated patients for recent injuries consistent with reports of abuse and torture in Libya, as well as trauma and burns sustained trying to cross the Mediterranean. And these are only the physical wounds; the wounds we can see," said Barbara Deck, MSF Medical Project Coordinator.

Sea-Watch is concerned that a prolonged state of limbo will worsen the migrants' condition. "Holding those rescued at sea in a state of protracted limbo puts untold psychological strain on already vulnerable people. It is unnecessary and inhumane. They have endured enough."