After close to two weeks at sea, Italy has allowed charity rescue ship Sea-Watch 4 to bring the over 350 migrants it has on board to Sicily. Meanwhile, the aunt of famous Syrian boy Alan Kurdi, who drowned in 2015 trying to reach Greece, pleaded not to "turn our back" on refugees.

The Italian port city of Palermo has given the humanitarian rescue vessel Sea-Watch 4 the green light to bring its 353 migrants to Sicily, the NGO said on Tuesday. The news comes after 11 days of back-and-forth over where to take them.

"Finally relief for survivors on board," the organization Sea-Watch said on Twitter. The ship can dock at Palermo as a "place of safety," where it is expected to arrive on Wednesday (September 2).

🔴BREAKING! Finally relief for survivors on board today! They have just been given the news they have a place of safety in #Palermo, Sicily; on the 11th day after the first #SeaWatch4 rescue in the #Mediterranean. The 353 people will first be transferred to a ship for quarantine. pic.twitter.com/q3dOm3k74q

According to Sea-Watch, the port was assigned to the ship "on the 11th day after the first rescue." Over 48 hours from August 22 to 24, German-flagged Sea-Watch 4 completed three separate rescue operations off the Libyan coast.

Over the weekend, the ship also took in around 150 people from the Louise Michel, a new migrant rescue vessel in the Mediterranean financed by street artist Banksy.

Sea-Watch 4 said they had asked for admission to disembark its rescuees in Italy and Malta. Before they can go ashore for good, the 353 migrants will be placed on an Italian ship to undergo a two-week "preventative quarantine" to prevent a potential spread of the coronavirus.

On August 26, the Italian coast guard evacuated an injured boy from the Sea-Watch 4 who was suffering from severe fuel burns caused by a mix of salt water and engine fuel.

The Sea-Watch 4 is joint initiative between United4Rescue, Sea-Watch and Doctors without Borders (MSF) that's supported by Germany's Protestant Church. It launched for its virst voyage from Spain in mid-August with the aim of helping shipwrecked migrants in the Mediterranean off the coast of Libya.

"Only with this public pressure can something about the situation change," he added.

'Don't turn your back on refugees'

Meanwhile, the aunt of Alan Kurdi, the three-year-old Syrian boy washed ashore in Turkey in 2015, on Tuesday called on the world not to ignore the plight of refugees. 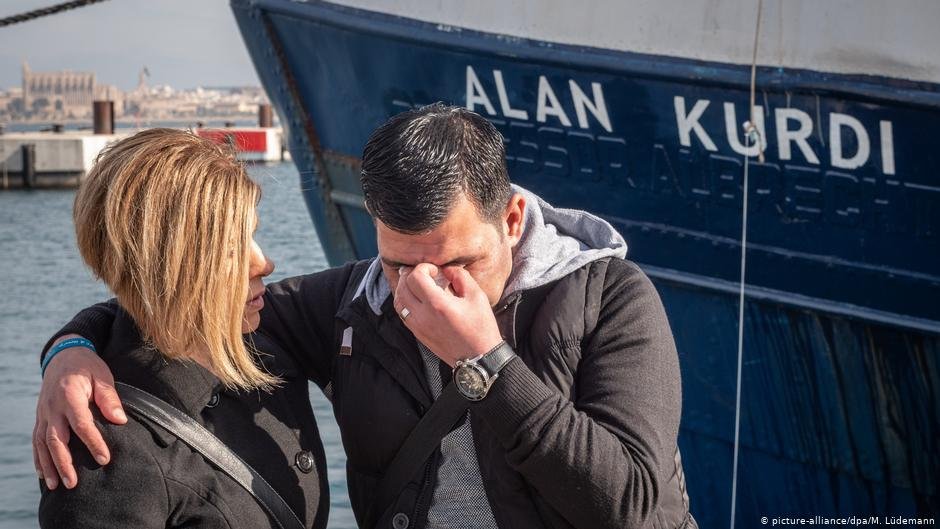 "We cannot close our eyes and turn our back and walk away from them," Tima Kurdi said at a press conference held by the German migrant rescue group Sea-Eye to mark five years since the boy's death.

"People all over the world continue to suffer and it's getting worse, not any better. And they are asking for help," Kurdi added.

Alan Kurdi drowned with at least four other people, including his brother Ghalib and mother Rehanna, on September 2, 2015 as they tried to reach the Greek island of Kos on their rubber boat. Only Alan Kurdi's father Abdullah survived the attempted crossing.

The heartbreaking photographs of the toddler's lifeless body lying face down in the sand near the Turkish resort of Bodrum quickly make global headlines, prompting international responses and sparking a flurry of donations for asylum seekers. Alan Kurdi's death has also become a global symbol of the plight of refugees at sea.

In 2019, German NGO Sea-Eye named its migrant rescue vessel Alan Kurdi after the Syrian boy. It has since helped save thousands of lives in the central Mediterranean.

On Tuesday (September 1), Sea-Eye announced it is also planning to send out a second rescue boat named after Ghalib Kurdi, Alan Kurdi's brother.

"The incidents of the last few days in the Mediterranean have shown that more rescue vessels that are fit for service are needed urgently," the Regensburg-based charity said on Twitter.

According to a statement on its website, Sea-Eye will deploy the new vessel "before the end of this year."

Since the start of this summer, the number of migrants arriving by sea from Tunisia and Libya to Italy has increased dramatically. Data by the Italian interior ministry and UNHCR show that close to 20,000 migrants have arrived in Italy via sea so far this year -- roughly four times as many as during the same time period last year. Over 40% were of Tunisian nationality.

In March, UN migration agency IOM estimated that the death toll of migrants who had tried to cross the Mediterranean Sea since 2014 passed the "grim milestone" of 20,000 deaths.