Informal settlement near Paris: 'Every morning, the police tell us to get out'

Roughly 300 migrants are camping out under the national highway in the Parisian suburb of Saint-Denis. Nearly every morning police officers order them to get out; and food distribution points keep getting pushed farther away from the heart of the French capital.

There’s anger written on the faces of the the men who have been living in a camp under the A1 highway bridge in the northern Parisian suburb of Saint-Denis.

Surrounded by highways and major city thoroughfares, the camp has no benches to sit on, no toilets, and only one water point for about 300 people. A single wooden chair has been placed in the middle of the camp, but no one seems to risk sitting on it.

Distributions further and further away

The camp right now has about 200 small tents, and every day, new ones are added. Volunteers from the French NGO Utopia 56 regularly visit the camp, which is inhabited by single men mostly hailing from Afghanistan.

By late morning, there are only about 50 people in the camp. The others have left to get something to eat or to try to find a way to contact the Office of Integration and Immigration (Ofii) whose single phone line for asylum seekers is unreachable this morning.

The further the migrant camps are from Paris, the more difficult it gets for people living there to access food and clothing distributions. From the Saint-Denis camp, migrants have to take the metro or walk almost an hour to reach the Saint-Ouen gate where the Salvation Army has moved its breakfast distribution since August 24.

Breakfasts are an opportunity to fill stomachs and get hot beverages – and also to enjoy the small comforts of tables and benches set up next to the distribution stand. Asylum seekers can also take stock of their situation with France Terre d'Asile, a migrant rights NGO, which has installed a mobile truck a little further away. Some members of Utopia 56 are also present to answer questions.

Gulkhan, 25, and Taher, 16, look a little lost. The two friends from Afghanistan arrived from Germany the day before and were directed to the Saint-Denis camp by a friend of a friend. Utopia 56 explains to them that Taher has to go for an evaluation in order to assert his minority status and be taken into the care of the Children's Welfare Agency (ASE). The teenager with thick black curls and most of his face hidden behind a mask does not seem to believe it.

Tonight, he will probably spend another night in the Saint-Denis camp with Gulkhan. Like all those unable to get a tent, the two Afghans will instead lie on a simple blanket on the ground next to the tents.

They are the ones the police try to evacuate every morning. Sometimes, the operation is muscular. Khan, a 23-year-old Afghan dressed in a military camouflage-print outfit, says that a week earlier, the police used tear gas to dislodge migrants here.

"The hardest part is that the police come every morning and tell us to get out," he says. "Sometimes, outside people also come and attack us or pick fights to steal our phones," he says. To try to protect themselves, the migrants in the camp now organize guard tours. 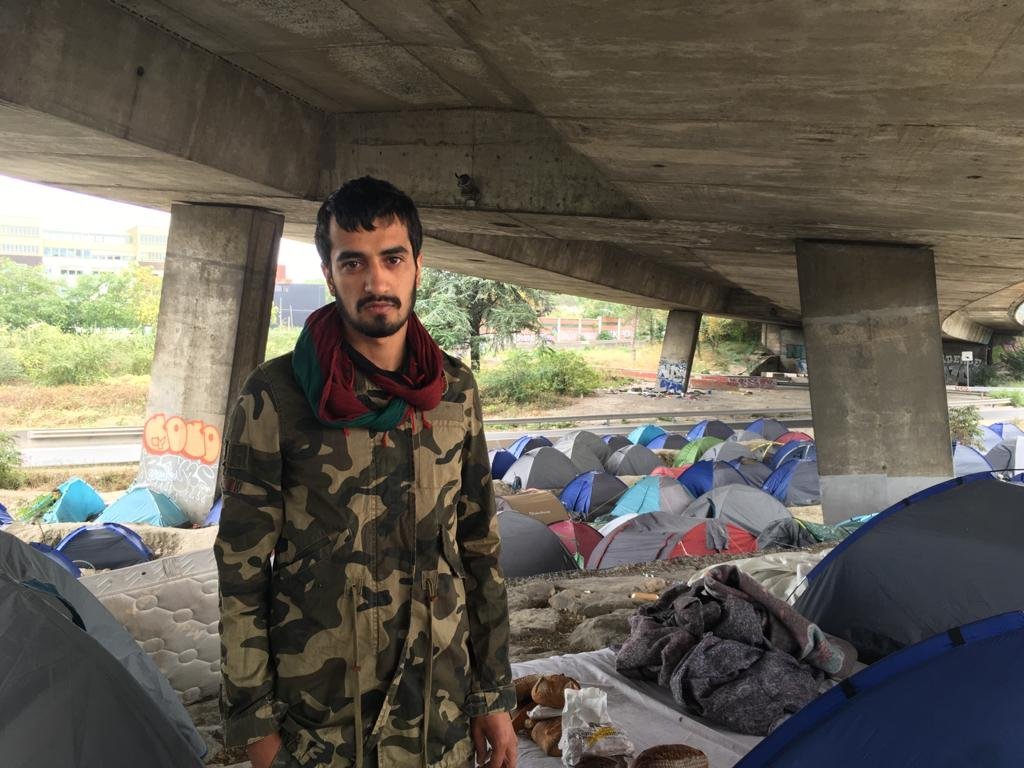 Khan has been living in the camp for about a month after police on July 29 evacuated a sprawling camp in the northern Parisian suburb of Aubervilliers. Having been denied asylum, Khan filed an appeal before the National Asylum Court (CNDA).

The Saint-Denis camp also includes newcomers and "Dublinés" (after the Dublin Regulation that determines asylum applications in the EU) who have spent months, even years, crisscrossing Europe in search of international protection that no country wants to grant them.

'Afghanistan is sinking, we have to flee'

When asked why they left home, many Afghans invariably have the same reaction: a slow, pained smile followed by an intake of breath before offering a simple explanation, as one migrant who declined to be identified put it: "Afghanistan is sinking, we have to flee".

Migrant aid associations regularly denounce the living conditions in the camps north of Paris and call for permanent accommodation solutions for asylum seekers.

"The street is a school of madness as well as indignity," warned Pierre Henry, director general of France Terre d'Asile, in a recent interview with InfoMigrants.

"We're waiting for the public authorities to think about a long-term solution," said Pierre Jothy, a social worker with Utopia 56, "If the only presence of the state for them is the police, who are always pushing them further away, that's not acceptable."

So far, the state's response has been to dismantle migrant camps with police pushing migrants further away from Paris and deeper into the suburbs. Evacuations follow one after the other, and the camps are re-formed. The camp at Saint-Denis under the A1 highway is likely to be no exception.