What next for former residents of Moria?

Following two nights of fires at the Greek migrant camp on the island of Lesbos, the authorities are providing temporary accommodation on board navy ships, ferries and in new tents being flown in. Thousands of the former residents spent the night sleeping on the roads and in fields with what few belongings they were able to save from the fires.

On Wednesday, the Greek Migration Minister Notis Mitarakis announced at a press conference that a passenger ferry, two navy boats and "some 3,500 tents" would provide temporary shelter for some of the former residents of Moria.

The German press agency dpa reported that the Blue Star Chios ferry arrived on Thursday morning offering "about 1,000 places" to migrants formerly resident in Moria. The navy ships are expected later on Thursday.

According to the news agency Agence France Presse (AFP) families and those in urgent need of protection will be first in line for new accommodation or places in the emergency provision.

407 unaccompanied minors present in the camp have already been transferred via three planes to the Greek mainland, after the EU Home Affairs Commissioner Ylva Johansson pledged EU money for this group.

After a long night at the @UNICEF Child and Family Support Hub, all 407 unaccompanied children have been safely transferred ✈️to the mainland. We would like to thank all front-line workers that successfully coordinated the emergency response. #AChildIsAChild

Johansson retweeted a statement by UN Children's Agency UNICEF saying that "after a long night at the UNICEF Child and Family Support Hub, all 407 unaccompanied children have been safely transferred to the mainland."

According to the English language Greek newspaper Ekahtimerini, the unaccompanied minors will be housed in "a camp in the north of the country." Moria 'will not be rebuilt'

Migration minister Mitarakis said that the Moria camp will not be rebuilt but will be replaced by a "closed facilitiy." Ekathimerini reported however that "he did not elaborate on when this would happen or who the new facility would house."

He told Greek broadcaster SKAI TV that plans to build new temporary camps on Lesbos were also "facing difficulty from local authorities and local society [over where to] put tents to house these people."

The UN Refugee Agency UNHCR’s chief Filippo Grandi tweeted that the UNHCR "continued to support the Greek government in assisting those made homeless by the Moria fire."

I spoke with Minister @GKoumoutsakos and assured him of UNHCR’s continued support to the Greek government in assisting those made homeless by the Moria fire. We are dispatching relief items for 12,000 people and are ready to help with temporary shelter and longer term solutions. pic.twitter.com/MCvQ9qTU01

He added that UNHCR was "dispatching relief items for 12,000 people and are ready to hellp with temporary shelter and longer term solutions."

After 35 people tested positive for the coronavirus earlier this week, some on the island are scared that those infected could now have left isolation and potentially infect other people. According to AFP, Greece's public health authority confirmed on Thursday that only eight out of the 35 positive cases had "been located and isolated along with a significant number of their close contacts." The whereabouts of the others has not yet been reported.

'Coalition of the willing'

Several EU leaders, the heads of some German states and religious leaders have proposed trying to find places for the more than 12,000 inhabitants of Moria across Europe in their own countries in the coming days, weeks or months. However, the presidents of German states cannot offer places without the the green light from the federal government which is, for now, sticking to the original guidelines it set down regarding migration and insists it cannot take everyone alone.

Some politicians in Germany’s ruling conservative coalition, including the CDU's Mathias Middelberg, told national broadcaster ZDF that it was important that Germany did not go it alone this time as that would send out the wrong signal to the rest of Europe and allow others to sit back. Instead, he urged a "coalition of the willing" to come forward from across the EU to offer places to the people who had lost a place to sleep in Moria. 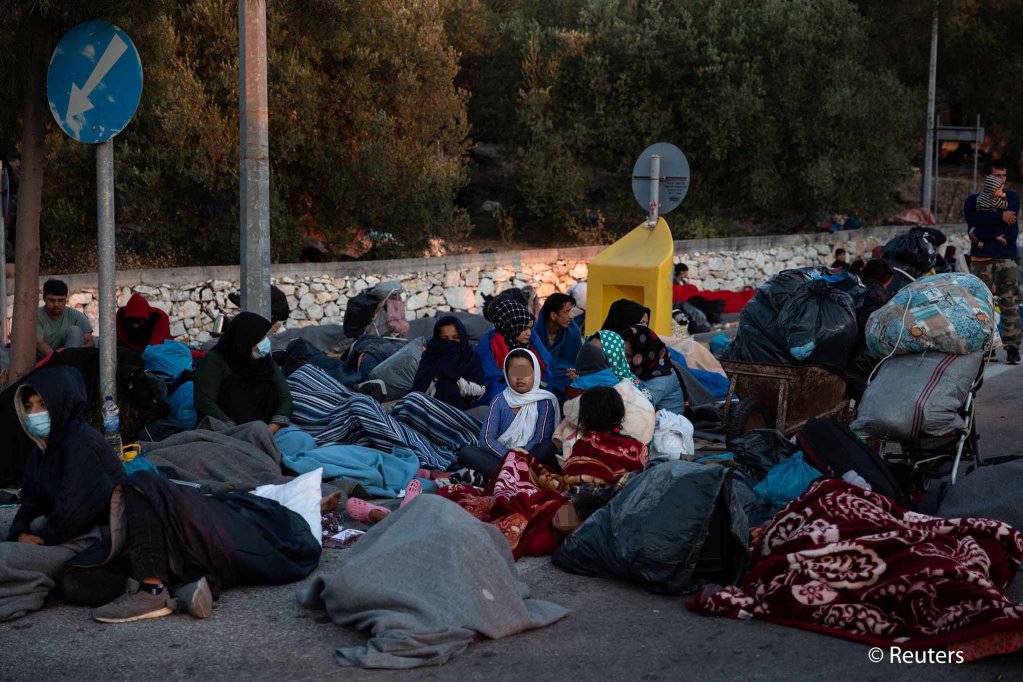 According to dpa, France and Germany are working on a joint proposal which would involve "a maximum of European countries."

'Blackmailing tactics will not be accepted'

The Greek deputy migration minister Giorgos Koumoutsakos however told Greek broadcaster SKAI that most adults could not expect to be taken off Lesbos immediately. According to dpa, he said to SKAI: "Whoever thinks he can go to the mainland and then travel on to Germany should forget it."

The migration ministry believes that the fire was started by arsonists and he underlined that "blackmailing tactics will not be accepted."

Commissioner Johansson tweeted that the "spirit of [EU] solidarity [would be] needed in the coming days."

Medics from the World Health Organization WHO are due to start testing both asylum seekers and locals for the coronavirus on Thursday.