The situation on the Greek island of Lesbos is tense, as migrants and refugees remain stranded. Athens is now trying to pour oil on troubled waters, but things have long since gotten out of control.

"I don't want to go into the new camp. I want to leave Lesbos," says Reza, a young man from Afghanistan who speaks good English. Like thousands of other migrants and refugees, he is staying on the coastal road between the island's capital, Mytilini, and the small village of Panagiouda, picturesquely situated on a bay lined with cafes and restaurants.

On the other side of the bay, rows of tents can be seen. Since Saturday, the Greek government, together with the UN refugee agency UNHCR, has been setting up a temporary camp on a former military training ground. Some 500 of the people made homeless by the recent fires in the Moria migrant camp have already moved in. Soon, there is meant to be enough room for all of them. "I feel safer here," says a Syrian man who is among the first migrants and refugees to voluntarily go to the new, temporary site. 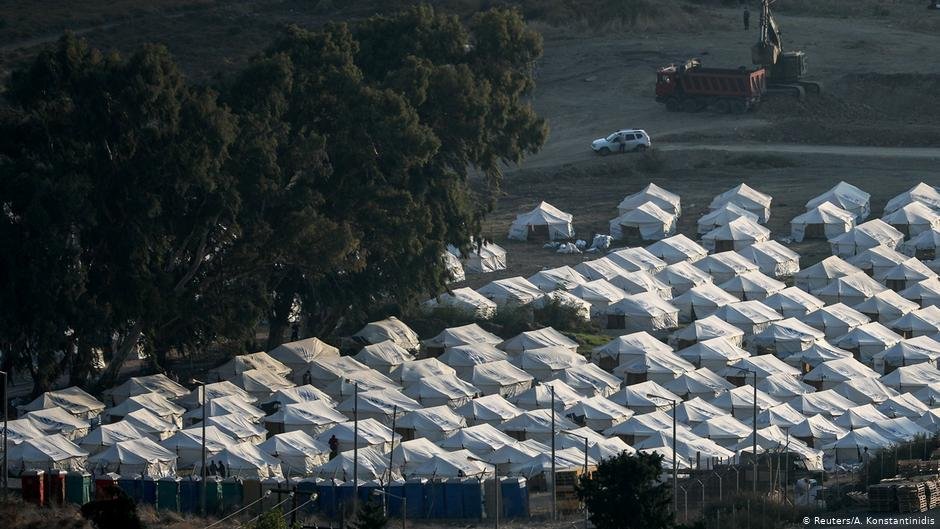 For Reza, however, going this is not part of his plans. "I have not eaten in two days," he says, and smiles. His hope of finally leaving Lesbos is stronger than hunger or fear. And many other people who have set up their own temporary camp on the main highway feel the same way. Here, the makeshift shelters are not neatly lined up as in the tent city set up by the government. Instead, chaos prevails.

The Greek military, which is meant to be in charge of distributing food and water, has left this job to the NGOs that are so unpopular on the island. And at first, there were some dramatic scenes when thirsty people who had been out in the heat for hours rushed minibuses carrying water. The helpers, overwhelmed, tried to get the migrants and refugees to keep a distance by calling out and throwing the bottles into the crowd. People started fighting. One woman was left lying unconscious on the ground, and a man broke his arm.

No structure, no security

The NGOs are neither equipped nor trained for such exceptional situations. But they adapted quickly. The next day, they formed a human chain and managed to distribute food in a more organized manner. On Sunday, they packed portions of food, bread and fruit in bags to make things even more structured. The many volunteers are highly motivated. They do their work unpaid and pay for their accommodation and travel themselves. Young people from many countries have been working together to aid refugees and migrants in the face of the many failings of European asylum policy and the organizational chaos of Greek authorities. 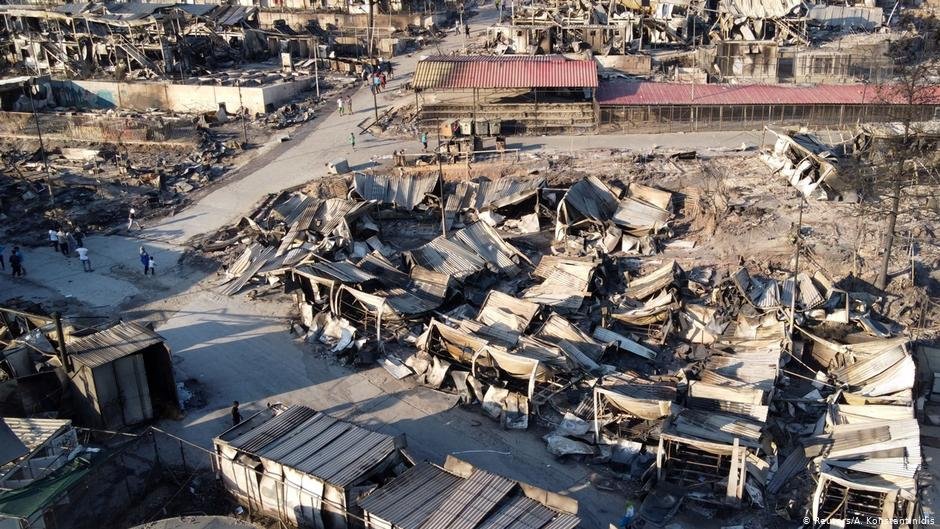 "The first days after the fire, people were everywhere and it was hard to reach them. The roads were blocked," says Henk Dinkelman, who supervises volunteers working for the organization Euro Relief, which was already in charge of accommodating refugees at the Moria camp and has been organizing basic supplies after the fire.

But it is a difficult task without the camp infrastructure."We used to have food distribution in camp and all the structures were there," he says. Under the current conditions, he says, time is needed to reorganize things. "Right now, we do it with cars. But, of course, there is a need for better structures where people can go and things can be organized better."

Here, the NGOs could do with some professional help. After five days, the Greek government had managed to set up tents behind barbed wire and create places to sleep. A catering service was hired — but it is not in a position to provide temporary toilets nor supply basic necessities. Not even with the help of the army, which is on standby and even in complete charge after a state of emergency was declared.

Since Sunday, journalists have been barred from the road where most of the refugees and migrants can be found. Even on the days before that, camera teams had to park their cars behind the first barriers and walk the rest of the way. Vehicles with local number plates are allowed through. Sometimes they are even permitted to drive along the entire road, past the island's new homeless residents.

The press is restricted in its movements in and around the new temporary camp as well. Some journalists go right around the barriers and get to the site over the hills. Others have been with the many migrants and refugees since the early morning hours.

Officially, however, journalists are only allowed on guided visits to the temporary camp and are given official statements by ministers. Greek Migration Minister Notis Mitarakis, for example, said that from "the very beginning of this crisis, our first priority was the safety of everyone involved: staff, asylum seekers and the local residents. After we ensured safety, and we also ensured continuous provision of food, water and medical support, we have started and we now already have a few thousand spaces created in this temporary camp you can see behind me."

This could almost give the impression that a miracle has occurred overnight. But reports by journalists who have managed to enter the sealed-off zone describe scenes similar to those of the day before, including some signs of rebellion by the refugees. Some deliberately provoke officials, because violence is an effective way to get attention. 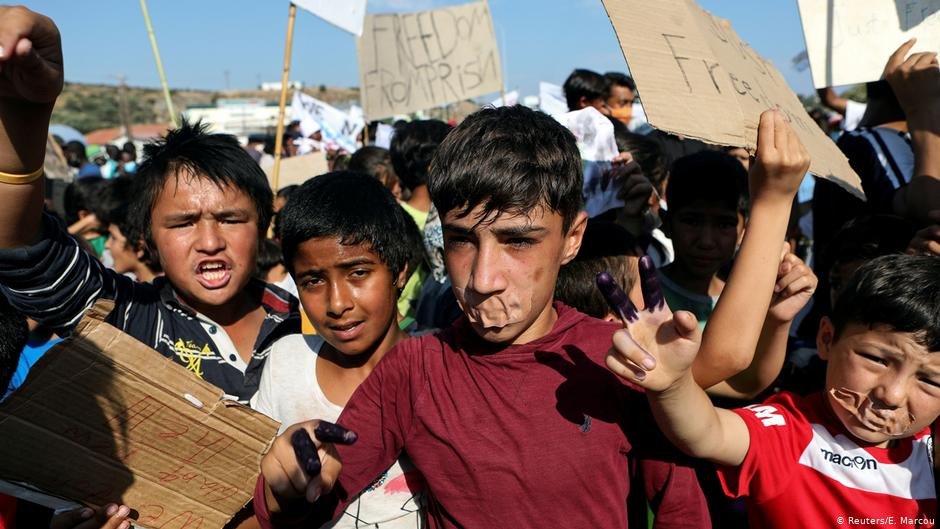 After the devastating fires in Moria, Brussels and Athens had announced that a new camp would be built on the island. No one on Lesbos wants that to happen. But that seems not to interest Western European governments very much. Almost none want to take in migrants and refugees, amid their fear that refugees on other Greek islands could resort to burning down camps in a bid to finally go to another country where they may have a future.

But the deadline for finding a solution to the latest Lesbos situation so that the scenes are not repeated has long passed. Empty promises of European solutions will not pave a way forward. But one thing is for sure: Refugees and migrants will keep coming to Europe in the future, too. And one new camp is not going to be enough to keep these people in need of protection out of Europe's view.