The German Dream - and immigration nightmares

A vast gulf lies between the perks of living in Germany and the sometimes horrifying bureaucratic experience of getting there. DW's Elizabeth Schumacher looks at some immigrants' stories - and recalls her own.

"Stop leaning against our wall, you're making it dirty."

Somewhere, there is a disconnect between everyday life in Germany - safe, friendly, "refugees welcome" posted on every storefront, recyclables obsessively sorted - and the Kafkaesque endurance test that is the Foreigners Office.

I thought that my experiences in Cologne and Freiburg, which include being lied to, having to correct my case worker on German immigration law, being forced to submit arbitrary paperwork and sitting on the ground (eight waiting-room chairs in a city of over 1 million people) for three hours past my agreed upon appointment time were terrible enough. Or the implication that I can't possibly have learned German and integrated myself of my own volition, despite manifest proof to the contrary, and that I need to take a special course.

But my situation, as an American who arrived on a student visa, of course barely scratches the surface of the degrading and insulting behavior others have had to endure. From incompetence to pointed unkindness to downright racism, every other foreigner I've spoken to in six years of living in Germany has some horror story to share.

A few things are worth noting at the outset, however. DW spoke with Katharina Vogt, a migration specialist with AWO, a workers' rights non-profit that also helps immigrants and refugees deal with the authorities.

"Since [the refugee crisis in] 2015, the responsible authorities have, of course, been completely overwhelmed, although I cannot make any general statements about every Foreigners Office in Germany. It's understandable that they are overworked, but it is not okay for people to wait for hours before the sun comes up to have an appointment, as they do in Berlin, for example," Vogt said. 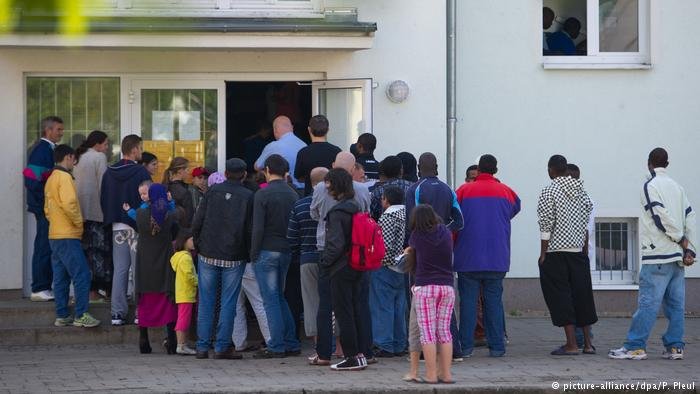 "I didn't realize that my visa was up in only two weeks," Vrajesh*, an academic from India, told DW. "So I arrived at the Foreigners Office I was assigned to in Berlin, which is quite a hike if you're stuck using public transportation. The lady looked at my documents and said, 'Oh, don't worry. You're not the problem. It's those headscarves that are the problem.'"

According to Vrajesh, it did not stop at Islamophobia: "They see your skin, sigh heavily, begin to speak slower, assuming you don't know German."

The problem extends far beyond a single city or country of origin. One must ask, in a country renowned for its efficiency, how communication has broken down so severely during such a crucial time.

In 2015 and 2016, stories of refugees waiting for over six months just to get out of their makeshift camps were rampant - and it's no wonder, if the system was already crumbling at a higher rung in the ladder even years before the refugee crisis.

Katharina Vogt of the AWO said that "even before 2015, in many cities, there were staffing problems … you have to get the approval and funds to hire someone new. Then you have to find a person with the right experience and education. These offices have been understaffed for some time."

Political pressure after the refugee crisis, Vogt said, also contributed to the authorities feeling the squeeze to make procedures run faster - which did not necessarily contribute to best practices.

"Let's get one thing straight: it's a terrible situation to begin with. You're so stressed, these people hold your future in their hands, there's no real system of who gets called and in what order, there's nowhere to sit," Yael, an Israeli journalist, said.

Yael described waiting for her appointment at one of Cologne's foreigner registries next to another female immigrant who was trying to tend to her baby.

"A man came up to us and began shouting, in increasingly loud tones, until he was screaming, that we better 'stop leaning against our wall, you're making it dirty.'"

"Not exactly what one likes to hear as a Jew in Germany. I cried a lot that day," Yael told DW.

Tears were another common theme. Not only from people who willingly shared their stories. It's simply a common sight at the Foreigners Office. In the southern city of Freiburg, I heard a man from Beijing brought to weeping after he was told that he could not remain in Germany, as his boss had cut his hours by 10 percent.

"They had to make cutbacks. I have a letter here from my boss saying I am a necessary part of the workforce," he said. "My children go to school here, my wife has a part-time job and friends. Our lives are here."

The response from his case worker: "That's not my problem, you don't meet the income criteria to stay."

Laws are laws, and that's fair enough - although you have to be careful. I had a case worker tell me it was illegal for her to address me in English, which is patently untrue.

Another familiar chorus I heard that day in Freiburg: "That's not my problem." Leah, a Canadian office worker, said she hears that all the time at the Foreigners Office in Frankfurt.

"'I don't give a damn if you wait in line all day. It's not my problem. Get here at 3 a.m. like the others then,' that's what they said to me when I asked why my scheduled appointment had not been met," she told DW.

Arriving, as she was advised, two months ahead of time to renew her visa, she was then told: "It's not my problem if your visa is up in August. I can offer you an appointment in January."

As the population ages and brain drain increases, Germany has worked hard to market itself to foreigners. Websites for finding a job in Germany, aggressive marketing abroad, university programs offered exclusively in English, all in the hopes of attracting workers from other countries. Yet somehow, this message of welcome, present in all other aspects of life in Germany, is curiously missing from the place where it should be paramount.

*All names have been changed at the request of the interviewees.

Deutsche Welle is not responsible for the content of external websites