'I feel lost without the piano'

Aeham Ahmad made headlines when photographs of him playing the piano amidst the destruction and the exodus from al Yarmouk camp near Damascus went viral. Today, the accomplished pianist lives in Germany and plays in concerts to raise awareness about the war in Syria.

I am from al Yarmouk camp, near Damascus. I am a Palestinian refugee who was living in Syria. My life was not easy. We were under siege. I came to Germany with a Palestinian passport - not exactly a passport - a travel document for Palestinian refugees in Syria. I came here around a year and a half ago. I now live in Wiesbaden [in southern Germany]. I was living in a refugee camp before and after I began working in Germany, I was able to rent a flat.

I studied at the music university in Homs and I also studied at the conservatory in Damascus. They have a similar one like in Germany, maybe the quality is not the same, but we played classical music there.

I learned music by the great composers - Chopin, Rachmaninov, Mozart, Tchaikovsky, but I won't start my concert with that today because it is important to say why I played music on the street in Syria - and a lot of musicians play classical music anyway.

I compose my own music. My songs include "Forget my name," "Oh my God, why are we here," and I play music without lyrics, with vocalisms. It's basically what I feel about home. When I have a piano and I begin playing, I cannot stop.

When I begin to play the piano and sing like I did on the streets [in al Yarmouk], I feel I'm back home. I feel I'm on the street, with the children singing. It's very special to me. You know, with musicians, we want to grow up with the things around us, but these are not with me anymore. It's important for me to keep these memories in my head, where they're still fresh. 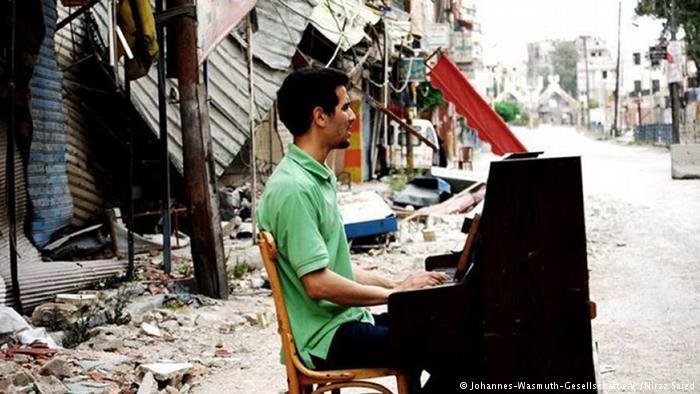 Aeham played the piano in the middle of the ruins of al Yarmouk, near Damascus

It's not an easy situation. Before the war I didn't feel like this because I went to university and had my friends and I never thought for a minute that I was a refugee. But when I decided to leave the country, I understood there was no legal way for me to do so because I only had this travel document.

Now I have a document from Germany. It's a "Reiseausweis," a travel document, it's not a passport. The document says where I was born, in al Yarmouk, and it says it is unclear which country I am from, because I am not Syrian and I am not Palestinian. I am without a state. And this is why when I begin to play the piano, I feel at home because it keeps me going. I don't think about my identity when I play the piano, but without it, I feel lost.

We have pianos everywhere, that's really good. You can't carry a piano on your back but I play in a lot of concerts, so there's always a piano closeby. And wherever I went, the house I rented, there was a piano. I also have an electric piano. Everything is good as long as you have a piano around.

Now I am in Germany and unlike Syria, it is safe. My wife and two boys are safe and I feel very happy. I am writing a book that will be published here, but my plan is to spend time with my family and my two boys.

Ahmad spoke to InfoMigrants on the heels of a charity concert organized by the UNHCR's Bonn chapter, the UNO Flüchtlingshilfe earlier this week.