Their last resort: refugees in Greece go on hunger strike

A filthy prison instead of a safe haven: Iranian refugee Arash Hampay joined a hunger strike on Lesbos to protest the dire living conditions at the Moria asylum center. His brother is detained there among thousands of migrants and refugees.

A day after receiving news that his brother and two fellow asylum seekers had begun a hunger strike in the Moria detention center on the Greek island of Lesbos, Arash Hampay started his protest. He went down to the port of Mytilene, one the biggest cities on the island and settled in the main square, holding a cardboard placard that read "refugees are not criminals."

The Iranian refugee has been in the square for over two weeks now, his one-man 24-hour vigil disrupted only by visits to his brother and the occasional trip to the police station. International and Greek activists take turns on the square at night to allow him to get some sleep. He stopped eating in late June in solidarity with the detention center hunger strike.

Arash came to Greece together with his brother, Amir Hampay. But while Arash received asylum, his brother's application was denied. Amir has been stuck in Lesbos for months waiting for his asylum appeal case to be heard. Along with Arash Bahroz from Iraq and Hussein Kozhin from Syria, who are in a similar situation, he went on hunger strike to protest the dire living conditions in Moria and their administrative imprisonment in “section B” of the camp which is where they were sent after Greek authorities rejected their asylum applications. For Arash, it is important to support his brother's case. “We came here for exactly the same reason, and yet I got asylum and my brother was rejected," Arash says.

"I'm worried about my brother's health”, Arash explains. “He's not been allowed to get salt. Here, I get a doctor coming to check on me. But there, they have nothing," he says as he meticulously re-arranges pictures of the hunger strikers by the steps where refugees wait for the infrequent bus back to Moria, a former prison compound tucked away on the top of a mountain, far from the eyes of tourists and locals.

The EU-Turkey deal went into effect in March 2016, the same time as the closure of the Balkan route to Europe. Since then, Greece began detaining new arrivals to the islands, and 14,000 people are said to be stranded on Greek islands currently. The UN's refugee agency UNHCR, however, estimates that number to be lower. Refugees are not able to travel outside the islands until they get a government-issued ID, which can take months. However, some refugees said this can be bought for about 700 to 1,000 euros.

Legality of return in question

Some asylum applicants have been living in squalid and overcrowded camps like the one in Moria for over a year as arrivals continue to outpace departures even as the number of people entering Greece through the Aegean route has drastically reduced since the EU-Turkey statement came into effect.

While other European countries failed on their resettlement promises, questions have been raised about the legality of returns under the assumption Turkey is a safe third-country, and about Greece's overburdened asylum system.

After Amir Hampay's asylum application was rejected, an appeal was filed with the Greek courts for its re-examination. Despite that, one morning in April, the police took him without warning from Moria camp to the port of Lesbos to deport him to Turkey. He was pulled off the boat at the last minute, and the European Court of Human Rights has issued a temporary order to stop his deportation. Amir has been detained in Moria since.

A prominent human rights activist, photographer and filmmaker in Iran, Arash used to run an organization called Hamyaran-E-Mehrandish. He describes it as humanitarian in nature, working with women, children, Afghan refugees and the families of poor laborers. Arash's work was in part inspired by his father, a laborer killed by Iranian paramilitary police when he was a child. An older brother of his followed the same fate a couple of years later. In an Iranian prison, Arash himself was beaten by security forces, losing nine teeth. 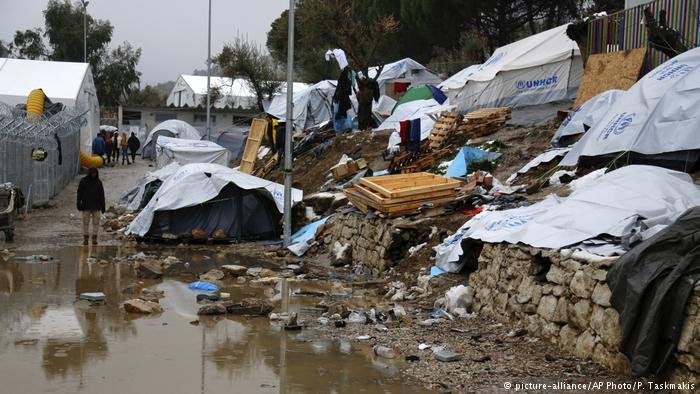 But it wasn't until January 2016 that Arash felt it was time to flee when the threat of a lengthy prison sentence for what the government considered illegal political activity began hanging over his head. After a stint in Turkey, where he said he also attracted the attention of the authorities for his work with refugees, he set off to Europe looking for a safe haven last September. Instead, he found overcrowded and filthy camps fenced in by barbed wire, refugees living in tents unequipped for cold temperatures amid an extremely harsh winter. At least four people were reported dead.

“We had no electricity, no heaters. A mother and daughter died when their tent caught fire as they were trying to have some heat. They cleared the ground where there was still blood and put a tent on top. No one said sorry,” Arash says, unable to conceal his anger.

He attempted suicide after five months in Moria, where he spent a total of seven months before being moved to an apartment in Mytilene. Recent research conducted by Human Rights Watch on Lesbos found many refugees trapped on the island by the EU-Turkey deal had reported anxiety, depression, aggression and incidents of self-harm.

Earlier last week, a riot broke out in Moria as several containers hosting the offices of EASO, the European Asylum Support Office responsible for examining applications, were set on fire. The past few weeks saw a spate of arrivals to Lesbos from the Turkish coast – 940 people arrived in June, the highest monthly figure since September 2016 – while only 179 refugees were transferred to the mainland that month, according to a UNHCR count. This has placed serious strain on Moria, where about 2,700 people, including families and unaccompanied children, live - far beyond its accommodation capacity.

In the cafes outside Moria, most of the new arrivals said they were looking for a way out. Others were headed to Mytilene on the infrequent bus service. If they were to take the return journey to the camp every day, it would cost them their entire monthly allowance of 90 euros.