Once again, riots broke out at the Moria refugee camp on the Greek island of Lesbos this week. Local politicians and migration experts are striving for solutions.

Moria was the first "hotspot" registration and reception camp established in Greece four years ago. Back then, it was considered a better alternative to overcrowded detention centers or police stations on the Eastern Aegean Islands. The new camp was originally planned to accommodate about 1.500 people. But today, more than 3.000 migrants and refugees from all over the world are stuck in Moria, living under harsh conditions.

Overcrowding creates frustration and is the main reason why riots happen there, says the mayor of Lesbos, Spiros Galinos. Things are getting worse since more and more migrants on Lesbos were denied asylum in recent weeks. He cites an example: In the beginning of July, migrants from Africa set fire to the Moria campus after some of them were told their asylum request were rejected and they would be deported to neighboring Turkey. "Most migrants and refugees are peaceful, but you don’t need more than 50 rioters to start what looks like a general uprising on the island, which it is not really, though", Galinos told InfoMigrants.

For Daniel Esdras, chief of the International Organization for Migration (IOM) in Greece, the key problem lies in long and complicated asylum procedures. Asylum seekers on overcrowded Lesbos simply get tired of waiting for authorities to decide whether or not to take them in, he believes. Asked whether Greece can cope with refugee flows alone, Esdras points out that this is clearly a European issue.

"International experts are trying to help Greek asylum authorities but don’t have any decision-making powers. What is even more important: we don’t have common asylum criteria all over Europe. 85 percent of Afghan migrants may successfully seek asylum in Italy, while at the same time only 5 percent can make it in some Northern European countries," Esdras told InfoMigrants. Around 14.000 migrants are living on Lesbos and the neighboring island of Chios today, waiting for examination of their asylum applications. They may wait one year- or even longer, he added. 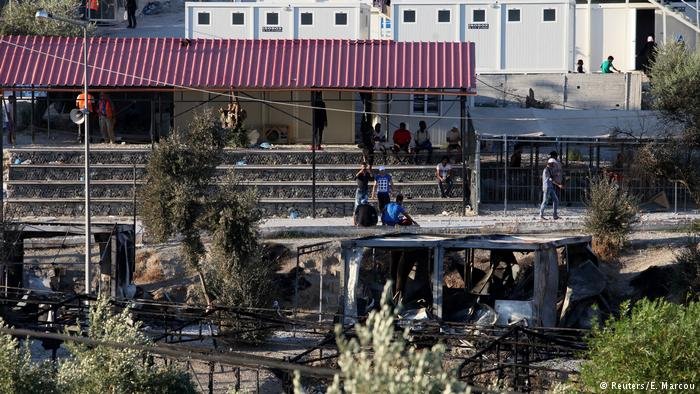 What adds to the problem: refugees and migrants still keep coming to Greek islands. For Esdras, the EU-Turkey refugee deal that went into effect in March 2016 seems to work. Nonetheless, there may be "70 or 80 arrivals every day - many of them on Lesbos," Esdras reckons. This means that asylum seekers who are trapped in overcrowded camps often need to share their limited space with newly arriving migrants. In the Moria camp, arrivals apparently outpace departures.

Mayor Spiros Galinos' abilities to improve the situation is limited. Moria is run by the Interior Ministry in Athens and not by local authorities. However, Galinos is responsible for another refugee camp in the area of Kara Tepe, opposite the Turkish Aegean coast. More than 700 refugees, many of them women and young children from Syria, are already living in this open camp, in reportedly decent conditions. "After recent riots broke out in Moria, we managed to get about 60 people from there, mainly young families with children, and bring them to our own camp in Kara Tepe- just to give them a sense of security," the mayor said.

In the long run, it’s essential to offer migrants, especially rejected asylum seekers, more options than a deportation to Turkey, Daniel Esdras asserted. For this purpose, the IOM runs a voluntary return and reintegration program, mainly for asylum seekers whose applications have been denied. According to IOM Greece, more than 35.000 people participating in this project have safely returned home since 2010.

"The Geneva Convention is quite clear on this point: asylum seekers, who are not granted international protection, may be expelled from their host country. But then it’s important to offer those people a credible option for reintegration back home," Esdras noted.

In the next days, human rights activists are expected to hit the streets in Lesbos and protest inhumane living conditions in local camps. Mayor Spiros Galinos feels irritated and sees no real point in those protests. "All relevant politicians and ministries involved in the refugee crisis have their seat in Athens, not on the island of Lesbos. Therefore, if activists feel like protesting, they should go to Athens and hit the streets there, not here," he said.

It is clear that Galinos worries about the tourism industry which had been the major driving force for the economy on the third biggest Greek island in the past. It was severely hit during the refugee crisis. "We have undergone tremendous efforts to deal with bad publicity and, for the first time in recent years, we can be somehow optimistic about tourist arrivals. But now we should finally let people work and earn their living on this island," the mayor concluded.