Bicycle course helps refugees get a sense of freedom

Refugees who are starting their lives afresh often don't have money to pay for public transport. A new initiative in Cologne is helping them get around the city independently.

The refugee reception center in Cologne's west is a massive building, housing up to 500 migrants. Its inhabitants include asylum seekers, whose applications are still pending with the Federal Office for Migration and Refugees (BAMF) as well as recognized refugees, who are still learning German and looking for gainful employment.

A bike riding course at Cologne's nearby “Radstation” ('bike-station') helps the refugees gain a useful skill and also get around the city for free. “We started this program around two years ago,” says Eva Schmitz, who runs the course for the charity organization IN VIA.

“This is an initiative of IN VIA and the Archbishopry of Cologne. They thought they needed to do something because so many refugees were coming and public transport is really expensive,” she explains. Initially, the group launched bicycle donation events. "Cologne residents give us their old bikes and we check how good they are. We repair them and for that, we get money from In Via and the Archbishopry.” Now the organization also offers training for interested refugees. 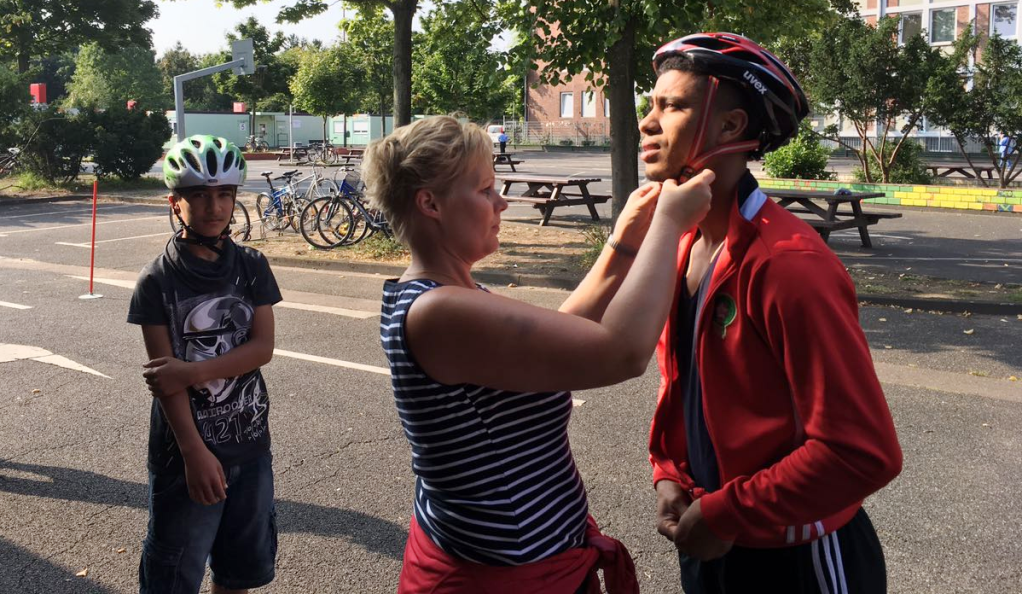 Thirty-one people have registered for the course at the refugee shelter in Cologne's western part until now. Around 10 men, including a young boy, are participating in the course this week.

From her big box full of bicycle gear, Schmitz takes out thin poles and discs of different colors and lays them on the parking lot that now serves as a playground and community place for the shelter's residents. She takes out some helmets and helps the course's participants wear them. “Helmets are sexy,” she says, helping a young man wear the protective gear.

Shortly after, she takes out two pedal-less balance trainers for the participants. They are then told to ride these bikes through the obstacles. “Firstly, we make sure that they have something constructive to do. We have workshops which are open on Thursdays and Fridays and we also want them to check out their bikes so they know what it is all about and also learn its value,” Schmitz says.

After everyone gets comfortable with the balance trainers, Schmitz takes out bikes with pedals and asks the men to navigate through different obstacles. They are also told to ride around in circles and maintain their balance while doing it. 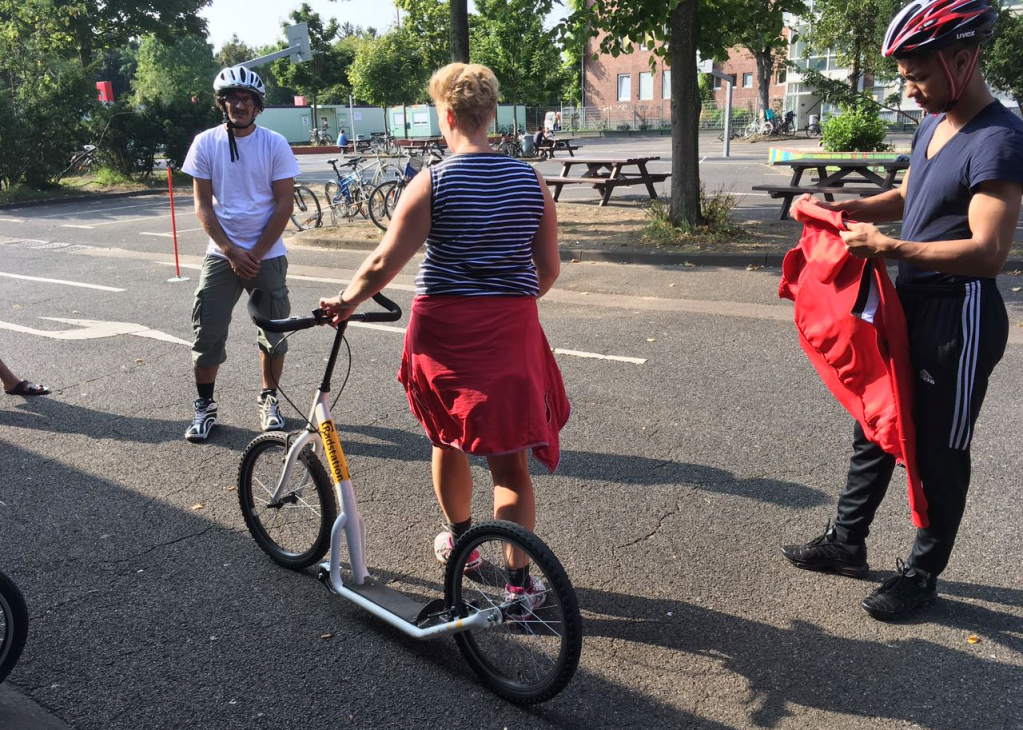 During a short break for coffee and juice, Schmitz explains traffic symbols and their different meanings, so the newcomers can navigate their way more confidently on Germany's roads.

There are different types of courses on offer. A beginner's course lasts 20 hours. An advanced course like this one consists of 10 hours, but there are also short courses for learning traffic regulations that only take 4 hours. At the end of the courses, the participants get a certificate saying they have successfully learned how to ride a bike. Schmitz then helps them get a free bicycle, which they can use to get around the city.

Many women have also benefited from bike riding classes, Schmitz says, especially since many never rode a bike back home.

“This course has emancipated them, in a sense,” she explains, adding, “They are free, they can ride around on their bikes and are not restricted anymore.” She did experience some challenges though, for example, when women wearing traditional clothes joined her course.

“I never had someone who wore the burqa, although headscarves and long dresses were common. I used to somehow tie the ends of their dresses so they stayed away from the chains and wheels. But then the women stopped wearing such clothes the next time they came for the course. They adjusted pretty quickly,” she adds.

Most participants in the course are happy they have the opportunity to do something constructive right at the refugee shelter. Yrysbek from Kyrgyzstan has been living in the refugee home for over two years and 8 months. He still does not have a work permit and is waiting for a decision from the BAMF. “I think this is an important skill,” he says, adding that he would like to get a free bike once he has his certificate. 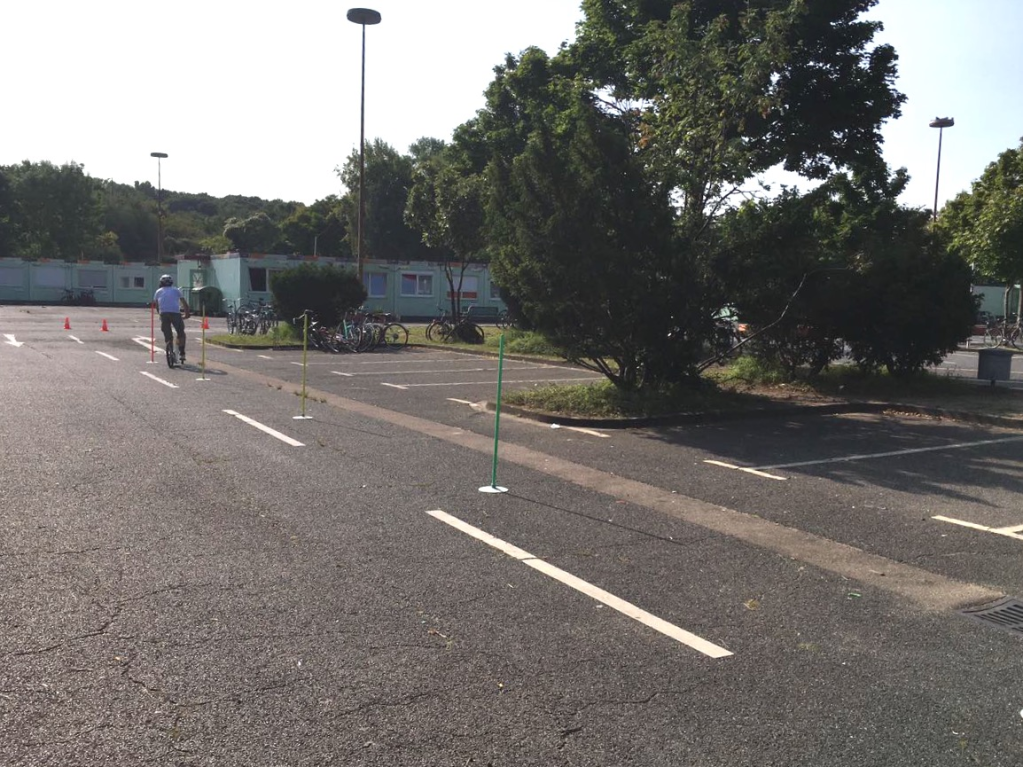 Redouane is from Casablanca in Morocco and has found a job in a warehouse. “I can ride my bike much better now,” he says. “I would have otherwise made so many mistakes on the street. The important thing is also that I will get some kind of a bicycle drivers' license and then I won't have any problems with the police,” he adds.

Unlike Redouane, there are also others who reportedly do the course and get a free bike, only to sell it at the local free market, “for 25 euros,” says Mohammed from Syria. He is unwilling to participate in the training because he doesn't feel it's going to help him in any way. “I have three children and I haven't found a job,” he says, complaining about life in Germany.

He and his family have been unable to integrate in Germany because of the language and because he has no school qualifications to show. “I am learning German and will probably find a job after. But I am not happy here. I fell sick after I came to Germany one and a half years ago,” he says, adding that he already has a bike which he uses to travel around the city.

But he would like to go back to Aleppo as soon as possible, especially since he feels he has hardly had a chance to live and know the country. “This is not Germany – inside the camp. The real Germany is on the other side,” he says, pointing beyond the shelter's premises.