The idyllic island of Tilos: a place to decompress

Safaa stands in front of her container, stopping two-year-old Fatma from escaping. Fatma, Safaa’s youngest child, keeps trying to get out of the house to chase the numerous wasps buzzing around the fruit sitting on the outdoor table. Safaa puts on her shoes. In 15 minutes she has to be at work: a small hotel on the beach. "It’s fun, I’ve never had a job before. In Damascus, I took care of my children," said the young Syrian mother, adjusting her veil. "Here, I found employment. I work in a little hotel in the morning, and in a café in the afternoon. It allows me to earn a bit of money."

A few months ago, Safaa and her family put down their suitcases on Tilos, a small Greek island more than 500 kilometers from Athens, at the end of the Dodecanese archipelago. "Of course, it's much better here than on Lesbos," said Safaa, who lived in the Moria camp, notorious for violence among refugees. The change of scenery is radical for her and her family: Safaa traded an existence of barbed wire for a life along the clear waters of the Aegean Sea. 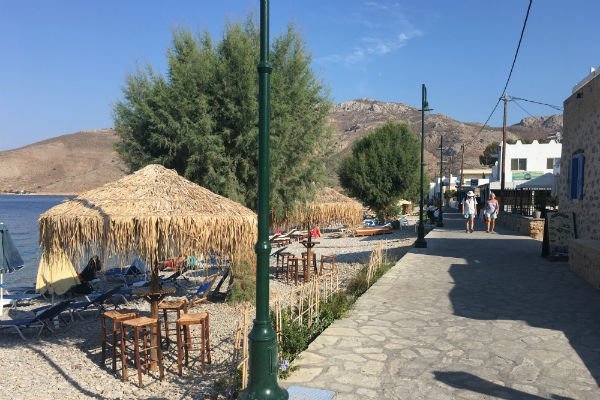 Integration: 'The only way to solve the refugee crisis'

Like Safaa, some 40 asylum seekers and refugees had the chance to settle in Tilos, an island of 800 inhabitants in summer, 300 in winter. They were selected as part of an unprecedented program, a pilot project set up by UNHCR in July 2016 in an effort to try to find an alternative to the country's vast migrant camps. The concept: to create in the heart of a city an accommodation center where a small number of refugees, all of the same nationality, mix in with locals. Eight residential containers were set up on a former military base in the village. In all, the camp isn’t bigger than one square kilometer.

“I’m convinced that this program is a very good idea, it’s the only way to intelligently understand the problem of the refugees in Greece," said the current mayor of Tilos, Maria Kammas, who passionately defended the project. "Gathering a small number of people and mixing them with the population, it can work." The island of Tilos has always been known for its open-mindedness. His predecessor, Tasos Aliferis, had notably performed - illegally - two homosexual marriages in 2006 - still not allowed in Greece today. 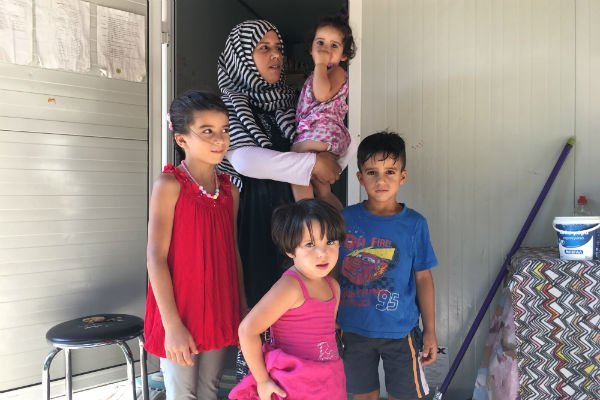 A progressive and feminist island

The implementation of the project required a lot of groundwork. All the parties wanted reassurances. Asylum seekers chosen by UNHCR to be part of the project were afraid of being sent back to Turkey. The locals, for their part, were concerned about the integration of refugees on an island so small that it has only two villages: Megalo-Chorio and Livadia, where most of the tourists activity is based. "At first they thought we were going to recreate a hotspot ... Naturally there was some apprehension, but today the presence of refugees has become quite mundane." The fact that only families are allowed to participate in the program has largely reassured the population.

Walla mops the floor in a small bar in Livadia, while early risers sip coffee with their feet (almost) in the water. Like Safaa, this 27-year-old Syrian woman found two jobs: the first in one of the city's bars, as a cleaner, the second in a small hotel a few meters away. Tilos offers its Syrian wards a foundation for a life and the prospect of independence. Walla had never worked either, in Deraa, her native town in Syria. 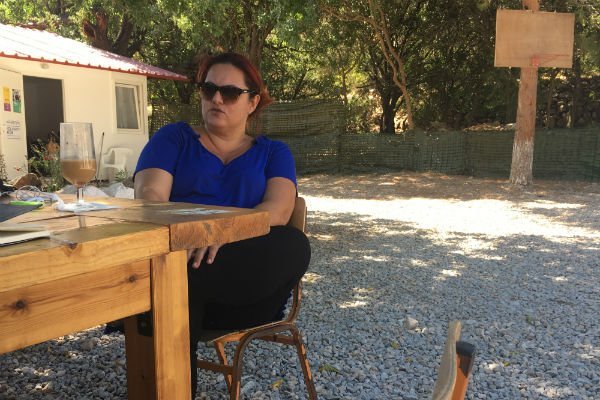 "It is true that beautiful things are happening here. In just a few months, women have a new mentality," smiles Elena, a member of the NGO Solidarity Now, which deals with the refugee’s living quarters. "They used to take care of the children. Now some of them work while their husbands stay at home," she laughs. "It's easier to find a job in the hotel business when you're a woman." The inversion of roles is strange for a population whose customs are still based largely on a tradition of patriarchy. "Now it's up to men to change diapers and learn how to make breakfast while their wives go to work."

Seva, Walla's employer in the hotel where she works half-time, is delighted to have hired her. "She works well, that’s the important thing," she says simply. "I don’t see why I wouldn’t have hired her. I needed help making up the rooms," adds Seva, who says she pays five euros an hour, like "everywhere here."

According to the mayor of Tilos, bringing refugees to the island was a win-win at a time when the country is trying to recover from the devastation of the economic crisis. "They fill an economic void, and in the summer we need manpower to fuel our tourism business. The refugees boost our economy. They buy locally, they consume. Everyone comes out ahead."

The benefits of the arrangement are not strictly financial. In Tilos, it is not uncommon to cross paths with a refugee riding a bike, strolling along the beach, families taking a walk at nightfall at the water's edge, or to see children from the center frolicking in the sea in the midst of a few Greek, Swiss, and French retirees who are there for a leisurely swim. The gamble of integration seems to have paid off. The migrant reception center also invites the Greeks to mingle with the refugees. "As part of this program, we were able to bring in an English teacher and a music teacher. We are working on the assumption that all the inhabitants of the island can benefit from it, not just asylum seekers," explains the mayor of Tilos.

This morning, the atmosphere in the center is relaxed. "Yaman, come here, it's time!" Says Eleni, the professor and a member of Solidarity Now. The young boy instantly stops and runs in the direction of her voice, joining, head down, his little comrade Heba in the classroom. Today, multiplication tables are on the program. If Heba, 10 years old, clearly best in the class, heralds the right answer by saying, "This problem is easy,” Yaman needs more time and all his fingers to find the solution to the problem, 3x6.

'It’s good here, but our life is on hold'

Outside the school, Elena, from Solidarity Now, says she is proud to participate in the project. "We are almost the only ones providing a welcoming program," she says. The Mayor of the village of Kyllini, in the west of the country, has also opened the doors of his city to refugees, all housed in a former touristic complex. "Here, out of eight families, three say they want to stay on the island permanently." The other five are waiting for refugee status to try their luck elsewhere.

Tilos is, for many, just a transitional stage, not a place to rebuild a life. "I don’t care which European country opens its doors to me, but we have to find a big city to settle in," said another resident of the center, Mohsen, who hadn’t found work in Tilos. "Even if it's better here than in other camps, we need stability, I need my children to go back to school, I need to find a job. Our lives are on hold for the moment."

This father seems in a hurry to find a solution. He is afraid being sent back to a hotspot. Mayor Kammas is not sure she will be able to extend the refugee program beyond the end of the year. "Funding problems with UNHCR and ECHO [the EU service linked to European humanitarian aid operations]," she says, without going into details. She is trying to come up with a plan to keep her charges on Tilos. Her latest idea was to integrate the refugees into a cheese-making project. "We are looking for funding," she says. "In Tilos, we are famous for our cheese, and with the desertification of the island, the industry died out. We could try to revive it…It could work, we would all get together, refugees and locals, hand in hand."