Kastro: A Syrian migrant helps refugees in Athens get a roof over their heads

Despite the 2016 migration deal between the EU and Turkey, some 60,000 people fleeing war still find themselves stuck in Greece, often in dire conditions. InfoMigrants went to have a closer look. In Athens, we met Kastro, a Syrian native who leads a daily fight to house refugees arriving in the Greek capital.

In the working-class neighborhood of Exarchia in central Athens, Kastro’s name has been scribbled on the graffitied walls with black marker pens. Known to be both determined and passionate about his cause, Kastro, or Soleimane Dakdouk, which is his real name, is almost a caricature of himself: A big white beard frames his olive-colored face and his long hair has been attached with a rubber band to the back. In many ways, you could almost mistake this Syrian refugee, who came to Greece in 1987, for an Indian guru.

Not even five minutes will go by without at least someone knocking on the door to his first-floor office - located in an abandoned Athens school - with a question. “Excuse me, in which room are the children activities taking place?” someone asks him. “What are we making for dinner today? And I think there might be a problem with the electricity in one of the rooms,” someone else says, wanting Kastro to come along and have a look. 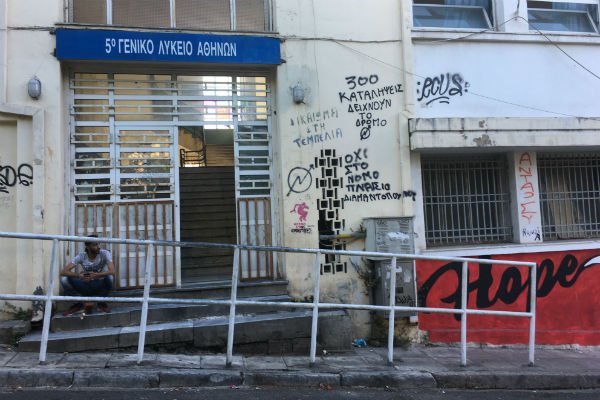 ‘The council said no, but we occupied anyway’

For Kastro, this is what he witnesses on a daily basis: He’s constantly bombarded with questions related to the concerns of nearly 800 refugees living in the five squats he opened in 2016.

“Two of the buildings we occupy are private property and three of them are public,” he explains. “At first I asked the council for permission to use this abandoned school we’re in, and she said ‘no’, but we came here anyway,” he laughs. 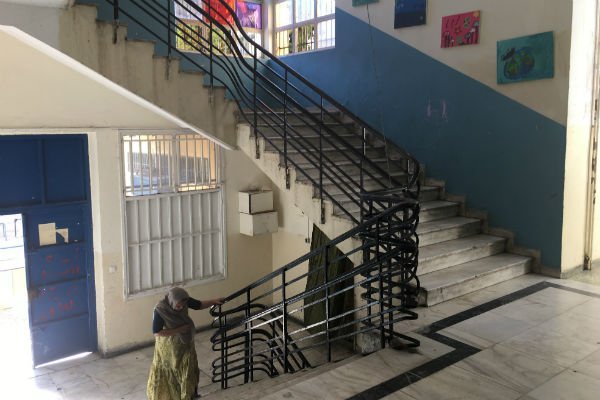 All of Kastro’s five squats are located in Exarchia, a leftist Athens neighborhood that has been at the forefront in the fight for the opening of European borders and the free movement of refugees. In addition to Kastro’s five refugee shelters, the neighborhood hosts at least 10 more refugee squats – most of which are run by anarchists. The biggest one, the City Plaza Hotel, houses almost 400 people. 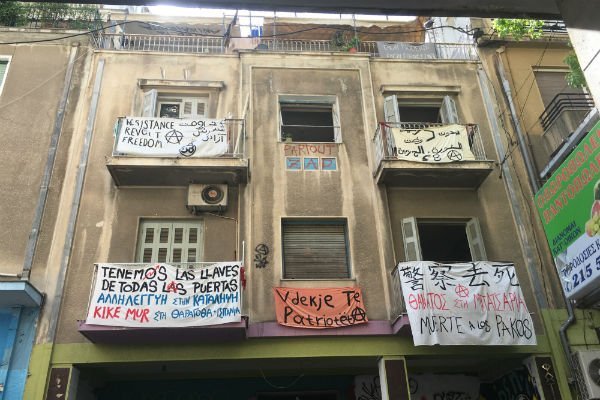 In Exarchia, Kastro has made quite a name for himself – not the least because of his demonstrated devotion in wanting to help refugees and migrants.

“Almost everyone knows who he is around here,” a far-left activist says. “It’s someone very special and he’s indispensable around here. His name always comes up when there’s talk about anything major that needs to be done in the neighborhood.”

But Kastro would much prefer to stay more anonymous when it comes to his growing reputation.

“It was total chaos at the time. There were migrants everywhere; in the parks, under the bridges, in the streets. They were blocked here in Greece, without any possibilities of moving forward. We had to do something,” he says, every now and then taking a puff of the cigarillo hanging out of the corner of his mouth or taking a sip of his cup of South American mate. 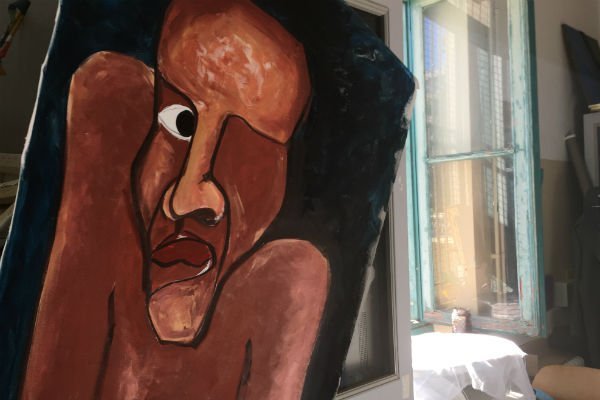 It all begun in 2015, when Kastro visited the island of Lesbos, 250 kilometers from the Greek capital, and realized just how bad the migrant crisis had actually gotten.

“There were more than 12,000 people on the streets there. The camps were overflowing. People were sleeping anywhere they could.”

Once back on the mainland, Kastro started to look for ways to shelter them.

“Things just got worse and worse with time. The Macedonian border [which people cross to take the so-called Balkan route] closed. People continued to arrive here and got stuck.”

Kastro, who hadn’t yet found a sustainable way of sheltering the refugees in Athens, decided to reach out to Nosotros, an anarchist group based in Exarchia, and many of its members opened up their homes to house them. “But it was a constant flow of migrants! We had to find other solutions,” he recalls

After spending several days looking for potential shelters, Kastro realized there were several empty buildings in Athens. “We found a school that was closed three years ago, and so we said to ourselves: School are good, in wars, people often seek refuge in schools.”

In the space of just a few months, Kastro and his team had found and occupied a total of five buildings. 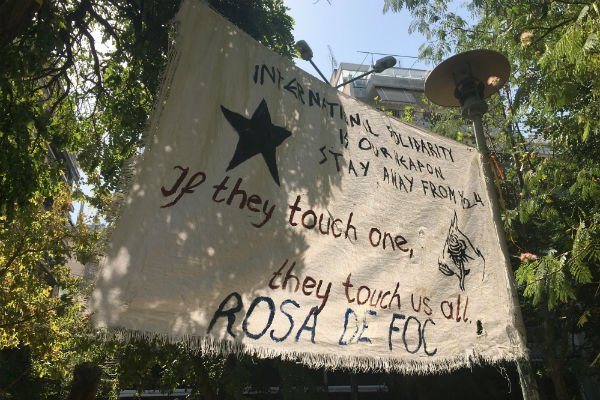 “We managed to connect water and electricity. We repaired the toilets and got furniture. The council, which was overwhelmed by the crisis, didn’t dare to kick the migrants out,” he explains. “Even today, the police sometimes pass by just to show that they’re around, but they don’t enter the squats.”

At the height of the crisis, Kastro’s five squats housed up to 1,800 people.

Kastro co-manages the shelters with a small team of Greek volunteers consisting of “all leftist currents so that we’re not too politically branded.”

Kastro almost seems to have been born an activist, always fighting for one cause or another.

As a young Syrian communist, he managed to flee Hafez al-Assad’s regime while participating in a university exchange in 1987. Upon his arrival in Athens, he knew he would never be able to return to his homeland, but his political convictions would remain. After enrolling into a Fine Arts programme, Kastro continued his activism on the side. During the 2003 EU summit in Thessaloniki, he was one of the seven anti-globalization protesters that were arrested. “We were sentenced to six months in prison. We went on a hunger strike. That’s why my name is written on the walls around here,” he says. “I became a bit famous back then, that’s all.”

Kastro, who refurbishes buildings and paints in his spare time, likes to describe himself as an artist. “I used to have an art gallery. But sometimes I would also work as a street-painter to make money,” he says, showing off some of his works that decorate his desk. He also says he is the first migrant to have joined a Greek union. 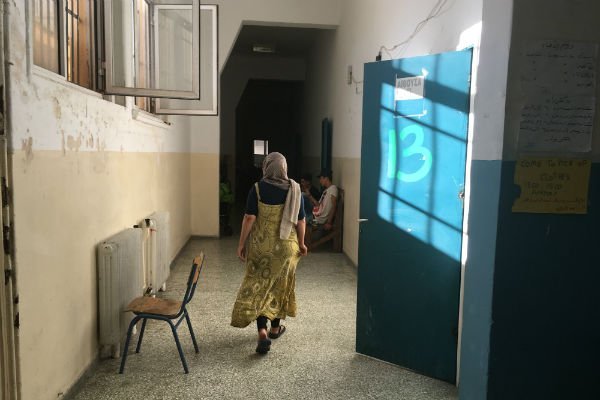 “The question isn’t why I get so involved in politics, but rather why others don’t.”

Equipped with a rather strong personality, Kastro has made both friends and foes during his years in Athens. In the Exarchia neighborhood, for example, the relations between Syrians and other far-left groups can sometimes be frosty. “I have problems with some of them, especially on a political level,” he says but without giving any details.

“Perhaps they don’t like me because I’m not affiliated to any party here,’ he says.