The EU relocation program for refugees has officially ended, falling considerably short of the goals it had set out to achieve. What does this mean for migrants in the EU?

Devised in two stages in response to the influx of migrants in Europe in 2015, the program provided a framework for the European Union to apply its solidarity principle to the challenges of the refugee crisis. The relocation quotas set out in the two Council Decisions on relocation in September 2015 were aimed at relocating 160,000 refugees from Italy and Greece to other states by September 2017.

The scheme, however, seriously fell short from those numbers, reporting fewer than 29,000 relocations in total in its 15th report on relocation and resettlement published in September 2017, and representing only about 18 percent of the goal the program had initially set out to achieve.

Meanwhile another 10,000 refugees have been promised placements under the EU's relocation program and will accordingly still undergo relocation even after it expires. The overall success rate of the relocation initiative, however, appears to be inadequate nonetheless.

The reasons why the program failed to boost greater success rates are varied. The fact that some EU member states failed to play by the rules and accept their fare share is, however, likely not a major contributing factor.

Hungary, Slovakia, and Poland challenged the legality of the Council Decisions at the Court of Justice of the European Union, and were rejected. The Czech Republic stopped taking in its allocated share of 2,600 migrants after accepting only 12. Austria also showed some hesitation but eventually pledged to set things in motion and take in 50 migrants from Italy – out of the 2,000 it was originally allocated.

Other countries, however, fared remarkably well under the scheme: Malta is the only EU state that slightly exceeded its quota, while Finland came in second place, meeting 94 percent of its agreed commitment. 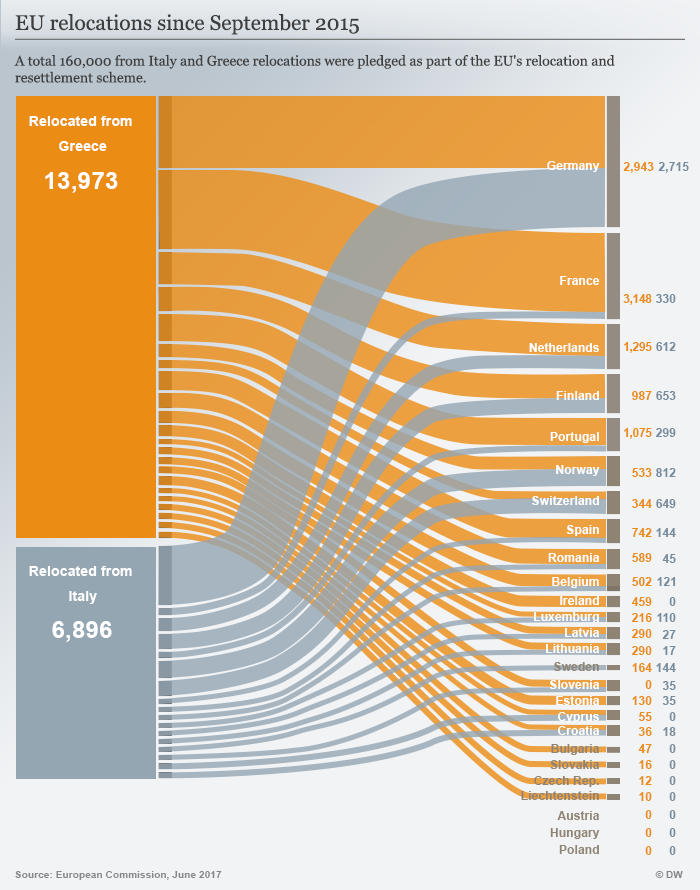 Despite these issues, the relocation program continued to operate at a steady pace, gaining speed over time and yet falling seriously short on achieving its target goals. While several EU states with large allocated quotas fulfilled their commitments there simply were not enough refugees to qualify and process on an immediate basis.

The chief reason for this is the fact that the EU's resettlement program with Turkey gained in strength over the past two years, considerably slowing down the flow of migrants into Greece. With Turkey accepting the bulk of refugees from safe countries of origin, the refugee flow into Greece in particular slowed down considerably. Furthermore, many refugees have also made use of voluntary return schemes after facing rejection in the EU.

Amnesty International has already criticized the European Union for failing to renew the relocation program or coming up with a similar scheme to ensure the safety and future of thousands of refugees still stuck in limbo in Greece or Italy.

"Two years after this scheme was agreed, most EU member states have fundamentally failed refugees and asylum-seekers, shirking their responsibilities and leaving thousands abandoned in Italy and Greece," Iverna McGowan, Director of the Amnesty International European Institutions Office, said.

Trends in migration, however, keep shifting constantly, with new solutions required to each set of challenges. While migrant numbers are expected to remain low in the winter months, developments in refugee movements will have to reassessed in the spring months of 2018, with policies being enacted accordingly.

Whether the European Union might issue another set of relocation policies will largely depend on how refugee numbers unfold next year. Even if relocation proves to be an unlikely route then, the lessons learned from the 24 months of the implication of the scheme will help to meet future challenges in migration.