Since mid-October, 28 Iranian Kurds staying in Kærshovedgård Danish deportation center have decided to go on a hunger strike to protest against their living conditions and to have their asylum application file reopened.

Inaugurated in March 2016, Kærshovedgård -a udrejsecenter (departure or expulsion centre) located approximately 300 kilometers West from Copenhagen (Denmark)- houses rejected asylum seekers. Its 180 residents of all nationalities find themselves stuck for weeks or months because of their stateless status or a missing deportation agreement between Denmark and their country of origin.

Among all these cases lost in administrative and diplomatic limbo, 28 Iranian Kurds are voicing their concerns using a drastic method: a hunger strike. Ingesting only water and sugar to stay alive, they have been refusing to feed themselves since October 11th, hoping it will catch the authorities' attention. There is currently no deportation agreement between Denmark and Iran.

A few hunger strikers fainted and were treated by emergency doctors, according to Nanna Kathrine Dahler-Larsen from the Copenhagen-based Network for Contact Persons for Rejected Asylum Seekers.

The conditions in Kærshovedgård have been criticized as "unbearable" by Amnesty International and the Danish Helsinki Committee. Several academics have even compared the center to a prison.

"The hunger strikers at Kærshovedgaard are not criminals, but humans, [...] who are now living under conditions a lot worse than those of people who have been convicted for crimes," said Martin Bak Jørgensen, associate Professor at the Center for the Study of Migration and Diversity at Aalborg University. 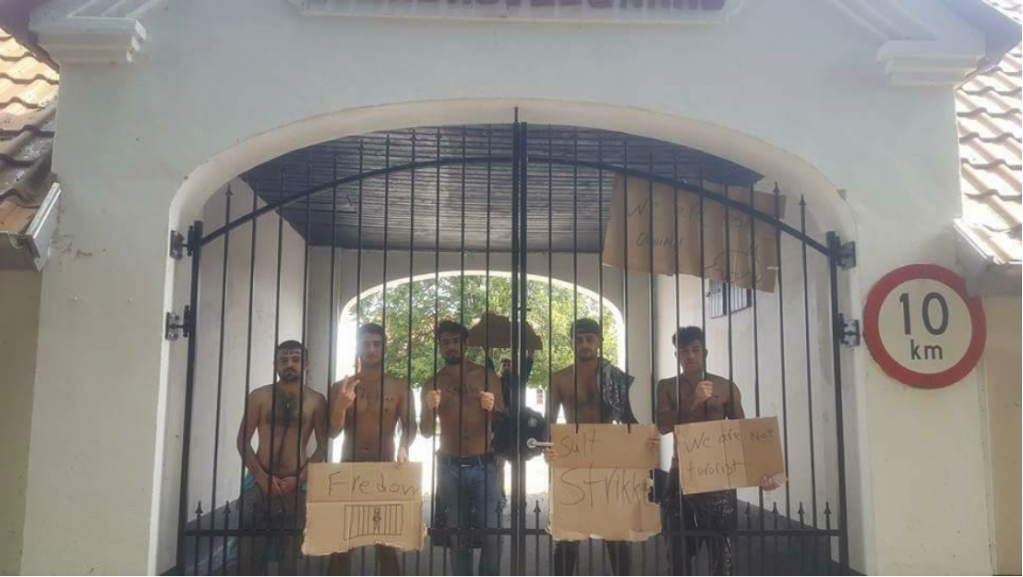 According to some experts, the idea behind centers such as Kærshovedgaard is to discourage the migrants so much so that they feel the need to leave Denmark as soon as possible and accept any return program back to their country of origin. Even if their lives are threatened back home.

"The centre’s main function is to impose living conditions that are so intolerable that people will leave. Consequently, [the centres] are not created in a way that allows for a normal, healthy life," Martin Lemberg-Pedersen, assistant professor in Global Refugee Studies at Aalborg University, told The Local news website.

Unlike regular migrant centers, no basic activity, language course or entertainment of any kind is offered at Kærshovedgaard. Even if the facility has no fence or bars to maintain residents inside, it is isolated -the nearest town being seven kilometers away and not accessible by public transportation.

Left to themselves, several migrants suffer from mental health issues such as depression. A few cases of suicide attempts have also been reported, according to Danish newspaper Politiken.

"I am feeling like an animal here, because I cannot go to school and I don’t have anything to use the time with. I feel that Kærshovedgård is a prison. I haven’t done Denmark anything wrong. I haven’t stolen anything. I am a human like others," said one of the protesters quoted on a Facebook page created to support the hunger strikers.

"I am not going to give up before I get an answer from the government of Denmark. [..] I am going to die for humanity and freedom," he added.

Kamran Mohammadi, another participant, told The Local that Kærshovedgaard residents had to speak regularly with the police who asked every time why they hadn't returned home yet. "They say 'why don’t you leave, you have no opportunities in Denmark.' It’s making people mentally ill," the 30 year-old said.

NGOs have been calling for the closure of Kærshovedgaard for weeks, as well as Sjælsmark center, another similar facility dedicated to families.

Since the beginning of the European migrant crisis in 2015, Denmark has been implementing a proactive anti-immigration policy. In January 2016, the Danish Parliament adopted a controversial bill allowing to confiscate asylum seekers' valuables to pay for their upkeep.

More recently in March 2017, integration minister Inger Støjberg sparked a furious backlash after she shared a photograph of a cake on social media to celebrate the approval of her 50th amendment to tighten immigration controls in Denmark.