More than 33,000 people have died attempting the perilous journey across the Mediterranean since 2000, according to a UN study. With routes between Turkey and Europe blocked, pressure has increased on the route to Italy.

The International Organization for Migration (IOM) on Friday said the Mediterranean Sea remains "by far the world's deadliest border," with more than 33,000 migrants dying in the attempt to make the dangerous crossing since 2000.

Although the number of deaths has dropped since record arrivals on European soil from 2014 to 2016, the risk of death during the journey has risen significantly, according to a UN report published by the IOM.

A controversial migrant deal with Turkey and naval blockades by Libya's coastguard have made the journey across the Mediterranean more dangerous as it shifted the route towards the longer central crossing to Italy, said Philippe Fargues, one of the UN report's authors and professor at the European University Institute in Florence, Italy.

"Cooperation with Turkey to stem irregular flows is now being replicated with Libya, the main country of departure of migrants smuggled along the central route. However, such an approach is not only morally reprehensible but likely to be unsuccessful, given the content of extremely poor governance, instability and political fragmentation in Libya."

More than 161,000 migrants and refugees have arrived in Europe this year, with 75 percent of them arriving in Italy via the central route. In 2015, the EU witnessed a sharp rise in migrants entering the bloc, many of them refugees fleeing war in the Middle East, Asia and Africa, with Germany receiving nearly 900,000 people.

However, authorities estimated that less than a third of the migrants arriving in Italy this year are seeking refuge, pointing to an increase in economic migrants, Fargues said. The major groups of migrants in the EU this year come from Nigeria, Eritrea and Guinea. 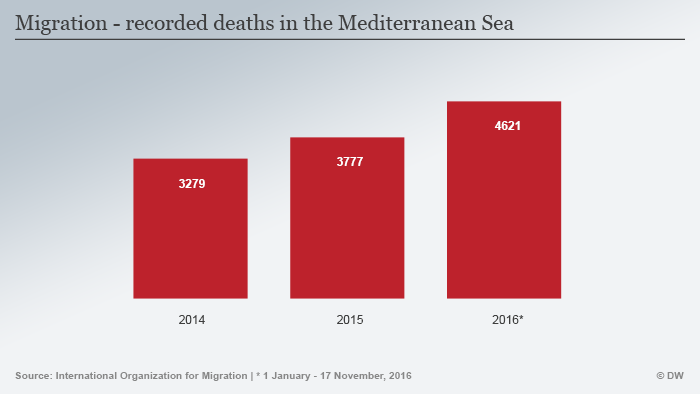 Many of those arriving from sub-Saharan Africa have left their countries due to issues arising from "population growth coupled with limited livelihood opportunities, high unemployment and poor governance and political and economic instability," IOM said.

Nearly 3,000 migrants have died attempting to make the crossing this year. While the figure is likely to increase before the end of the year, it is significantly less than last year, which witnessed 4,757 deaths on the Mediterranean.